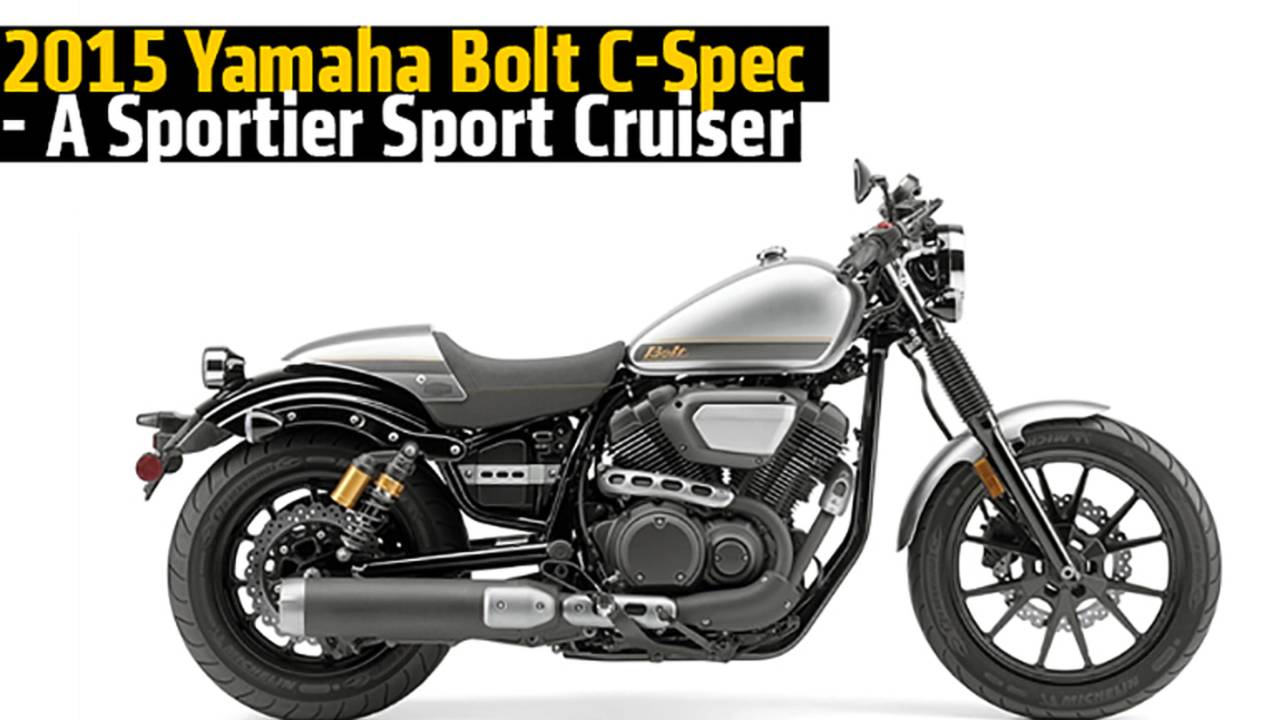 As everyone else jumps on the new tight-and-nimble-sport-cruiser bandwagon, Yamaha, arguably the first to enter that market with the Yamaha Bolt, has to keep up. Introducing the 2015 Yamaha Bolt C-Spec.

Smothered in “Cafe-Style components” (that's PR Speak), the most important things to note about the new C-Spec are its better handling aspects like performance tires, clip-ons, mid-controls are moved way back and a higher lean angle.

READ MORE: How To: Not be a Noob at a Track Day

Up front are 9mm longer forks and 6mm longer shocks in the rear, bringing the bike up 1.6-inch taller than the standard bolt. This makes hitting pot holes easier on your bike, but more importantly, it allows for a 37 degree lean angle, for those of you who ride cruisers hard.

The standard bolt has handlebars, which are abandoned for the C-Spec in lieu of clip-ons. This brings you more into the cafe-stance (hands go down, knees go up). The foot pegs are brought back 5 inches and are raised 1.25 inches. The speedo is also raised up and into your line of sight. The bike weighs 542 pounds dry.

The unveiling was followed closely with a huge amount of accessories, that are mostly visual items like see-through front sprockets.

READ MORE: Vintage Motorcycle Racing on the Beach - The Race of Gentlemen 2014

Yamaha has done a great job of building a simple, reasonably priced, good-looking cruiser, so rethinking the wheel with a new model or rehash wasn't necessary, this year. The C-Spec is a bit high, retailing for $700 more than a standard Bolt and still $400 higher then the R-Spec. That's an okay price for what you're getting; aftermarket parts would be more expensive, but still seemingly high.

I don't get pop-on tail sections like this one. Any most any production bike, they're ONLY visual and a pain in the butt if you try to double someone at the last minute or strap a bag to the fender. For the C-Spec it's really easy to remove without the need for tools, so I guess that's good enough.

We were able to sit on the new bike next to a standard, but haven't ridden it yet. The clip-ons are comfortable enough for what they are, producing a slightly-on-your-wrists feel very similar to a Triumph Thruxton or Moto Guzzi V7. The pegs do seem a bit cramped, compared to the standard which aren't true forward controls to begin with. The standard bike has a great, compromise between leaned back and aggresive--for a cruiser that is--with bent arms and relaxed legs. The C-Spec, is has the more traditional aggressive feel, like a tradition cafe bike, so Yamaha accomplished what they set out to do.
++
Got a tip for us? Email: tips@rideapart.com