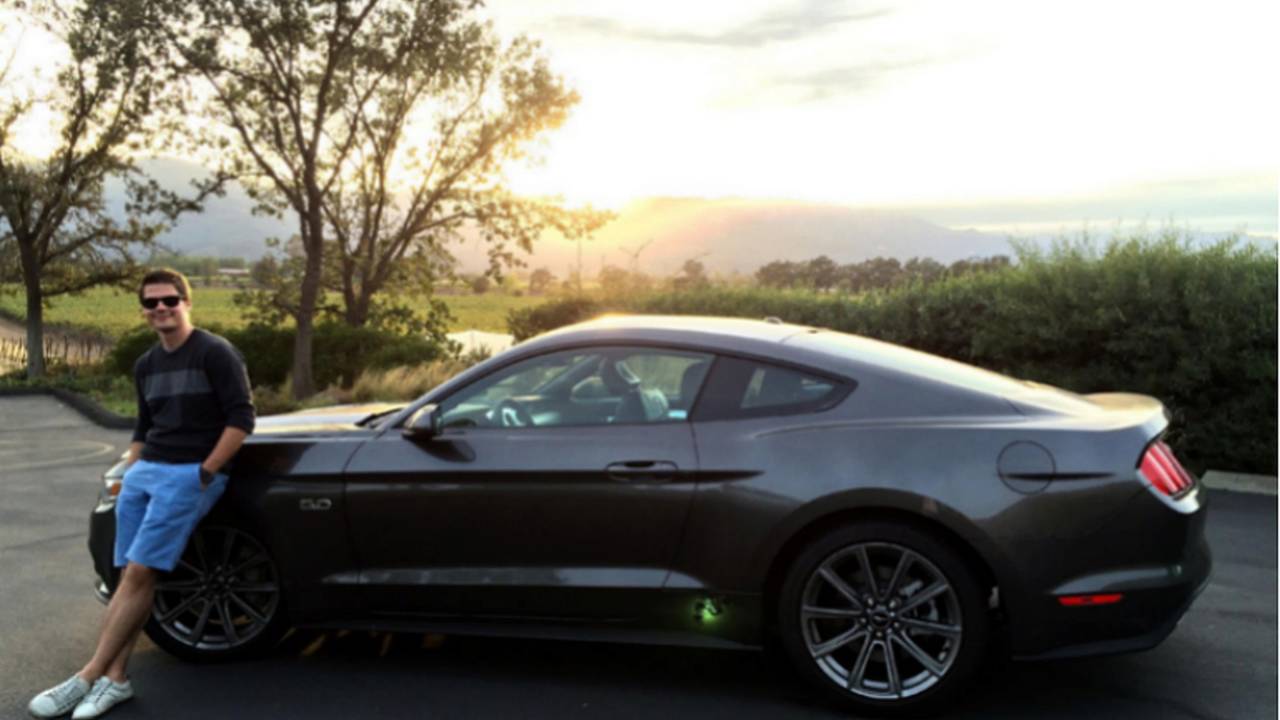 It’s 1:38am. Heart is pounding, beads of sweat are collecting across my forehead despite the A/C being on full blast, and across my face is the most appreciable smile imaginable. Why? Because after a 300-mile drive in my 2016 Mustang GT, I'm rewarded with a 40-mile stretch of winding road where speed limits are more like ignored guidelines, and the excitement is enough to make a grown-man say, “Can I go again?”

Now, let’s go ahead and acknowledge that the scenario above was not conducted by a professional driver on a closed circuit. However, when a car makes an average driver feel like Lewis Hamilton passing Sebastian Vettel in the last bend of a grand prix, then you know you’re gripping a particularly special steering wheel. The latest addition to the Mustang family is exactly that: special.

Before you start up the car, you’ll find it difficult not to smile at the loving touches that Ford has given it. In the hood scoops, you’ll notice blinker lights for the first time in a Mustang since 1967. Approach the door or unlock the car and you’ll see a pony projected on the ground on both the driver and passenger sides of the car. Whether male or female, I dare you to take someone for a ride that doesn’t instantly take notice and comment on this simple, yet cool, cosmetic addition. When you step inside, you’ll quickly notice that Ford didn’t just focus all of their efforts on redesigning the exterior. The interior of the car exudes quality. It’s not the hand-stitched leather that you’ll find in a Rolls Royce, but it’s quality that you’ll appreciate when you see the leather, hard plastics, and the “Ground Speed” displayed on your speedometer.

Although the option of Recaro seats is there and I wouldn’t blame anyone for opting for those body-hugging seats, the standard bucket seats on the Mustang are very comfortable and provide great support whether out for a leisurely cruise or some spirited canyon driving. While mentioning the bucket seats, I’d be remiss if I didn’t mention the back seats of the car. These seats are comfortable and well-crafted; however, space is definitely a luxury that doesn’t come standard. If you value blood circulation to your legs and space for your head—for the sake of your passengers, watch those speed bumps—or equip them with a helmet to account for the car's roofline. I’d sincerely advise that you treat this car as a two-seater. Put your girlfriend, wife, or significant other in the front passenger seat, start the car, hear the rumble of that 5.0 eight cylinder engine, and you’ll instantly feel the bliss of why you love cars, Mustangs, and driving in general.

So now you have a sense of just what it feels like to be around the car, enter it, and start it up. But how does it drive? In one word: wonderfully. Whether you opt for the manual or automatic with paddle-shifters, you’ll be in good stead. Note: My Mustang is an automatic—yes, I know it sounds like blasphemy, but when you factor in San Francisco hills, a daily commute, and the fact that the automatic is actually fractionally faster than the manual from 0-60mph, it makes sense. The Mustang has a bevy of options that give the driver the control they’re looking for no matter how they like to drive—from Comfort, Sport, Sport+, all the way to Track mode. Toggle that traction control off and step on the accelerator with confidence and you’ll find yourself doing your best Gymkhana impression. Speaking of acceleration, guess what? The Mustang has a lot of it. With 435-horsepower and 400-lb of torque you’ll be hard-pressed to not be outpacing most cars around you on a daily basis; despite the fact that this isn’t a car that’s been on a beach diet (it weighs nearly 2 tons).

Nevertheless, put your foot down and you’ll instantly be rewarded with a pull that’s enough to plant your head firmly onto your headrest. The car continues to accelerate in the midrange and is satisfying all the way up to the point you realize you need to slow down because you’ve quickly lost track of how many digits you’re seeing displayed on your speedometer. Rest assured, though, that when you decide to slow down, the car’s brakes are keen to support you—and quickly; braking distance from 70mph is a mere 157ft (as reported by Car and Driver).

The best way to describe the car’s connectivity and services is: Sync 3. Ford’s new media entertainment system is vastly improved over the much maligned Ford MyTouch. Touch screen inputs are prompt and function just as you’d expect many high-end tablets on the market would, and the resolution doesn’t leave anything to be desired. Introduce your Bluetooth device to the car and you’ll find that it quickly downloads your contacts and information and has you ready to safely make and receive calls from your steering wheel—despite the fact that at times it may feel like your steering wheel has too many buttons.

Ford has provided a great entertainment system and you feel like you definitely get what you paid for and more.

This isn't to to say the car doesn't have issues.

The Faults And Verdict

There have been noticeable hiccups with my iPhone connectivity when directly plugged into the USB port. Whenever I plug my phone in, it charges and connects; however, I’m commonly prompted with a message that “the device requires too much power,” which I have to press “Okay” and disregard.

This is a small gripe, but the amount of times where my phone has lost connection to the entertainment system in the middle of a playlist is frustrating, and often leads me to connect via Bluetooth instead of via the cable. I’ve noticed the same with my SiriusXM subscription’s reliability, which has seemed rather questionable whether I’ve been in the San Francisco Bay Area or Greater Los Angeles area. Hopefully some software updates from Ford could address these issues, but they’ve occurred often enough that I find them worth mentioning.

Gas mileage. I’ll keep this one short. The car is slated to achieve 16/25 mpg between city and highway driving, and your driving habits will largely influence this. Drive conservatively, and you’ll easily achieve 21mpg or more. Drive this car like you meant to when you bought it, pedal to the metal and roaring the engine, and you’ll easily see those mpgs flying out of your exhaust pipe and average in the 14-16 range.

But let’s be honest, you don’t buy a 2016 Mustang GT because you’re looking for great gas mileage; you buy it because you want to feel the roar of the engine, see the landscape blur around you as you speed off into the hills, and be reminded on a daily basis why you love cars. That’s exactly what this car makes you do: fall in love. Even after 10,000 quick miles, I’m still as in love with this car as when the car’s odometer read 0.000.