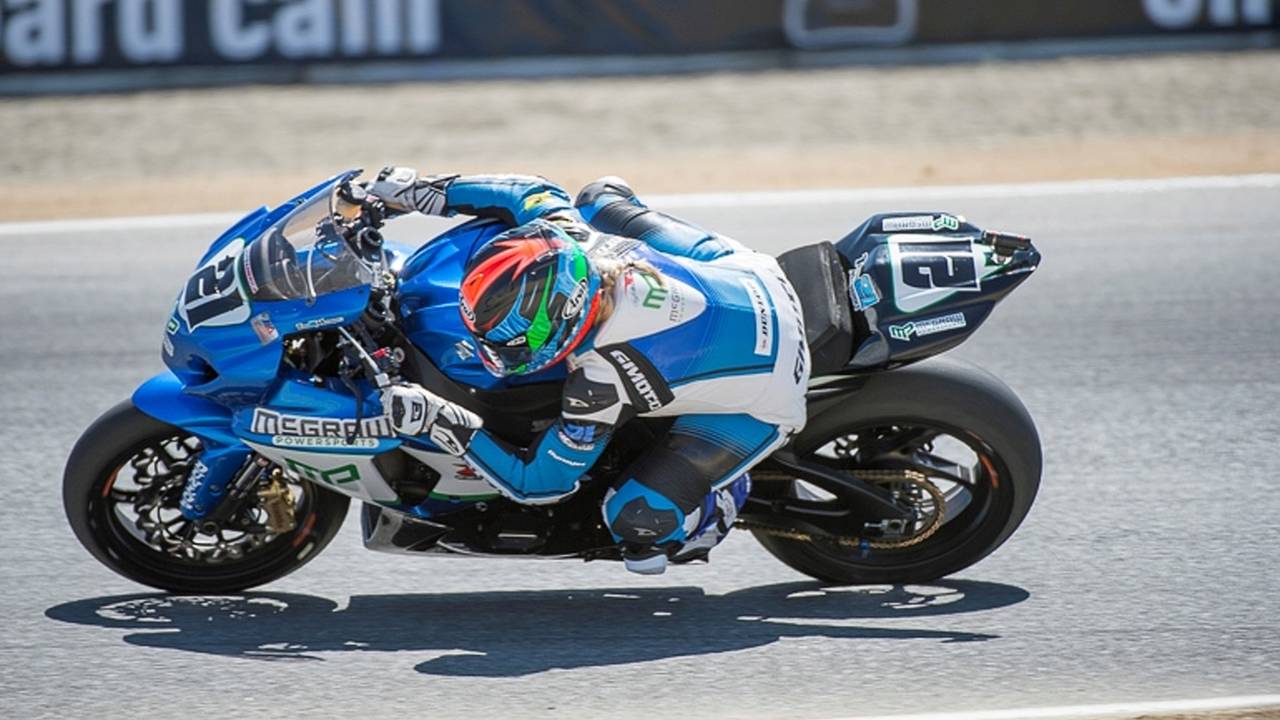 RideApart writer Laura Llovet explores reasons as to why Elena Myers will not be racing in MotoAmerica in 2016.

Back in July, I profiled Elena Myers. I not only mentioned that she is my favorite racer, but that she’s also a huge role model for women in the road racing world. The main takeaway from the story is that she’s hands down the most successful female American road racer.

On January 23rd, she posted the following statement on her Facebook fan page:

“It is with regret that I must tell you I have been unable to secure enough sponsorship to race in MotoAmerica this year. I know a lot, if not most of you, were wondering what my plans were so I thought that I would now let you know.

This is by no means the end of my racing days, but for now, I must be realistic. I plan to pursue other career avenues that will hopefully keep me in touch with you all. Who knows, perhaps in the future if the right deal or offer came my way you’d see me back on the grid.

For all the love and support, I want to thank you all from the bottom of my heart!”

To have her not race in 2016 is absolutely devastating.

To be frank, at first I genuinely did not believe this. I mean c’mon? No one will give Elena Myers a sponsorship? She has to be joking right? I initially took this to mean that she had other priorities in mind. She did marry a British racer named Dean Court in January, so maybe she wants to focus on her marriage and perhaps wants to start a family in the future. I mean there is just no way, no way she couldn’t get a sponsorship...

And then I stopped making assumptions. It doesn’t matter if there’s more to it than there is—at the end of the day, it’s her life and her business. However, the more I thought about it and took things face value, the more I 100 percent believe her when she says money is the issue here.

She opened up to CycleWorld for an interview, immediately after making her statement. She explained further:

“It really came down to money. At the end of the day, I wasn’t able to secure enough funding. Last year I struggled getting through the season. This year, I didn’t even have the funding that I had in 2015. I didn’t want to go into debt again.

This is a professional sport. If I can’t make a living between running the program and being a racer, I need to start working on another career so I can make a future for myself. I wanted that to be racing, but it’s just not in the cards for me right now.”

Before I started believing my earlier assumptions, I racked my brain for what I’ve read throughout her journey. For instance, in 2015, Elena started her own team and it was her first season racing a liter bike. All that time, she was consistently keeping her fans updated and produced some Team 21/Elena Myers swag to help fund her racing efforts. It has dawned on me that she’s been fighting a really tough uphill battle and unfortunately, for now, she has to take a step back.

One of Elena’s goals going into the 2015 season was to make a living on professional road racing. She mentioned to Cycle News in an interview that she was optimistic about the new MotoAmerica series generating income. She mentioned that back in ‘08, riders were able to pull in about 30-40k. Furthermore, she acknowledged how arduous it would be, since she had to strive to win races at each event to sustain herself and team. Elena also said that she was looking for 2016 sponsors in the middle of the 2015 season, hoping that she’d have a better shot at 2016 at getting sponsors.

As we can see, this didn’t come to fruition. Road racing is an incredibly expensive sport—just to cover a spot on the grid, you must secure at least one good sponsor and/or various ones. Furthermore, once the sponsors are secured to pay the bare minimum it costs to race a single race, you need to figure out a way to start making money off it to sustain yourself and pay the day-to-day bills. Again, for Elena, she’s facing strong headwinds.

However, I feel like the main issues here are twofold:

1) Elena’s goal when she started her own team was to make a living off racing, which proved to be difficult.

2) The reason she can’t make a sustainable living is because motorcycle racing in the US isn’t a popular sport.

You see, it’s nuts to think that despite placing fifth overall in the MotoAmerica Superbike class, as well as being the only woman to accomplish such a feat in the 39-year history of the class, Elena is unable to secure a sponsorship. That says A LOT about road racing as a sport in this country.

Perhaps we can blame it on the MotoAmerica marketing team, or the fact that those who wanted to view the races broadcasted had to wait a week after the event to watch them. Maybe we’re to blame; even though we are motorcyclists, most of us don’t give a shit about moto road racing. Perhaps it’s all, none, or some of the above.

MotoAmerica’s goal is to make moto racing in America relevant again, so they are most likely working hard to better market the sport and make us give a shit more. Perhaps I should give them a break as it’s only been in production for a year—these things take time after all. But how long will it take? Can MotoAmerica even rejuvenate relevancy of moto racing again in the US? We don't have the answers yet.

The fact that Elena can’t secure a sponsor is infuriating, disappointing, and disheartening. Here we have such a talented racer, who is a minority in one of the only sports in the world that allow both men and women to compete against one another, sitting on the sidelines due to the inability to not only make a living off her passion, but to even do the minimum; to simply race.

We definitely still have some amazing and talented women representing the US. I definitely don’t want to discount all the hard work that gals like Melissa Paris, Shelina Moreda, Patricia Fernandez, and many more have done. These ladies are still out there racing, so there isn’t exactly a dearth of female racers. However, it’s still a hard pill to swallow no being able to see Elena kicking ass out there on that 1000cc Suzuki in 2016…

Even if this is it in regards to her race career, Elena will always have a legacy that will continue indefinitely. As one Facebook user mentioned on one of her recent posts:

“Elena, just know that you helped inspire my two young girls to get started in motorcycle Roadracing. Thank you for that and we all wish you the best in your future endeavours. We truly hope to see you back out on the track. I'm sure we will.”

Elena Myers Court will always be a role model for women motorcyclists everywhere, no matter what the future holds.