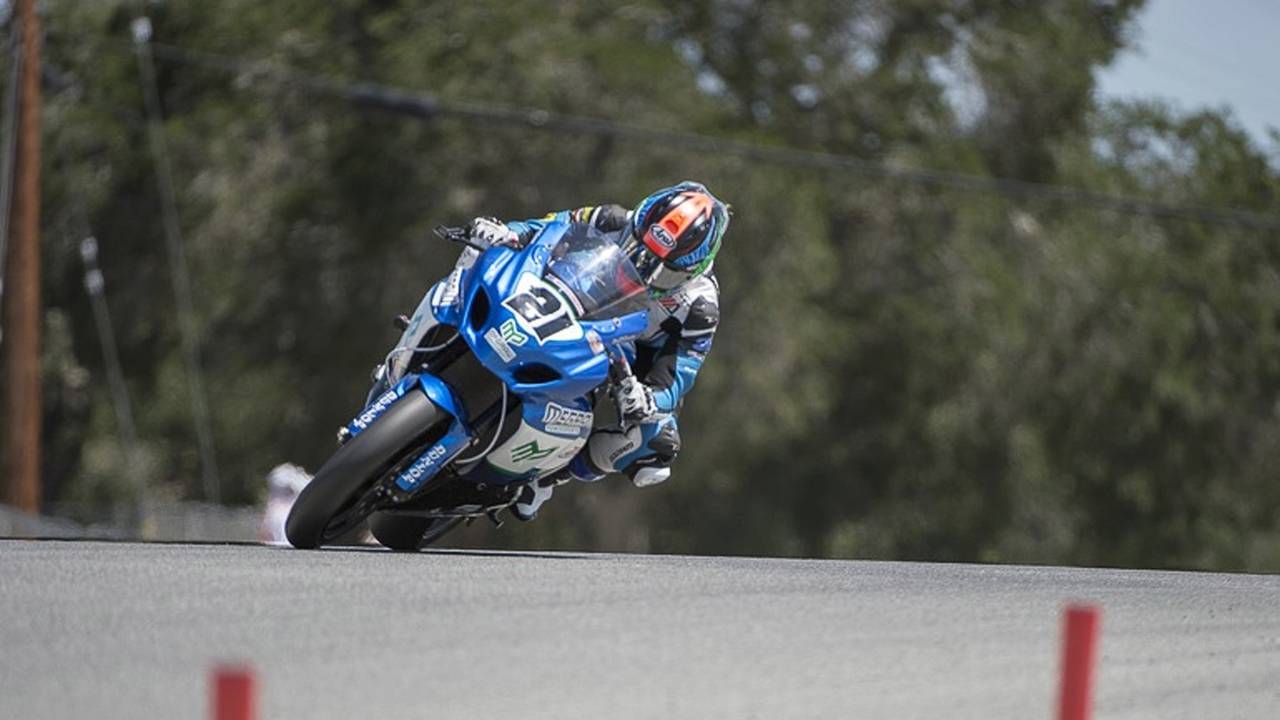 Elena Myers- American Road Racing's Leading LadyElena Myers is hands down one of my favorite racers. Of course, the fact that she’s a female road...

Elena Myers is hands down one of my favorite racers. Of course, the fact that she’s a female road racer has bit to do with it, but she’s come a long way to where she is now. She’s a huge role model for women in motorsports.

If you haven’t heard of her before, you're about to now: She’s a noteworthy road racer, who began riding and racing mini bikes at eight years old. A mere four years later she landed a spot racing on John Ulrich’s Team Roadracing World riding a ’97 Honda RS125 GP.

In 2010 at 16 years old (the minimum age required to turn pro), she made history  by becoming the first female to ever win an AMA Pro Racing sprint race at Infineon Raceway (formerly known as Sears Point and now known as Sonoma Raceway). She proceeded to make history again in 2012 in the AMA Supersport race at Daytona International Speedway: She became the first woman to win a pro motorsports race at the world-renowned racetrack.

Up until this point, Myers was on a GSX-R600, but changed this up in 2013 when she joined the Castrol Triumph team racing a Daytona 675. This move also encouraged her to physically move from California (where she was born and raised) to Birmingham—specifically Moody, Alabama.

“When I first rode for Triumph they wanted my teammates and I to all train together and they’re headquartered out there. One of my teammates had a home and family out there. My other teammate and I moved to Birmingham, which was an exit away from Barber. From California to Moody, Alabama...it was all for racing. It gave me an opportunity to get out of the house and kind of do it on my own. It’s been two years now since I left the nest,” said Myers when I inquired why she moved to the south.

She now resides in Atlanta, GA and currently has no plans to move anywhere else. “I moved to Atlanta since I didn’t particular care for Birmingham. There’s definitely a lot more going on in Atlanta, a lot more my speed,” she said.

Towards the end of 2014, Myers announced she was creating her own race team to compete in the newly formed MotoAmerica National Roadracing Series: Team 21 Motosport. She teamed up with McGraw Powersports Racing and upgraded to a GSX-R1000. This is her first year racing a Superbike, and is also the first woman to compete in the MotoAmerica’s most high-status class.

During the World Superbike weekend (July 17-19) at Laguna Seca, which also hosted the MotoAmerica races, I was able to interview Myers an hour before her second race. I must admit I was a bit nervous approaching her since, as I mentioned earlier, I’m a big fan of hers and admire her for all that she has accomplished thus far in the motorcycle road racing world. Thankfully, she was incredibly approachable and was very cordial when I introduced myself. I immediately felt at ease—it was like she already knew me and we were just catching up on things.

I only had so much times with her before she had to mentally and physically prepare for her second and final race of the day. It had been raining that Sunday, and it looked to be drying up before more dark clouds rolled on in and chances were that it may have rained again in the afternoon.

I could have asked Myers just about anything, but I was focused on her weekend races at Laguna and wanted some insight into her racer mentality.

LL: "Tell me a little bit about how your weekend has gone so far, including Race one and how that went and what happened there." (She completed Race 1 only completing 18 of the 23 laps.)

EM: "The first couple sessions of the weekend were tough. We had a few problems with my bike, but we kinda got that sorted at the end of the second session and was able to get in a pretty good time. Practice and Superpole was back to back, so that’s quite stressful to do that all at once. Usually our weekends are more spread out—with us being at World Superbike this weekend, we’re on their time.

But it’s great to be here. It’s my favorite track to go to and I’m happy to be here alongside the World Superbike guys. And it’s pretty cool because I’m on a superbike myself—certainly not up to par with their bikes, but nonetheless, it’s awesome to be here. I’ve been coming to watch the races here for a very long time.

But the first race was very very tricky—we had a wet warmup this morning. It went really well. I had an electrical issue at the end, but we fixed that for the race. It was a wet, but drying track at the start of the race. And typically, on our normal weekends we would have had a whole day to figure out what the track was going to do, but we kinda had to gamble with tires, and I unfortunately went the wrong way. I started on rains, other people started on slicks. It was really such a tough call to make because either way you don’t want to go out on rains on a dry track, but at the same time you don’t want brand new slicks on a wet track.

EM: "Well, we’ll see what the weather decides to do. It says there’s 100% chance for rain at 4 o'clock and we’re racing at 4:45 so we’ll see. We got both bikes ready to go either way, we’re going to be doing what we did this morning and gambling with tires. I hope we don’t have to that, I hope it’s one way or the other.

It’s been quite a year; it’s been a learning year for me as well. So for race two I’m hoping to make a better decision."

LL:  "What are you goals for the rest of the season? What are you trying to ultimately accomplish in this stage of the game?"

EM: "We’re at race seven of nine this year, so we got two left. One at indy and one at Jersey and those are spread out over the next two months, which is nice—it gives us a bit of a break. Gives us time to prepare for the last two rounds and hopefully make it count. I’m not sure where I’m sitting in the championship at the moment; I think 6th maybe, maybe 7th now. But I’m hoping to finish as the top privateer Suzuki in the championship. So that’s the goal and for that being my rookies year that’d be pretty awesome."

The next MotoAmerica race is taking place August 7th-9th at the Indianapolis Motor Speedway alongside with MotoGP.