Does Harley-Davidson's Electric Bike Live Up to the Hype? We Ride Project LiveWire 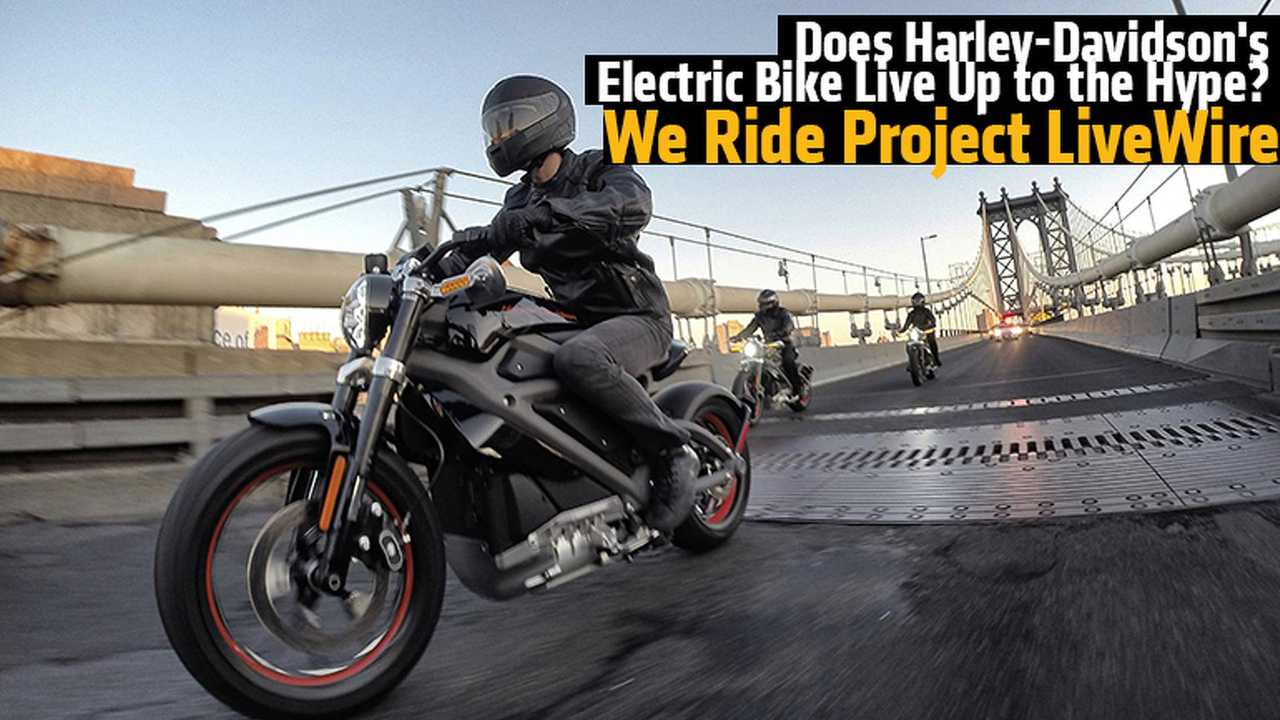 We ride Harley-Davidson's Electric bike to examine the impact the company has with a major first for the brand, Project LiveWire.

Unless you've been living under a rock with no Wi-Fi, you already know about Harley-Davidson's electric bike, Project LiveWire. That bike is so new, it doesn't officially have a name, as Project LiveWire is just that: a Project. The folks at Harley have leveraged the general public to help them promote the bike via social media, while providing input on the final production version. It's a motorcycle even your cager co-workers are talking about.

The first electric bike for the company, it's also the first time they've used an aluminum frame and arguably, the first sport bike from H-D. We've been a bit behind the times on this one, as H-D has offered very limited rides to the media and general public. While at the Progressive International Motorcycle Show stop in Long Beach, California we finally got the chance to take a quick ride on the bike that's been making news all across the globe.

Unfortunately, and like so many others', our ride was short - too short in fact. We pulled out onto Shoreline Dr. in Long Beach, the Queen Mary on our left, convention center on the right. The group leader riding a Harley Street 750 shouted, “Wait till that light down there turns green, I want you to feel the acceleration.”

This was after at least 20 minutes of preparation. We signed up, waited for our turn, listened to a long video presentation that said things like "some people are not used to the sudden acceleration, remember to use the brakes." Then we sat through a short coaching session where we heard things like, "no wheelies, no stoppies or the ride is over."

Starting the bike was pretty basic. Turn on the key, touch the LCD display for which mode you want, Range or Power, (of course we're gong for the more aggressive, Power mode) and then 111mph displays on the screen. That number selection is actually on purpose, as H-D is celebrating 111 year anniversary this year. Press the Start button on the right controls, identical to a normal H-D, but this time, no noise, no vibration and no smacking the throttle to keep it running, just silence.

The light turned green and the leader nailed it. With only 3/4 of the throttle pulled, it was a jolt of power that had us hanging on. Torque from an electric engine is so unique, that every time you ride one (unless you ride it everyday) it’s a complete surprise that leaves you giggling with joy.

It feels more powerful than a Zero and similar to the Energica Ego, with an estimated (H-D won't officially release numbers yet) 52 ft/lbs of torque and 74 hp. The guys at H-D said the bike makes power well up over its limited 10,000 rpm, but peak hp comes in at 8,000. As with all electric motors, power is instantaneous, with no torque curve.

We rounded the block and went through downtown Long Beach. Stopped at a red light with eight other motorcycles, we could hear a pin drop. It was a refreshing experience to pull off without a clutch and be able to talk to the car next to us;  more than one driver rolled down their window to ask what the bikes were. Riding the LiveWire bike meant no shouting and no sore wrists.

The route had no real twisties or hard corners, but we could tell that the bike was well balanced and has potential to be a performer. Low weight, narrow frame and proper ergonomics made it an ultimately fun, but far too short trip. The low pegs and tall bars made for perfect seating position that's not too aggressive. It would be a nimble, fun bike to run around town or commute on…well, a short commute as estimates say Power mode features a short 30-mile range, and Range mode only offers a mere 53 miles.

I find it comical that the front grips and controls are the same ones that H-D has been putting on bikes seemingly since the beginning of turn signals. I can’t figure out if I hate it or like it, as it is traditional Harley-Davidson. The PR speak is that Project LiveWire is a true Harley, but other than the grips and logo, you won’t find anything shared with any other Harley, be it a V-Rod or traditional air-cooled V-twin.

I was fearful H-D took another motorcycle, paid to claim it as its own, but merely picked the color and put an H-D badge on it as marketing filled the air with “Harley-Davidson designed the aesthetics of the bike.” That luckily isn’t the case, as the aluminum frame (the first ever for H-D) was designed and built by H-D along with most of the engineering of the overall chassis.

H-D worked with an outside company, who they wish to not mention (although we believe it to be Mission Motorcycles) on the design and construction of the drivetrain. To many readers that’s an immediate write-off of disapproval, but can you blame them? Skilled engineers have already made huge advances in the electric-motorcycle realm. Harley could have spent years and millions on engineering and design to merely produce something everyone else already has.

If you’re a hardcore rider and curious to know details past the promotional talk, we'll get down to brass tacks: the bike does feel a lot like a great motorcycle in general, even if it were gas-burning. It should be healthy competition for a Zero or Energica and a successful motorcycle when it’s finally built.

Of course there's no price point, but if it remains under $25,000, it should be a success for H-D. But has the bike already been a success for H-D? The company’s point of producing this bike is seemingly not to make money from the production, but to be published in Wired, Maxim, New York Times, Forbes, TreeHugger.com (yes, that’s a real site) and be seen on Jay Leno’s Garage. In that respect the bike has already been a major success.

This should be a case of customer and potential-customer engagement rather than a study on electric motorcycle development. You’ll soon find Harley in a modern-marketing mode with Project LiveWire, either as a huge success or big failure.

Harley has two trucks circling the country, that will head to Canada and Europe when they're done in the U.S. next spring. Along with the free demo rides were dyno pulls, where riders could sit on the bike, twist the throttle and watch the audio wavelengths on a jumbo screen. I even saw one person slip on the dyno from grabbing too much throttle. That did not make a pleasant noise.

The H-D truck display also had a Twitter vending machine (yeah, I didn’t know what the heck that was either) to entice people to Tweet about the experience. Tweet with the #ProjectLiveWire and the vending machine would feed you a free keychain and stickers.

The trucks were littered with hashtags with a huge emphasis on social media, more than I’d personally seen from any other company, motorcycle or not. Is it paying off? Well, you’d have to ask a H-D board member, because I sold my stock when I was a teenager.

The price will be way too high for me to personally be interested in buying it. I’d love to think it’ll be close to $20,000, but realistically, it’ll be more like $30,000-plus. The Energica Ego, which this bike will probably be tested against, will retail under $30,000, but no official pricing has been released. That bike can also do 100 miles on a charge and be fully charged in 30 minutes; I’d love to see similar stats with the H-D, but that’s probably not going to happen.