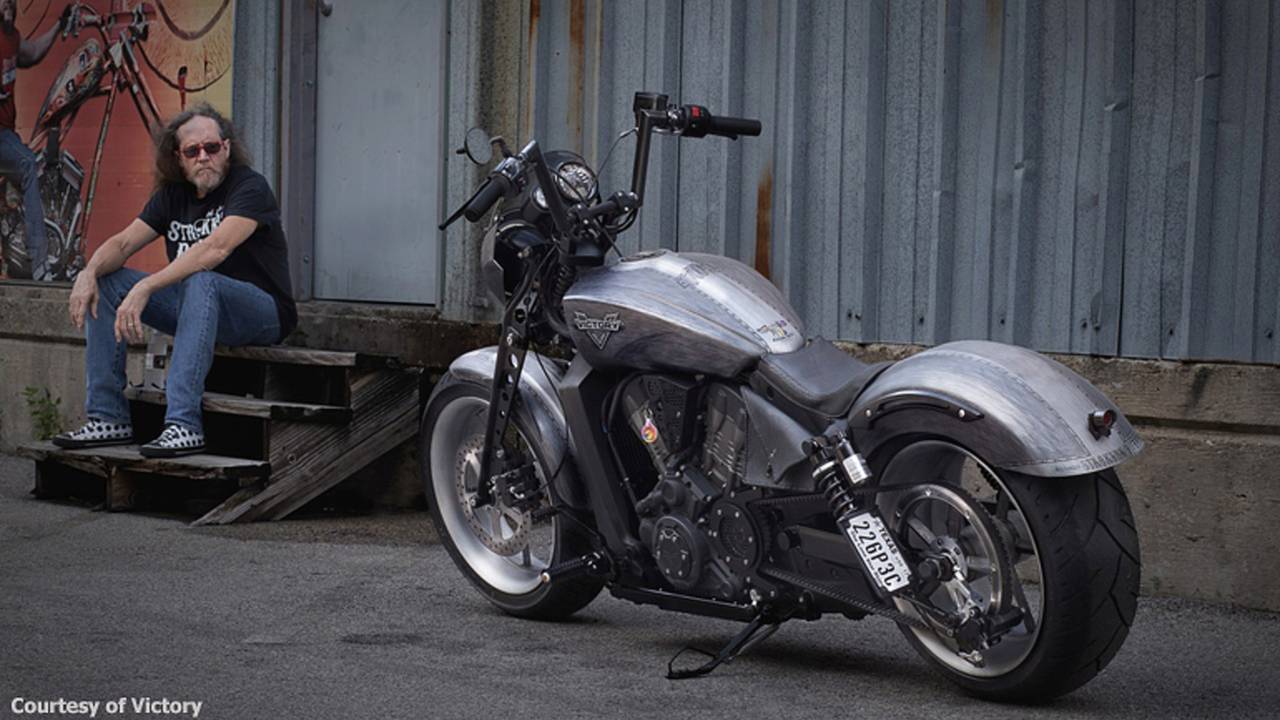 Rick Fairless has created a custom Victory Octane called Ethel, the Evil Octane. Based on a Victory Octane, this one off bike is cool as a Texas sunset.

Rick Fairless, the owner of Strokers Dallas and a wildly popular custom bike builder over the past twenty years, has created yet another cool custom cruiser that we thought you might enjoy taking a look at. As part of the Operation Octane custom builder contest being put on by Victory Motorcycles, Fairless offers up his entry in hopes of earning the $5000 grand prize the manufacturer is offering for the best customized Victory Octane.

His latest build, called ‘Ethel, the Evil Octane’, is a departure from his usual colorful customs, featuring gray and browns, sharp and aggressive lines reminiscent of a bad-ass muscle car.

“I wanted to make Ethel a tough, street fighting broad! I love the lines of the Octane, so I wanted to make one mean and nasty,” explains Fairless. “My wife and I own three English sheepdogs. The youngest one is six months old and she is extremely cute and lovable, but she is wild and crazy, like a demon dog. Her name is Ethel and that’s why I named this bike ‘Ethel, the Evil Octane’.”

Fairless says the toughest part of the build was designing and making the Girder Front End, but this and the 180mm front tire are the design features he’s most proud of. Others would argue the exhaust is the highlight; a beautiful 2-into-4-into-1 number that the Strokers crew fabricated by hand. The Octane’s standard front fender was widened 5/8” while the rear fender was shaved and widened by 2” in an effort to subtly change the appearance.

“Every bike I build is built to be ridden,” Fairless confirms. “Ethel runs great. I took her out for a long ride just yesterday. She feels, looks and runs like a mean, pissed off woman with a bad attitude, compared to a stock Octane which is like a sweet gal next door. My objective was to build an Octane that was different from what any other builders have done. I am very happy and proud with the outcome of Ethel.”

Victory Motorcycles launched a custom build competition for its dealers called Operation Octane back in August. Dealers must submit their final build photos by the 24th of October. A two-week period of online voting will then open from November 14 – 28, where everyone can vote for their favorite build. The top two winners in both North America and the rest of the world will be notified on November 30. First place wins $5,000 and second place wins $3,000.