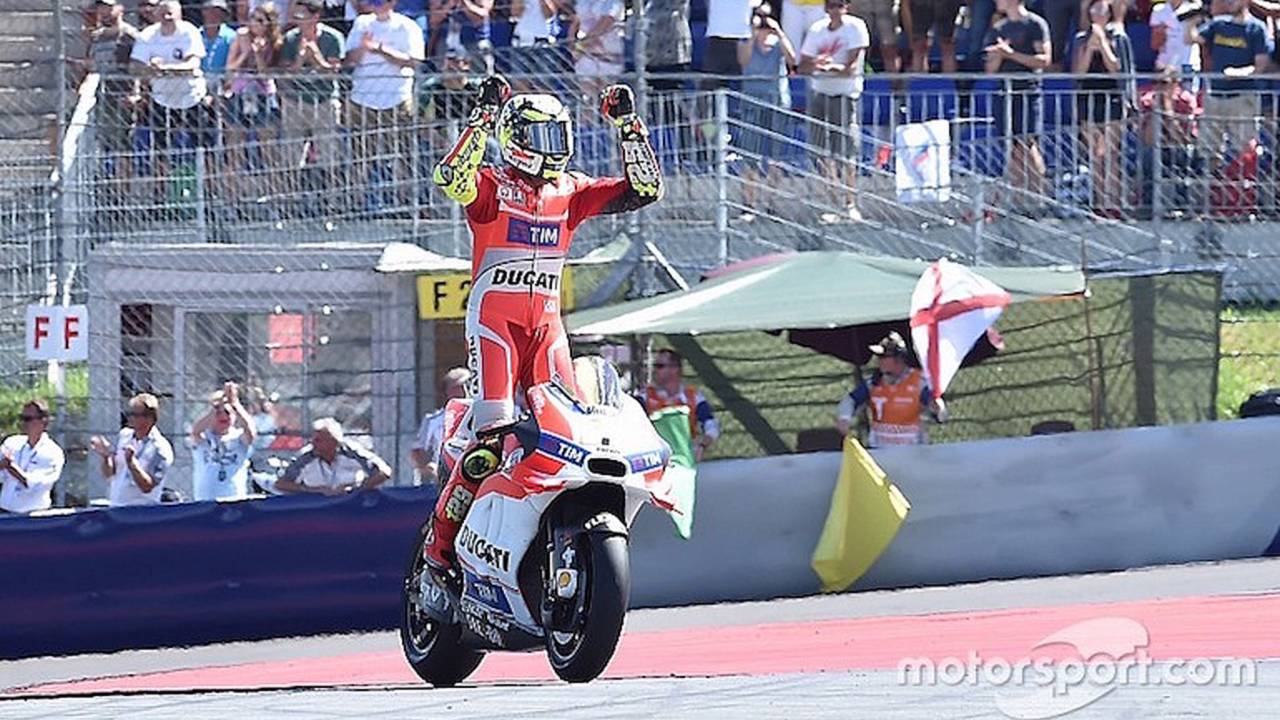 It was Ducati’s first MotoGP win since Casey Stoner at Phillip Island in 2010, their first 1-2 since 2007 at the same venue. The top six bikes fought a stunning duel in the early stages, with Dovizioso grabbing the lead from teammate Iannone just after one-third distance.

Lorenzo headed early-leader Valentino Rossi for the duration in third, with Honda’s Marc Marquez and Suzuki’s Maverick Vinales in touch over the opening stages but falling off the leading pace in the second half. Iannone passed Dovizioso for the lead with eight laps remaining. In the closing stages, the Ducatis pulled away to make it personal duel between them in the sprint to the finish line. Iannone kept his nerve out front to score a superb maiden victory at the top level, heading Dovizioso, Jorge Lorenzo, Rossi, Marquez and Vinales.

Iannone, who will move to Suzuki in 2017, is the first Italian to win for Ducati since Loris Capirossi at Motegi in 2007. It also consigned Dovizioso’s losing streak, which extends to Donington Park in 2009.

Story of the race

Lorenzo took third at Turn 1 on lap two, as Iannone repassed Rossi and Dovizioso divebombed Rossi at Turn 3, which allowed Lorenzo past both of them.

Rossi retook third briefly from Dovizioso at Turn 1 on lap three, who simply powered past him on the exit until he outbraked himself at Turn 3. Marquez slipped past Rossi for fourth in the middle of all that – Rossi having a big moment of his own at Turn 3 as he ran too deep.

Lorenzo took the fight to Iannone, and passed him briefly at Turn 3 on lap four, but again the Ducati dragged back past him in the straight line.

The top six ran in tandem over the first 10 laps, with Iannone holding sway from Dovizioso, Lorenzo, Rossi, Marquez (who fell back after a big moment at Turn 3) and Suzuki’s Maverick Vinales.

Iannone, uniquely, took a tyre gamble of a soft front and medium rear. Dovizioso, on the conventional medium-hard tyre strategy, passed him for the lead just after one-third distance, with the Yamahas (both using medium-hard tyres) still glued to the rear of the Ducatis.

Another big moment for Marquez at Turn 1 dropped him and Vinales well away from the lead battle.

With 10 laps to go, the top four were in-line astern, with Dovizioso leading Iannone, Lorenzo and Rossi.

Iannone grabbed the lead with eight laps remaining at Turn 8, as memories of their last-lap collision in Argentina sprung to mind. The Ducatis pulled a second over the Yamahas as the true sprint to the finish began.

Iannone banged in a new lap record with four laps to go, but Dovizioso was just a quarter of a second behind with two laps remaining. Lorenzo had a half-second buffer to Rossi.

Iannone held his nerve for his maiden MotoGP win, 0.9s ahead of Dovizioso. Lorenzo was third, over 2s back, ahead of Rossi. Marquez was a distant fifth, but held off the challenge of Vinales throughout.

Avintia’s Hector Barbera was disqualified from seventh, as he failed to serve a ride-through penalty for jumping the start in time. Cal Crutchlow, Yonny Hernandez, Alvaro Bautista and Stefan Bradl were also pinged for jump starts.

Redding passed Laverty with 12 laps to go, dropping Laverty into the clutches of Bradley Smith’s Tech 3 Yamaha, who passed him for ninth at Turn 4.

Smith’s teammate Pol Espargaro grabbed 10th from Laverty in the closing laps, and Laverty fell on the final lap.

Aleix Espargaro was the race's only retirement, pulling into the pits late on from outside the top 10.