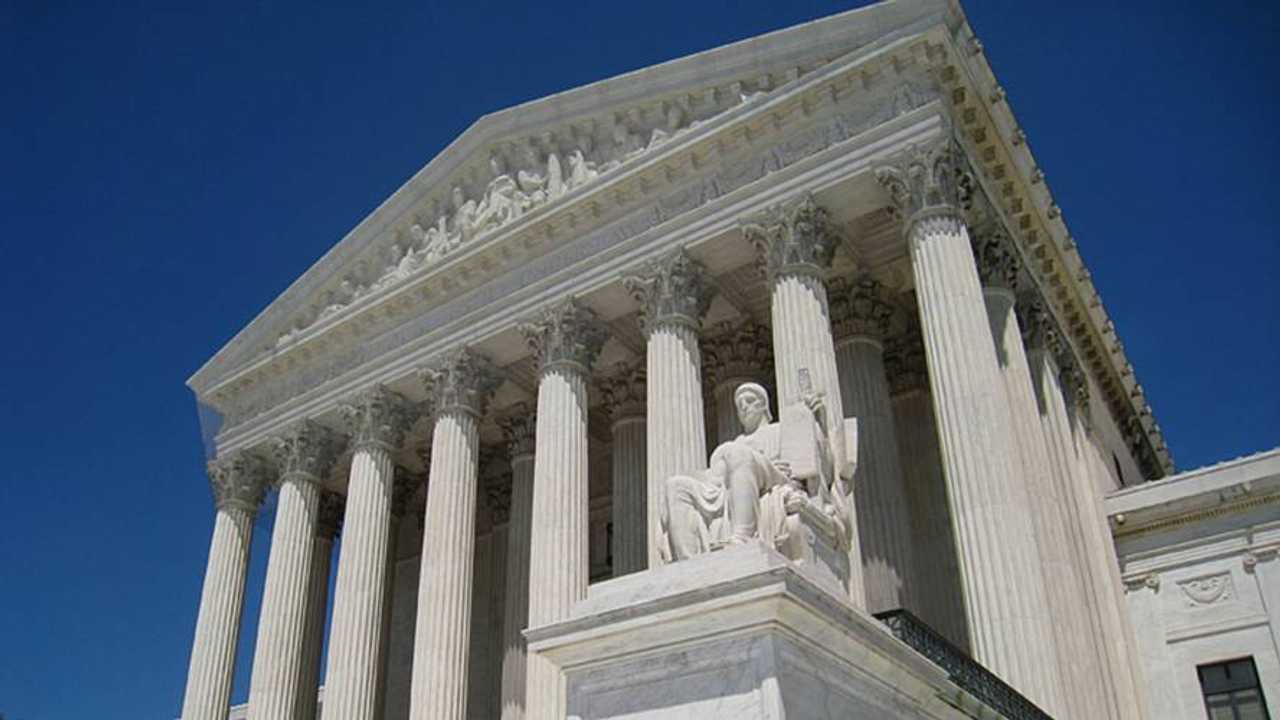 A debate over the Fourth Amendment is resulting in a case involving a stolen motorcycle heading to the highest court in the land.

Justices vote 8-1 in favor of motorcycle thief, arguing his fourth amendment rights were violated when a cop walked onto his property and lifted the cover on a stolen bike

A verdict has just been handed down in a United States Supreme Court case involving a stolen stretched Suzuki parked under a tarp outside a house.
Back in January we told you about a 2014 Virginia motorcycle theft case that was argued all the way up to the Supreme Court. Now, several years after the initial incident, the highest court in the land has concluded that the defendant’s fourth amendment rights were indeed violated when a Albemarle County, Virginia, police officer strolled onto the defendant’s (or rather his girlfriend’s) property, lifting a cover to reveal a stolen motorcycle.
Essentially this case boiled down to the fourth amendment, and more specifically, curtilage. Curtilage is basically the land/area surrounding one’s house, and while this sounds simple, defining curtilage is anything but. Another important tidbit that is relevant to the case is the “automobile exception” which allows certain types of searches to be conducted on vehicles without a warrant since, unlike a house, cars can be moved at a moments notice.
In this particular case (Collins v. Virginia, 16-1027), Justice Sonia Sotomayor asserted the search was an "invasion of the sanctity" of Collins’ curtilage. Regarding the automobile exception, Sotomayor contended it "does not justify an intrusion on a person’s separate and substantial Fourth Amendment interest in his home and curtilage”.
The Supreme Court Justices voted 8-1 in favor of Collins, with the one dissenting voice being that of Justice Samuel Alito. Justice Alito maintained the police officer’s “brief walk up the driveway impaired no real privacy interests.” "The tarp-covered motorcycle parked in the driveway could have been uncovered and ridden away in a matter of seconds," wrote Alito.
So in the end, Collins’ receiving stolen property conviction previously handed down by the Virginia Supreme Court was overturned, though the US Supreme Court has yet to close the book on the potential for Collin’s convictions to be upheld on different grounds.
Source: Bloomberg
https://www.bloomberg.com/news/articles/2018-05-29/supreme-court-backs-privacy-rights-in-motorcycle-search-case

It's not often that motorcycle-related legal cases end up in the Supreme Court, but that's exactly what's happening this very moment as the result of a dispute over a stolen bike in Virginia. The case focuses on the Fourth Amendment, and whether or not Virginia police violated said Amendment during a 2014 investigation.

First, for anybody who slept through middle school, the Fourth Amendment prohibits unreasonable searches and seizures and requires any search warrant to be judicially sanctioned and supported by probable cause. So with that in mind, let's go back half-a decade or so to Albemarle, Virginia, where this all starts.

According to The Roanoke Times, Ryan Austin Collins allegedly stole a motorcycle which he then used to evade law enforcement on more than one occasion. At one point, Collins opted to post photos of the bike in question to his Facebook page (Yeah, I know...). Even after Collins' social media posts, local law enforcement was still unaware of the exact motorcycle Collins had stolen/used. The only thing they did know is that it was was a black Suzuki.

Fast forward a couple weeks and a cop on patrol happened to be passing Collins' home when he spotted a motorcycle parked outside under a cover. The officer then proceeded to investigate by lifting the bike's cover to reveal the infamous black Suzuki local officials had been searching for. Keep in mind the officer did not have a search warrant when lifting the cover on the black Suzuki in Collins' driveway.

This resulted in the arrest of Virginia's wannabe "Ghost Rider" and, despite the argument of his lawyer, local courts ruled the aforementioned officer's actions were not an unreasonable governmental intrusion. Collins was found guilty and sentenced to three years. After appealing his case, the ruling was upheld by the Virginia Supreme Court. Collins then got a lucky break when a former law clerk for U.S. Supreme Court Justice Clarence Thomas decided that the thief's case needed to be presented to the highest court in the land; The United States Supreme Court.

READ MORE: Watch This CBR600 Run From the LAPD While Stunting

This is a pretty interesting case. Collins was found guilty of the crimes he was charged with, but the officer who snooped under the bike cover in his driveway may very well have violated his rights. I personally have no sympathy for bike thieves, but I'm fascinated to hear what will happen when this case goes in front of the Supreme Court on January, 9th. If you're really, really into the legal ins and outs of this case, check out SCOTUSBlog for more info.