Triumph and Tribulations: 10 Days in the United Kingdom 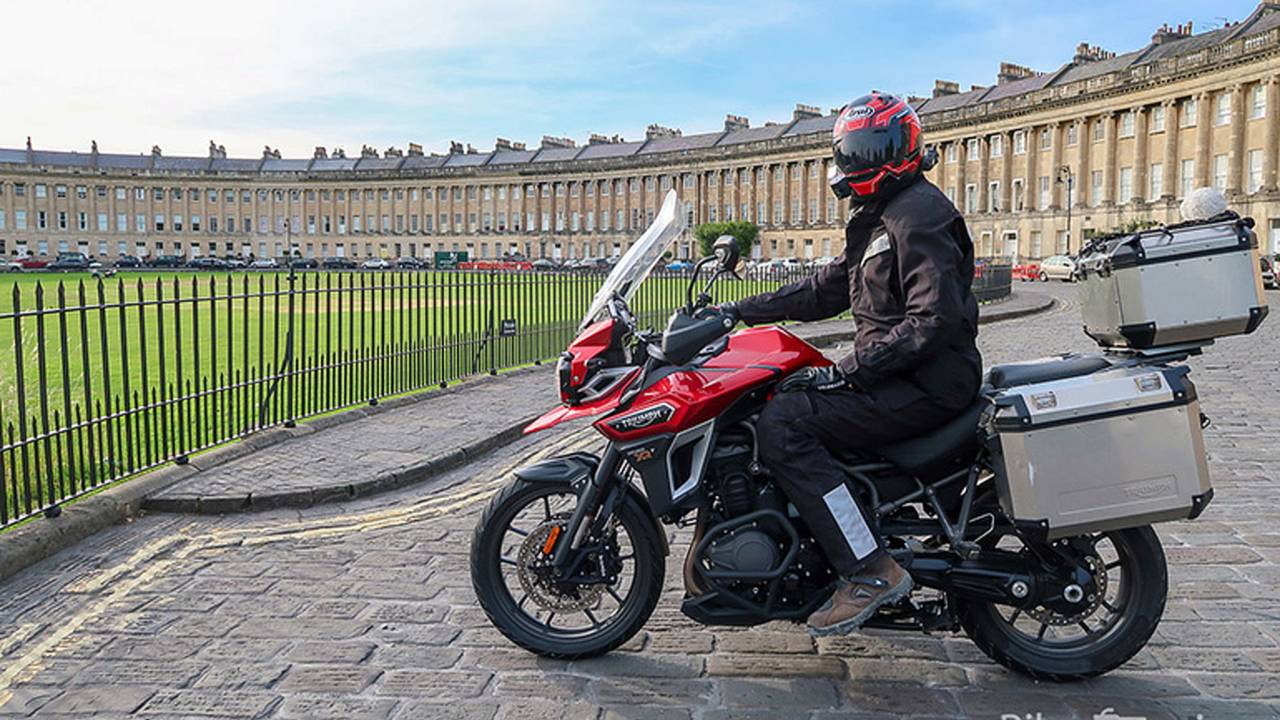 Abhi Eswarappa hits the road in Britain, checking out bikes and becoming an unintentional sponsor of Croatian meat goods.

An employee of the London Underground is summing up the ticket situation for my girlfriend and I in only the way a Brit can. Little does he know that he easily could have been describing our 30-hour odyssey from Los Angeles to London - multiple flight delays, lounge closures, and a bed and breakfast we couldn't check into on the first night. A bit shit, indeed.

There's no higher purpose to our trip - this isn't about self-discovery or making a difference. We simply love motorcycle travel, and we figured the United Kingdom was worth a visit this year as Brexit had made the currency exchange a bit more favorable for Americans. I'm a big fan of adventure bikes for on-road touring, and it only seemed appropriate to use a Triumph if we'd be starting in England. That's why we found ourselves on a Triumph Explorer XRT adorned in a lovely color that Triumph calls Cranberry Red.

Our trip may not have started flawlessly, but all of my hassles disappear the next morning as I swing my leg over the bike. Now my focus is simple: stay on the left side of the road! Riding in foreign countries is a joy but each nation has its own set of challenges. My main frustration with England? It isn't staying on the correct side of the road - it's speed cameras. They're everywhere, and it feels draconian. What happened to the sport of speeding until you see a police officer and slowing down to pretend like you've been under the limit the entire time?

VyVy and I get out of London and immediately start acting like tourists. The first day includes visits to the famous henges preceded by Wood and Stone:

As we leave Stonehenge, I can't help but notice a Piaggio scooter that looks like it has some stories. There's a random collection of stickers and the odometer shows over 45,000 miles - now my curiosity is really piqued. I take a few photos and make a mental note to investigate the stickers later but the owner enables my lazy side by appearing a few moments later and sparing me the research.

He knows all about the Explorer and asks me some questions. I, on the other hand, know nearly nothing about Piaggio's scooter lineup. Choosing not to expose my ignorance, I instead ask him about his journey and the stickers. He's on a tour that started from the city of Osijek, Croatia, and he's averaging 350-mile days as he tours through Europe.

My last question is about the large "Dobro" sticker on his trunk, and he responds by opening the trunk and presenting me with a pack of dry-cured pancetta. Huh? Turns out Dobro is a meat company based out of Osijek and they're sponsoring his trip. So he's been getting photos of people with the product... and that's why I've now got a photo of me giving a thumbs up to meat I've never tasted or had even heard of before:

Packing for an international motorcycle trip can be difficult. Space is at a premium on the flight and on the bike, so you must bring versatile gear. I've brought my Aerostich Roadcrafter R-3 because I knew it would be perfect for the inevitable cold and rain of English weather. Only problem is, the weather gods have different ideas. Britain is going through a heat wave - in fact, our third day here is the warmest 24-hour period in June the country has seen since 1976 (The same day I was learning to flat track –Chris). As is the norm nowadays, many complaints are lodged about this on social media.

Before I took off on this trip, I had asked my readers at Bike-urious for recommendations and one of the most popular suggestions was the Sammy Miller Motorcycle Museum. Who am I to ignore such sage advice? It's one of the world's largest motorcycle museums and it's all due to the superhuman efforts of its namesake, Mr. Sammy Miller. Sammy was successful in a wide variety of motorcycling disciplines, but it was in the sport of trials that he became a legend. In addition to winning more than 1,300 trials events, he helped both Bultaco and Honda develop trials machines. His Ariel HT5 (named GOV 132 after the digits on the license plate) may just be the most successful competitive motorcycle in history, with 161 championships between 1957 and 1964.

When we arrive we're greeted by a very pleasant fellow who simply calls himself Volunteer Dave. He's unassuming but he's got some great stories, including one about his father who had some success racing AJS' offerings in the 1920s. He wasn't a works racer but after he got in touch with the factory and proved that he was competitive, he'd reach out when he needed a new part like a piston and they'd forego the OEM spares in favor of something special to keep him at the front of the pack. As they say, "if you ain't cheating, you ain't trying."

Dave kindly takes a moment to talk me through the collection. He tells me that the museum started when Sammy got his famous GOV 132 back, and it has grown to approximately 380 bikes. Around 12-14 of them are one of a kind. Each room has a theme, like the "Racing Hall," "Trial Bike Hall," or the informally-named "Evolving Classics." In Dave's words, that represents "when Japanese bikes came over and we thought they'd all be crap... they all still work like Swiss watches."

I could spend three days here, but simply do not have the time. So, I make up for that by taking lots of photos. In no particular order, here are 10 of my favorites:

As a younger American rider, it's tough to get a sense of how dominant British bikes once were. It's easy to stereotype and make jokes about how they leak oil and got their asses kicked by the Japanese. But as I walk up and down rows of beautiful motorcycles, this museum opens my eyes to the advancements the Brits made a century ago. I alternate between expressions of wonder and sadness - every time I discover something fascinating or a new manufacturer I've heard of before (Haythorn, Ascot Pullin, OEC, ABC, Duzmo), this museum feels more tragic. Is it a museum or a cemetery? Whatever you call it, it's worth a visit. But eventually I have to pull myself away because Vy and I have to meet an ex-Isle of Man TT racer tonight and we need to get back on the road.

Before we leave, Vy mentions that while I've been staring at bikes, she's noticed 14 teddy bears all around the museum. I just look at her with a puzzled expression, but on our way out we ask Dave about the stuffed animals. Turns out that the dynamic of "interested guy with disinterested girlfriend/wife/kid" isn't rare, so the museum has hidden teddy bears to entertain visitors who aren't crazy about bikes. Guess it worked, because Vy managed to find all 14 without knowing that this was a game to play in the first place.

She is rewarded with a certificate, so she's getting more from the museum than I am! Or so I think. After we wrap things up with Dave, he asks if we'd like to meet Sammy. A moment of silence ensues as I figure out if he's joking or not, before Vy elbows me and I come back to reality. I offer up a confused "Yes?" and Dave tells us to follow him.

Dave talks to Sammy for a moment and then the legend himself beckons us inside. There's no way this is happening. Sammy shakes Vy's hand and pulls her inside the shop. OK, I guess this is happening. I can't believe how nice he is. He has no idea who I am but still humors me for 20 minutes, talking about his museum and the bikes that he's working on at the moment. He even wraps up our conversation by offering to let me try an Adler that would be finished later in the afternoon. I decline because we're already running late. I'm a fool.

Back on the road, we trade mechanical beauty for natural beauty with a quick stop along the Jurassic Coast and the Durdle Door.

Then it's off to Bath, so named because the Romans originally used it as a spa. Even if you're not planning on getting wet, there's plenty of beautiful architecture to soak up.

A few months ago, I had been introduced via email to an ex-Isle of Man TT racer named Richard who lives near Bristol. Like many Britons, he watched the IOMTT in person as a young man and loved it. Yet he figured it would be much more fun to participate instead of watch, so a few years later he was on the course himself. I'm in awe of the people who race in general, but I simply can't comprehend the courage it takes to compete on one of the deadliest courses in the world.

From a New York Times article last month: "'If Roger Federer misses a shot, he loses a point,' said Richard Quayle, a former TT winner. 'If I miss an apex, I lose my life.'"

Like all the TT competitors you hear about year after year, Richard is apparently missing the gene responsible for self-preservation. He competed in '84 and '85 - the first year he was leading the newcomers race when the motor seized 4 miles from the end. The next year, he was 6 seconds shy of setting a 100 mph lap in a 6th place finish. The same pattern of behavior appeared when Richard decided to visit Le Mans for a 24-hour race. From 1986 he found himself competing in the Endurance World Championships for three years. Eventually, the responsibilities of having a family caught up and he hung up the race leathers, but he does have a beautiful Ducati 916 that he enjoys on the street. His passion for motorcycles is contagious, and one of my highlights of the trip is simply enjoying a pint and listening to his stories. Racers are nuts.

Vy and I say our goodbyes to Richard and head toward Wales for our first border crossing. Before we can hop on one of two bridges (the Severn Bridge or the Second Severn Crossing, I'll give you one guess as to what the river's named), we see a sign notifying us that there will be a toll. There's pictures of a car, semi, and a bus, but no motorcycle, so I assume that motorcycles get to cross for free. I stop at the toll gate to confirm with the attendant that there's no fee, but by the time I can get my face shield open she has already opened the gate and politely says: "What are you doing? Go!"

Don't have to tell me twice.