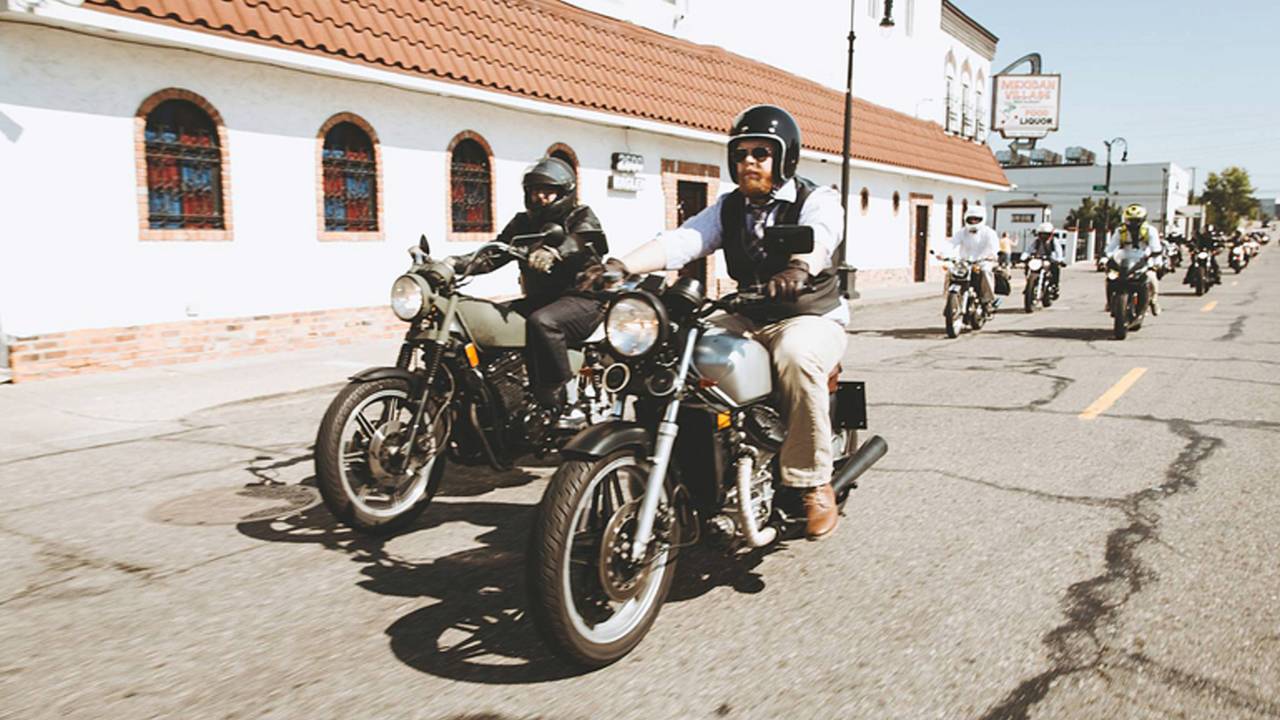 Wherein Motul sends Jason a box full of oil and it turns out to be the best thing that's happened to him all year.

Wherein editorial privilege, luck, and a box full of oil fixed everything

One of the better perks of this job – aside from the whole "write about motorcycles professionally from the comfort of my home office" thing – is that companies will just send me free stuff if I ask for it. The catch, of course, is that I then need to use whatever stuff they sent me and write a review about it. This is called selling out product testing. Today, I want to tell you about the time a little product testing for Motul saved me from almost certain defeat and made my elderly Yamaha more enjoyable to ride.

A few months ago, someone at Motul contacted me with a proposition: "We'll send you some fluids if you put them in your bike and test them out." I was game, and my bike needed an oil change. They needed to know about my bike and riding habits to match me with the correct motor oil and other fluids, so we had a little chat about it that went something like this:

Motul: (In an extremely thick French accent) So, what kind of motorcycle do you ride?

Motul: That, ah, that is very old. Do you own anything newer?

Me: It's the newest bike I have!

Motul: We'll get back to you.

The elderly triple in question

That's how I recall it, at any rate. In fact, despite being a little surprised that I wasn't riding something newer, my guy at Motul found exactly what I needed pretty quickly. I got an email from him not too long after our conversation telling me that the oil was on its way, as well as something a little extra. Turns out it was two somethings extra in two different boxes.

The first box that showed up was too small and light to contain a bunch of motor oil and gear oil. What could it be? Was it some kind of ultra-lightweight oil? Did they ship it in bags? It was from Europe I thought, so It could be some kind of advanced oil shipping technology we don't have here in the States because we like old things and innovation is anathema to us. Turns out that, Instead of oil, the box was packed with swag related to Motul's new line of TWIN V-twin oils: a product they recently put out designed specifically for Harley-Davidsons and other hard-working V-twins. There was a trucker hat, a T-shirt, an enameled metal mug, a beer koozie, enough stickers to plaster a house, etc. – all of which my daughters immediately made off with.

About a week later, a bigger, heavier box showed up. My oil was finally here! This box contained four quarts of Motul's 5100 4T 10W-40 synthetic motor oil, two liters of 80W90 mineral-based gear oil for my middle and final drives, and a big, black spray bottle I wasn't expecting. Turns out this was the second something extra Motul sent me: a big ol' bottle of E2 Moto Wash. I was like: "Moto Wash? Psssssh. When am I gonna use that?"

Remember I said that for later.

Excited at the prospect of doing some product testing and writing a story about it, I put all the fluids back in the box, carried it out to the garage, plopped it on my workbench and... immediately dropped the ball and forgot about it.

My collection of fine Motul products

Well, "forgot" is kind of a strong word. More like I kept putting it off because I was hip-deep in work and didn't want to take the time to change my oil because, "Eh, it's fine," and because there was always next week to do it, right?

Fast forward to mid-September. About a week before the 2017 Distinguished Gentleman's Ride I sauntered out to the garage to fire up the Yamaha and... it wouldn't start.

"That's odd," I thought. "This thing was running fine a couple days ago."

I went through the usual checks – I made sure the battery was firmly connected, wiggled the kill-switch, tried the kickstarter, etc. The bike still stubbornly refused to start. Then I was like, "Is it out of gas? It can't be, there should be about a half a tank in there."

You know what's coming next, right? Of course you do. I stood the bike up, rocked it back and forth, and no sloshing came from the tank.

Now, I knew full well that there had been a half a tank in there not two days earlier. That's when the fear hit me. See, Yamaha XS-series triples have vacuum-operated petcocks, which means, in theory, you never have to touch them unless you need to prime your carbs or flip to reserve when you run dry. Fancy, eh? Well, the problem is that these things are a well-known failure point because the seals inside the petcocks go bad and end up draining all the fuel out of the tank. Where does that fuel go? Through the carbs, into the engine, and eventually down into the crankcase where it dilutes the oil and becomes The Dreaded Gasoil. More than one inattentive triple rider has lost an engine to The Dreaded Gasoil.

Most triple riders replaced their OEM petcocks long ago with manual units, either due to failure or to get ahead of the problem. Me? I never bothered. Mine worked fine and were still going strong at 37 years old and counting, a fact I was sinfully proud of. Was being the operative word here, because at that moment I was sure that my petcocks had finally failed and The Dreaded Gasoil was upon me. Fully convinced that I was in serious trouble, I propped the bike up straight, wiped the grime off the oil sight glass, and my greatest fears were realized – the crankcase was full of gasoline.

Now remember, the DGR is in less than a week and at this point I'm convinced that I need to source a new set of petcocks and HOW AM I GOING TO DO THAT IN TIME, HUH? You don't just go to the corner bike store and pick up a new-old-stock set of discontinued petcocks for a damn near 40-year-old bike. Nor do you hit up the graybeards in the Triples Owners Group if you need something in less than, say, three weeks. I'll admit, I panicked a little at this point. How long had the petcocks been leaking? Had I been running The Dreaded Gasoil? Had I been running it long enough to damage the engine? WHERE WAS I GOING TO GET NEW PETCOCKS BEFORE THE DGR? After a short panic attack, I settled down to solve this problem the best way I know how: with beer, wrenches, and rock 'n' roll music.

READ MORE: How to Change Your Motorcycle Oil

First order of business was to pull the tank. If the petcocks were bad, I needed to know for sure and the best way to test them is with the tank off the bike. Pulling the tank involves removing the vacuum and fuel lines from the petcocks, undoing a bolt at the narrow end of the tank, and pulling it off. With the tank removed, I propped it up on some crates and splashed a little lawn mower gas in there to see if the petcocks would leak. Guess what! Surprise! They...

Didn't? Yeah, no leaks. Set to the Run setting, the petcocks held up and didn't leak a drop. Set to the Prime setting they let the fuel flow just like they were supposed to. The... Prime setti... DAMMIT! I must have left them set to prime at some point and forgotten to set them back to run. Well that explains it.

To say that I was relieved is a massive understatement. The Dreaded Gasoil situation was due to my bumbling rather than any mechanical failure, and I could live with that. I still needed an oil change though, and I needed it tout suite. That week was shaping up to be super busy with my work here at RA and some assorted nerd deadlines I had, and I didn't know how I was going to make time to get oil and change it before the DGR. Then it hit me: the Motul stuff! I had everything I needed right there in the garage! I found a new oil filter in the big box of filters I have on the shelf – I used to flip bikes for beer money, so I have a lot of miscellaneous consumables lying around – and got right to work.

I spent the next hour draining fluids, replacing filters, and generally enjoying myself as I wrenched on the bike. I was a little worried about the synthetic oil Motul sent me. I've always been a dead dinosaur man myself, and figured that synthetics just weren't for me with my stable of antiques. I poured it in anyway because Motul assured me it would be fine and, hey, free oil! Changing my middle and rear drive oil went off without a hitch, and soon I had the bike buttoned, reassembled, and ready to go.

Topping up the crankcase

By this point I was pretty fired up about working on the bike and was happy with my progress. I'd also spent a good hour in close proximity with all the grime, gunk, and grit covering the bottom of the bike and the front of the engine where I have a little oil leak. Usually, I'm not the kind of guy who washes bikes. My motto has always been: "If you have time to clean you have time to ride".

Also, that's what rain's for. Seeing all that slaz on the bike got me down, though, and then I remembered the bike wash Motul had sent with the oil. Remember the bike wash I mentioned earlier? That stuff was gold, man. With the degreaser and other detergents in it, the bike wash cut clean through all the caked on grime and oil. It's simple to use, too. All you need to do is spray it on, wait a minute or two, then hose it off. Oh, sure, you can give it a scrub while it's on there – the instructions actually tell you to do so – but ain't nobody got time for that. Twenty minutes later the old triple was as clean as it'd been since the year of our lord 2000. Thanks again, Motul!

So, how was the oil? Pretty great, actually! The 5100 4T 10W-40 synthetic motor oil quieted down some top-end rattles I had and kept the bike running smooth and strong. It also seemed to fix a persistent issue I had with the transmission where first gear wouldn't engage when the bike was cold unless I revved it above 1,500 rpm. The Gear Box 80W90 gear oil quieted down the middle and rear drives and really smoothed out the power delivery to the rear wheel. During the 30-odd miles, blistering 90-plus degree heat, and grueling stop-and-go traffic of the Distinguished Gentleman's Ride, the new fluids kept everything cool and lubed up and I never once worried about the engine or drivetrain.

Would I recommend Motul fluids to my friends or to you, faithful readers? Yeah, absolutely. The synthetic motor oil seems to be doing a great job in my old Yamaha, and the guys at the company did a bang-up job finding just the right oil for my bike. I'd even recommend the bike wash if you're into that sort of thing.