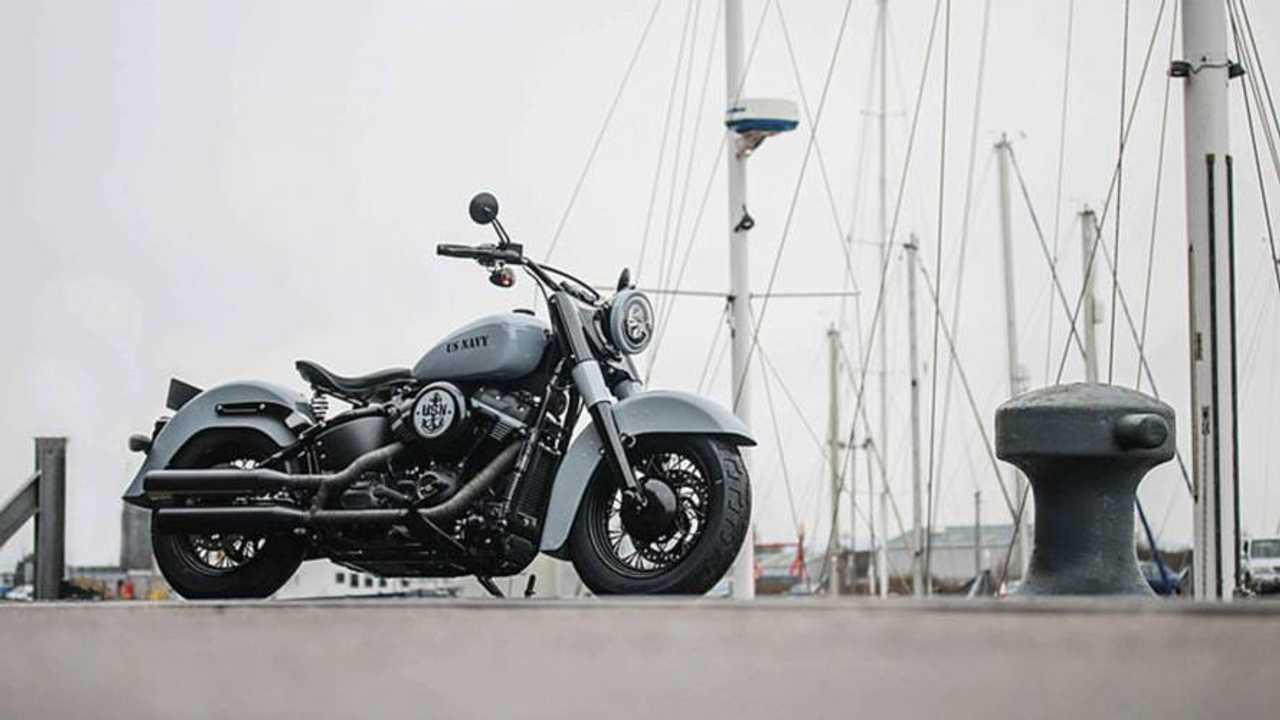 Harley-Davidson's Battle of the Kings build-off is well underway. Today we take a look at the contests UK finalists, including a rad Navy bike from Scotland

ONCE MORE: Harley-Davidson Kicks Off Battle of the Kings 2018

This Sportster-based build is the brainchild of Syc Kustoms, a custom shop based out of Sycamore Harley-Davidson in Uppingham, England. Envisioned by service advisor Todd Meynell, the Alley Rat was designed to harken back to the bad old days of AMF's stewardship of the Motor Company, and the early days of post-AMF freedom. It's a stripped down, grimy, fat-tired urban brawler with some extremely cool retro paint by AP Customs. Per the rules, the majority of the custom parts in this build are straight out of Harley's parts catalog, but there are numerous parts, like the turn signals, that were sourced elsewhere. Not all the parts were picked out of a book though. The tank, rear fender, and exhaust were custom fabbed by an outfit called Chassis Craft.

Of all the entries on the finalists list, this one is my fave. It has great lines, the proportions are just right, I love fat front tires, and that 80s paint job gets me right in the nostalgia. Also, I'm a sucker for Sportsters, so I'm a little biased.

A vision in grey and green.

This bike? I love it. It pushes all my buttons. A++, would ride the wheels off of.

INTO THE BREACH: 'Beach Bobber' Wins Harley's UK/Ireland Battle of the Kings

Would. All day long.

Built by Guildford Harley-Davidson from the delightfully-named Peasmarsh, England, the Petrali Racer is another dirt/flat track inspired machine. It's an homage legendary Harley racer Smokin' Joe Petrali who won 49 AMA national championships in the 20s and 30s. While it includes the requisite H-D catalog parts, a whole lot of this build includes parts sourced elsewhere and a surprising number of custom fabbed pieces. It's a great mix of old and new, with a killer Art Deco paint job sprayed by Image Design Custom.

Man, I'm a sucker for builds like this. Knobby tires, number plates, gaiters, sprung seat? Yes, please. A build like this tells me more about a builder and their sensibilities than any number of parts catalog specials.

Where the Petrali racer is an homage to a famous race rider, Maidstone Harley-Davidson's Ottaway reaches even deeper into Harley's history for its inspiration. Built to recall the dirt and flat track bikes of yesteryear, this build is named for William Ottaway, one of the first engineers hired by Harley-Davidson specifically to tune the company's racing engines. An equal mix of official H-D and high-quality aftermarket parts, the Softail-based Ottaway is a respectable mix of old-school cool and modern technology.

I'm kinda lukewarm on this build. It's technically good, as in it's well executed and it does exactly what the builders intended it to do, but it feels a little, I don't know, sterile. It's probably a blast to ride, but it's kind of boring to look at. Definitely less than the sum of its parts.

Just off the boat from West Coast Harley-Davidson in Glasgow, Scotland, Enlisted is an homage to the Lend-Lease Harleys that helped the allies beat Ze Chermans in WWII. Clearly built by MilHist nerds with an eye for detail, Enlisted is full of cool details. Check out the faux hinge on the rear fender, the the blacked out chrome, the soothing haze gray paint job by Gus of Muddy Beach Customs, and the big old front end off a Softail Heritage. They even fabricated a tank-mounted jockey shifter to round out the old school aesthetic.

Okay, two questions here. A: Why is this Scottish bike not painted up in tartan (I'll take MacLeod, thankyouverymuch. Go Wooster Fightin' Scots!)? B: Why is this Scottish bike an homage to the United States Navy when the UK has a perfectly good and highly respected navy of its own? Other than those two beefs, I like this bike. I like the color, I like the theme, I like the bonkers jockey shift the guys at West Coast fabricated, and I like the shout out to the Navy. The fouled anchor and U.S.N. on the air cleaner cover is a bit much, the LED headlight is totally wrong for this build,  and the exhaust isn't what I'd call period correct, but overall this bike is pretty great.

So, yeah. That's a pretty good showing from the UK this year. If you want to see the bikes that didn't make the cut, check out the BotK UK website. If you like custom Harleys, stay tuned for more Battle of the Kings news.