I had been obsessing over Harley-Davidson’s Dyna and FXR platforms for a few years, watching as a niche became a craze, then a craze turned into a lifestyle. Ten-inch T-bars, soft saddlebags, T-Sport fairing, tall suspension, geometrical-patterned sparkle paint. I was entranced. And the wheelies these guys were doing? Ludicrous. So, I over indulged in Instagram tags and followed a few of the guys that were sort of at the forefront of this whole thing—@harleywheelies, @unknownindustries, etc. The last Harley I had a leg over was an Ultra Gilde, and before then a friend’s 883, but never a Dyna, and certainly nothing that performed as these machines appear to.

CHECK OUT: Perpetual Motion: How I Came Around to Harley-Davidson

Then came the new stuff. As you’re likely aware, Harley did away with the Dyna platform for 2018. This controversial decision caused much ballyhooing on their own channels, and countered with a great deal of skepticism, angst and general disdain from fans of Milwaukee’s finest. I, however, was excited. These new Softail bikes were a step—albeit decades delayed—in the right direction. With a mono-shock rear, upgraded front suspension components, and H-D’s new 107 c.i. Milwaukee Eight mill, the new Softail models—which took styling and aesthetic cues directly from the outgoing Dyna line—were more my speed. Of all the iterations unveiled, two stood out to me—the newly styled Fat Bob and the more traditionally clad Lowrider. So, I asked for one of each. You know, for research (winky winky).

But what’s this all about? You’ve probably already read reviews of these new bikes, heard the hate-storm on the Internets, or frankly don’t care.

"You compare Harleys to other Harleys... Older Harleys. Not to anything else,” said my old friend and editor Mark Tuttle once upon a time.

So, with that remark ringing in my ear, I decided to investigate not what these new bikes are all about, but instead where they came from. Where the Harley Wheelie craze was born or, more importantly, how the terms ‘Harley’ and ‘Performance’ can go together without using the word ‘Buell.’ 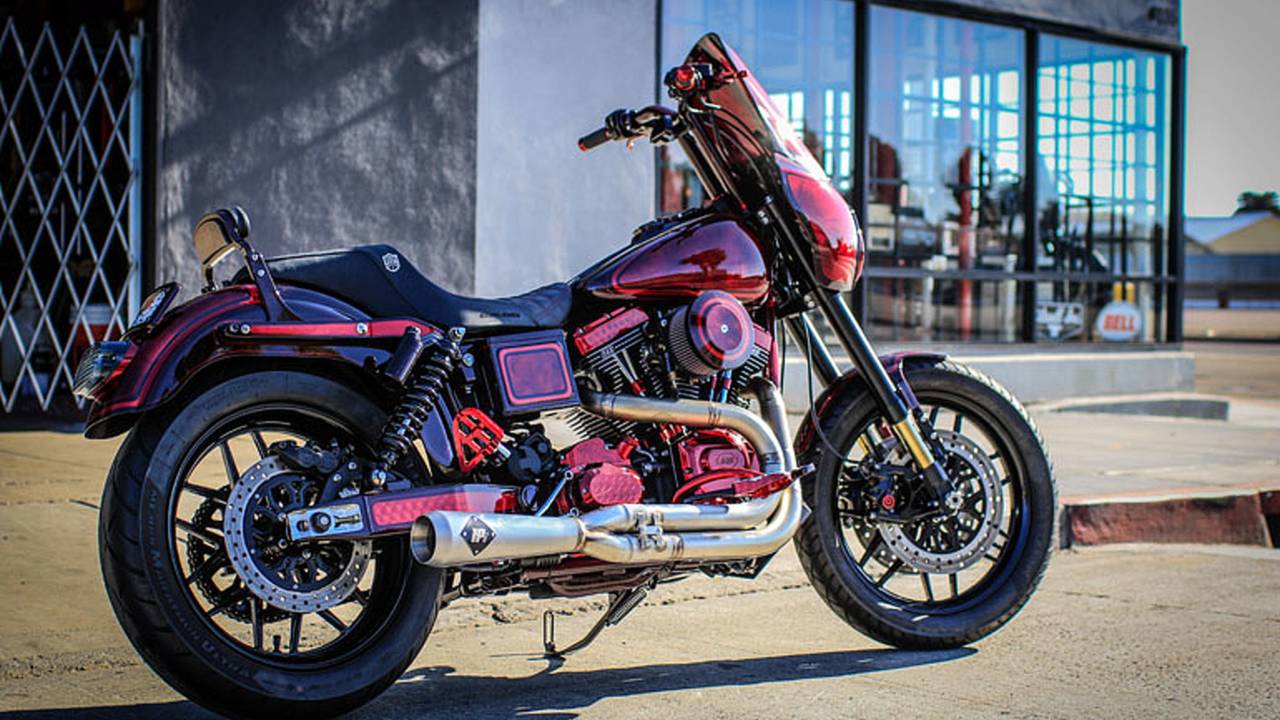 My first stop for this experiment was Prescott, Arizona, where an old friend, photographer, and general bad ass by the name of Bruce Dorn resides. I’d heard rumor of his H-D for a few years—An old FXR he bought new in 1988, upgraded with a bunch of top of the line go-fast, stop-suddenly type stuff, then sold a few years later only to regret the decision for decades. In 2016 however, he found his former motorbike sitting in a garage on the Jersey Shore, unmolested and hardly ridden. So he bought it back and rekindled the relationship.

“When I found her again, it was like running into an old girlfriend you never should have broken up with, who hadn’t aged a day and somehow still found you attractive.” 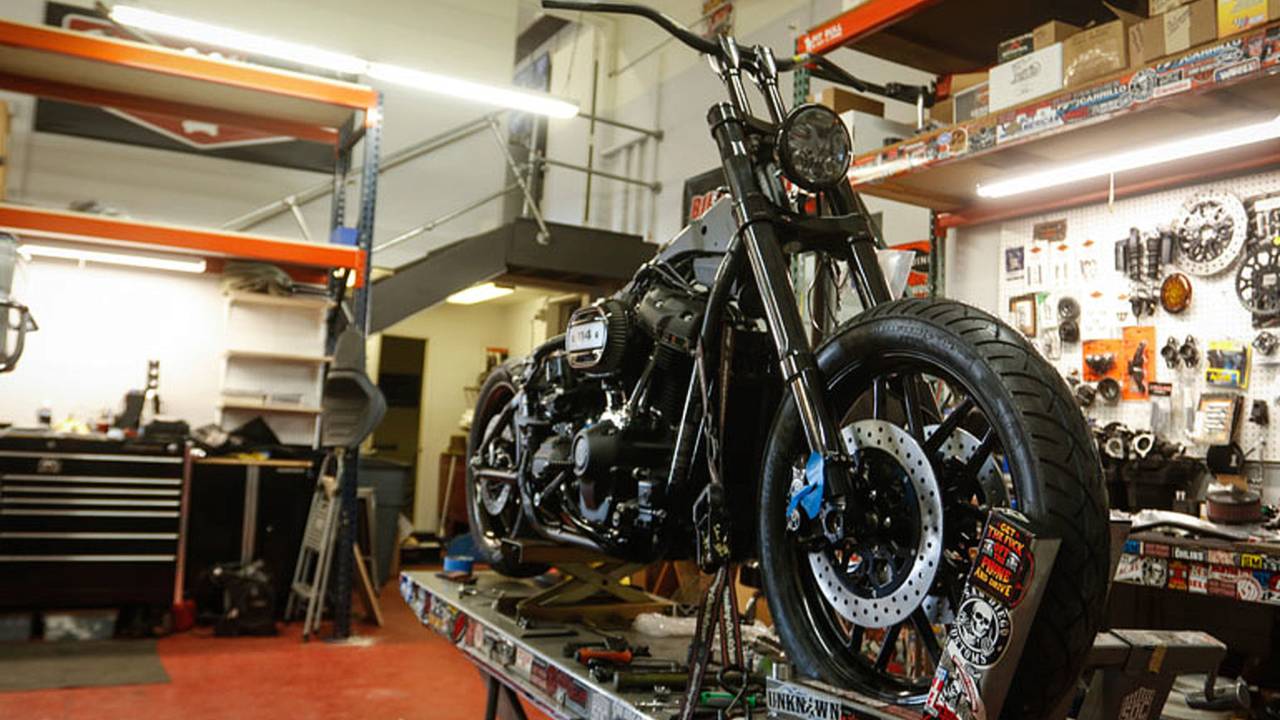 To be more precise, Bruce’s bike is an FXLR with 24k miles on the motor, Ceriani front forks, two into one Supertrapp exhaust, WP 14.5" rear shocks, 4" bar risers, a heritage headlight, and a ton of other modifications. What’s the significance of Bruce’s FXR? According to my old friend, this bike and the changes he made to it 30 years ago were the beginning of what I had been obsessing over—Club Style. He built the bike to go fast and corner well, something Harleys, especially at the time, were not known for. Ask any H-D enthusiast about the FXR models though, and they’ll be quick to tell you that these—the last of the hand-welded frames from the factory—are the best handling and most performance-oriented H-Ds ever made. And so, for the sake of science, I had to ride Bruce’s bike. Shoot.

Wait, how did we get from there to here? Bruce’s bike is a testament to something I think is important when considering Harley Davidson culture. Those that choose a Harley over another OEM see potential in the platform, the same way they might see potential in our country and our ideals. A land of opportunity. Yours to do with what you want. Not satisfied with what's given to you. Not settling. Ask an owner why they chose their Harley, and a lot of times you’ll hear something similar to this, " What's more American than that?" This was the response I got from my friend Mikey, co-owner of a shop specializing in performance Dyna products and bike builds called San Diego Customs. 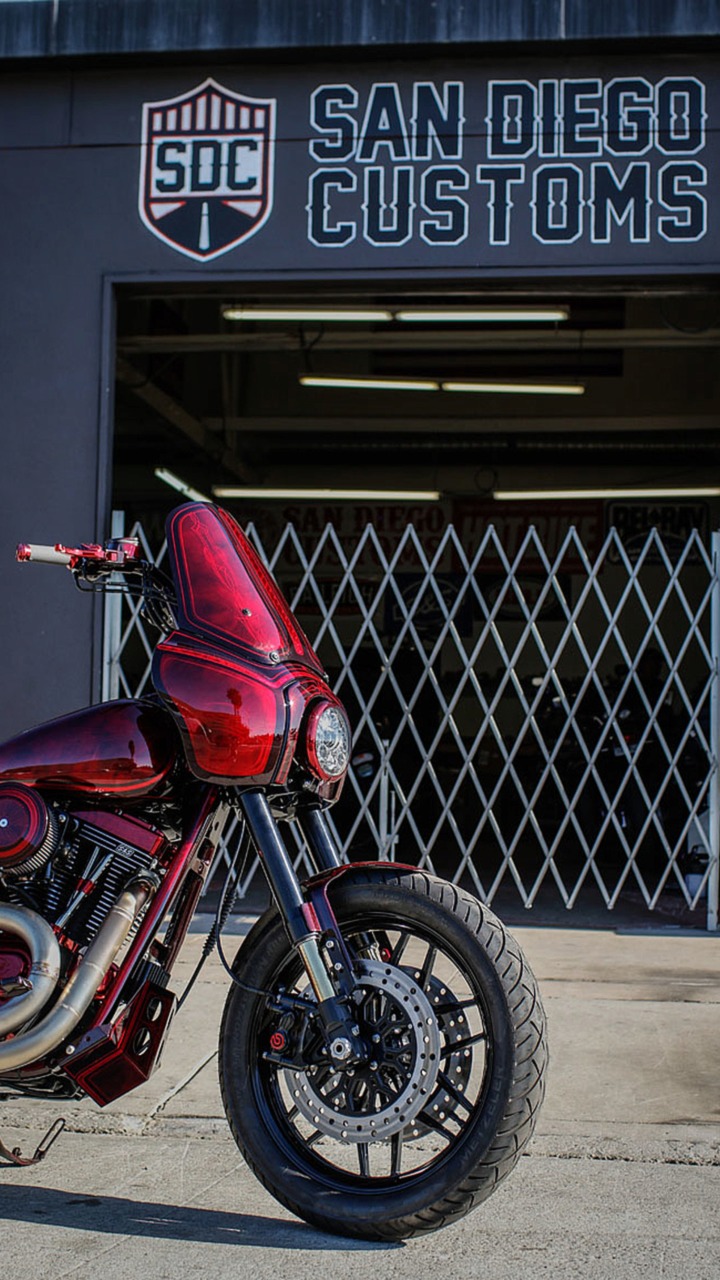 "You're not just buying a motorcycle, you're buying into the brand, into the lifestyle. You're a part of something greater than yourself," he told me.

I dug a little deeper and learned that Mikey had come to this country from South Africa in his early 20s with nothing more than a backpack, skateboard, and a few hundred dollars. His skateboarding background and his love of doing things you shouldn’t with something you’re not supposed to set the stage for his love of performance Dynas. When I asked him about the new Sottail models, he was both candid and concerned.

"It's a night-and-day difference, these new bikes are nothing like the Dynas they replaced. They screwed up, though, they should have called it the ‘Monoshock Lowrider,’ people would have been alright with that."

Another thing I took note of when researching Dyna and FXR enthusiasm was the number of skateboarders and motocross athletes, as well as their influence on this sub-culture. A friend had suggested nearly all pop culture themes present in the last thirty years have come courtesy of skate culture, and that a trickle down effect occurs over time, leading industries and segments which have nothing to do with skateboards or skaters to adopt themes present in that industry. While I’m not entirely in agreement, I do see how the skate culture has impacted motorcycling, especially recently, and most prominently in the Harley-Davidson space. You need look no further than some of their latest ad campaigns—the launch of the Street Rod, as an example—or brand influencers. 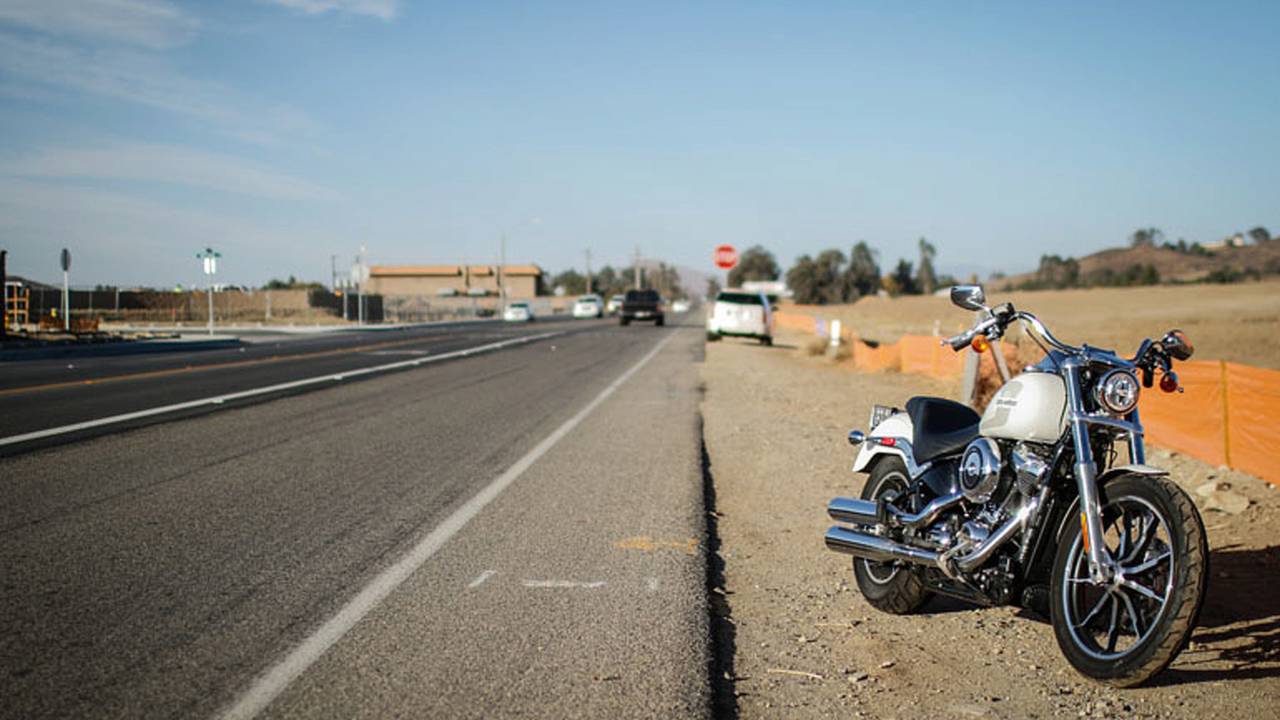 Why Harley though? My thoughts go back to Mikey and the mindset of so many non-traditional, er, extreme sport athletes who enjoy the juxtaposition of doing something different on something so common. Take Robbie Maddison and his dirt bike surfing endeavor as an example. The thing is, the irony is lost at some point, especially when your sub-culture becomes common place or the tricks and skills you worked so hard to perfect and acquire are now the norm. I think this is thanks in part to Instagram and our constantly connected, seen-it-all society. So, will an obscure, socially unacceptable activity such as drifting your Dyna and doing huge wheelies down the interstate on your FXR become the next Biker Boyz b-movie? Your call. What I can tell you is, what was once abstract is now an algorithm.

Now, I can’t close this up without talking about the new bikes, in particular the Fat Bob and Lowrider which were graciously loaned to me, the latter of which I crashed (a story for another time). Again, you’ve likely read the reviews or simply don’t care. However, I will tell you this—seeing them unveiled, I was excited. Sitting on one I was stoked, riding the thing, I was intrigued, and when they took it away I was sad. The Fat Bob’s styling caused quite a stir and certainly isn’t for everyone, while the Lowrider looks nearly identical to the one it replaced sans the twin rear shocks. Both bikes performed noticeably better than I had anticipated and left me penciling out a list of things I would do to them if either one was mine to keep. 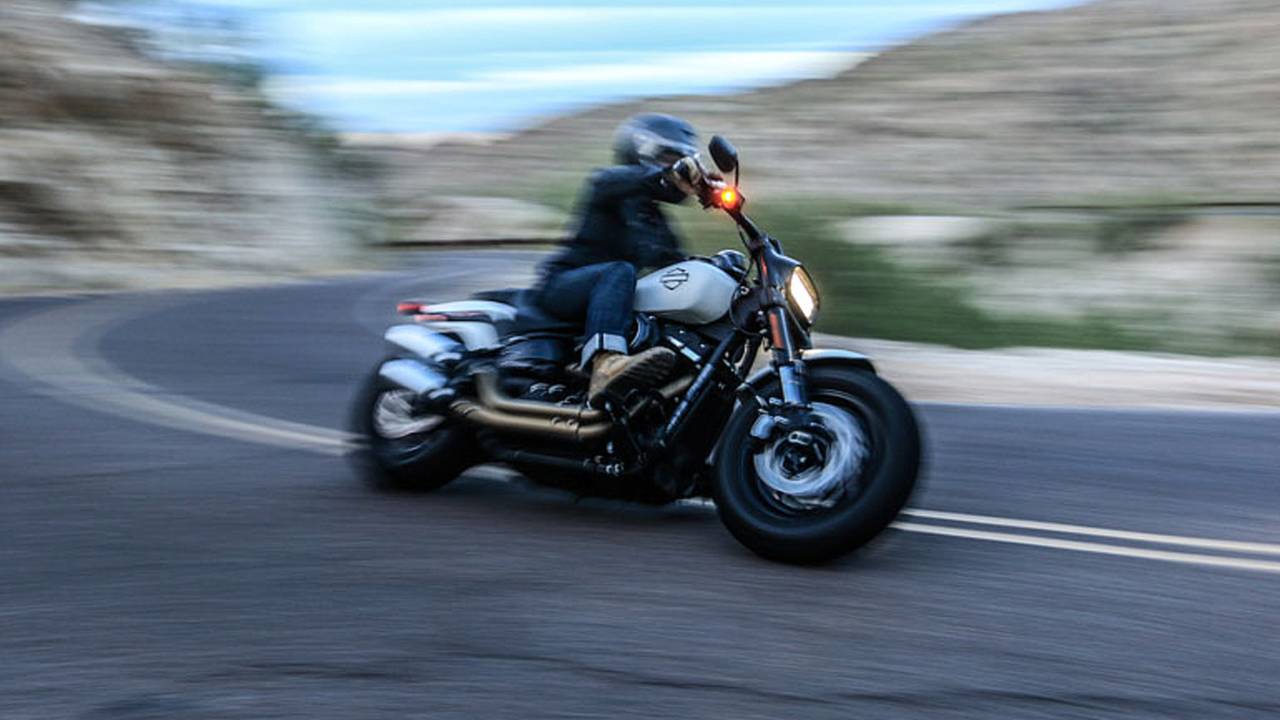 That seems sort of strange and counter intuitive, no? To want a thing so much yet create a list of mods and accessories to make said thing “better.” Better is relative though, and those changes would make the thing mine. Here again is this idea of identity, ownership, snowflake-ness in a time of too much. The Dyna, like the FXR before it, is a blank canvas, a sixteen-foot tall pitch of marble ready to be chiseled, struck and carved. To be made into a thing that is your own, however you see fit. And like any piece of art, its acceptance is subjective. Me? I dig this thing, this loud, smoke-filled, sideways drifting Dyna thing. Wheelies across the Golden Gate Bridge. Motors measured in cubic inches, not centimeters. Call me archaic, call them old-school, call it what you will. Until you’ve thrown a leg over a thing and pulled it wide open, until you’ve had one so you can compare it to another, you don’t know a damn thing. And like my dear friend and legendary adventure motorcyclist, Austin Vince, once said, “you shouldn’t listen to anyone that hasn’t done exactly what you are planning to do.”

By: Justin W Coffey
++
Got a tip for us? Email: tips@rideapart.com