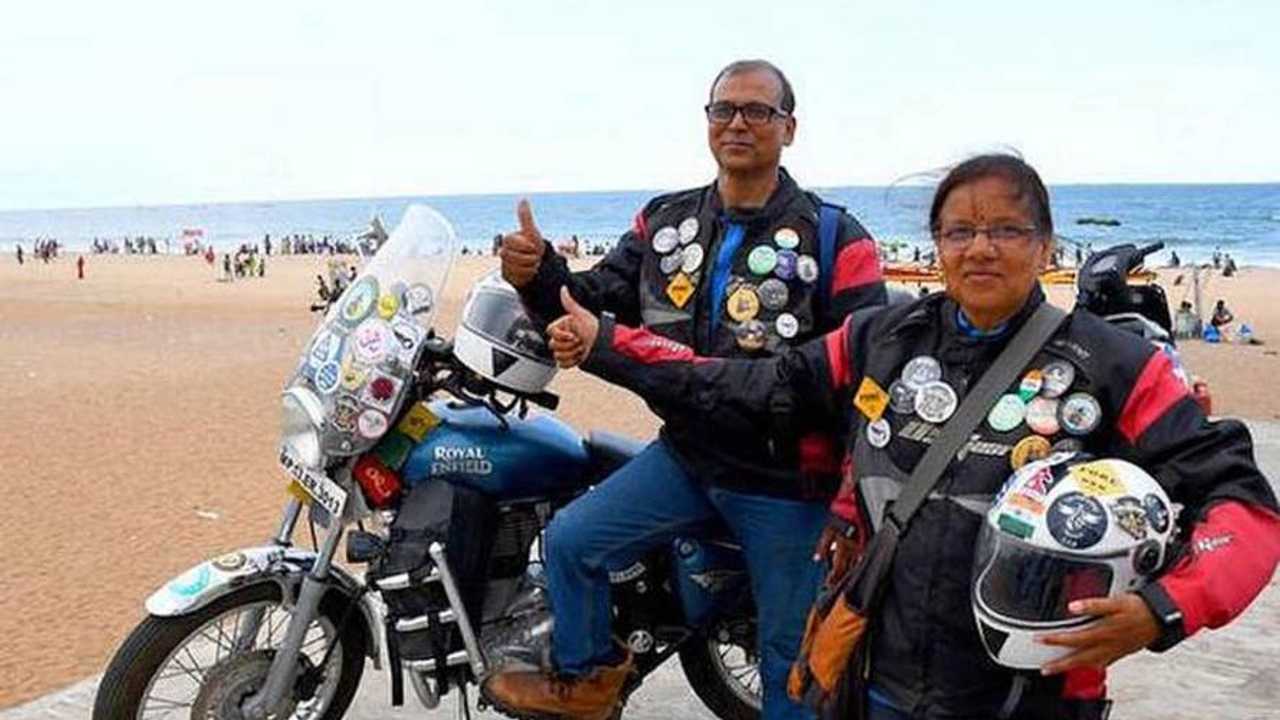 “Age may have an effect on the body, but not on the mind, and it is the mind that challenges the body to keep moving on.”

Those are the words of one mister Dilip Chauhan. Mr. Chauhan is 61, and to him and his 58-year-old wife Pooja, age ain't nothin' but a number. The retired couple is living this philosophy, and just embarked on a multi-thousand mile, 150-day tour around India and several neighboring nations on their trusty Royal Enfield.

Despite a fifteen-year hiatus from riding, the retired bank manager felt the desire to take on a long distance motorcycle tour so, in September of 2017, he and his wife took off on the journey. Having already covered almost 7,000 miles thus far, I’d say the trip is off to a good start. That said, like the majority of long-distance trips, some problems have come up for the travelers.

Roughly a month into the trip, they were involved in a collision that was severe enough to leave Dilip with a broken clavicle while Pooja walked away with a hairline fractured rib—injuries that would require a cool four months of recovery. Once healed, the couple—who are no stranger to traveling—set out once again, undeterred by the crash.

“It was my wife who took the lead and said that we had to finish the journey of our dreams,” says Dilip.

Aside from long hours in the saddle (and the crash), the trip had been mostly smooth sailing, primarily traveling from city to city on well-maintained roads in a temperate climate. Once hitting the treacherous and hilly roads of Nepal and Bhutan, and stretches like the Nathula and Khardungla Passes, things became markedly more taxing.

“Rain, snow, sub-zero temperatures with bone-jarring wind chill, hairpin bend roads – you name it, and the Himalayas threw it at us with a vengeance. The ride along the Himalayan belts was an adventure itself. But in the entire journey while we moved along, we also travelled inwards and understood our inner strength,” says Dilip.

The journey also enabled the couple to gain a deeper appreciation for the various cultures, religions, and traditions found in and around India.

“We celebrated Dasera with a wonderful hospitality of a Muslim family in Srinagar and Diwali with friendly a Nepali family in Dharamshala. These experiences reinforce our faith in humanity and are so contrasting to the pre-conceived ideas we share about regions and communities. Travelling through the roads gives you this unique liberty of experience that nothing else does!” Pooja explains.

Their travels have also introduced them to a large number of motorcycle enthusiasts. By using various social media platforms, the Chauhans have met up with numerous different clubs, learning about good local rides and sharing touring tips and stories.

“We are keeping a travel log book of our journey to inspire other bikers and tell them that age should be no constraint in hitting the road," said the Chauhans.

The Chauhans still have a lot of miles ahead of them before their trip comes to an end, but the two plan on hitting every district in the entire country. What keeps the mind going?

"The realization that you live only once, being unafraid of uncertainties, and a desire to explore the diversity of the universe,” say the couple.

Photos and source: The Hindu