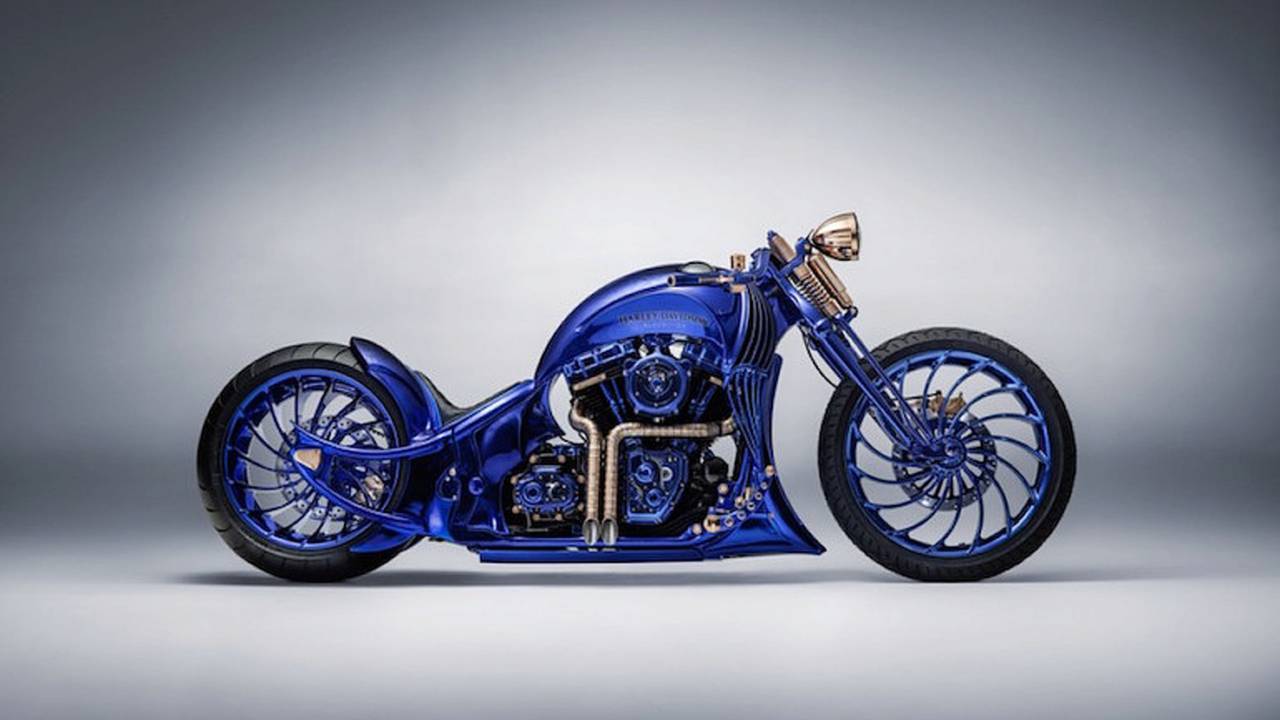 A liberal dose of precious jewels and gems, gold-plating, silver-plating, plus 2,500 man-hours add up to one very special one-of-a-kind Softail Slim S.

Harley-Davidson teams up with Swiss watch and jewellery company Bucherer to deliver a diamond encrusted bike worth nearly $2,000,000

Don't you love it when non-bike brands get in on the custom bike craze? Some projects are far tamer than others, and some are just objectively ridiculous, which is how we would classify the Harley-Davidson Blue Edition from high-end Swiss watch and jewelry purveyor, Bucherer, as part of the company’s Blue Editions watch collection.

The Harley Blue Edition began its life as a Softail Slim S, before the cruiser was transformed through over 2,500 hours of labor. The project took a year to design and produce and was a collaborative effort between eight members made up of the watchmakers of Carl F. Bucherer, the jewellers of Bucherer Fine Jewellery and and the motorcycle specialists of Bundnerbike.

The headlight is another custom piece of the very expensive puzzle

The Softail was stripped down and new retro-style bodywork was drawn up and fabricated, giving the Harley something of a vintage bobber/chopper hardtail theme. According to the Bucherer press release, “Every metal element found on this one-of-a-kind motorcycle has been produced, welded, beaten, ground, and polished by hand”. A new stance was desired so a one-off hardtail frame was created, as were a set of extra wide wheels.

A window in the camshaft housing reveals the rotating camshaft, along with the valve control and the throttle valves which have been gold-plated, all of which is illuminated via heat-resistant LED lighting. While the press release fails to specify, it does say various other parts of the bike were also gold-plated. This would appear to include the hand levers, reservoir caps, and foot controls. Going in a different stylistic direction, the seven figure bike’s designers opted to use a cowhide saddle that was sewn by hand in Switzerland.

It appears one of the primary reasons this Softail was dubbed the “Blue Edition”, was because its elaborate and over-the-top paint job. The iridescent coat is achieved by first silver-plating the tank, tail wheels, frame, fenders, forks, handlebars, engine cases, and several other odds and ends. Next, six coats of different colors are layered atop each other, using what the press release refers to as “a secret coating method”.

Most of the aforementioned parts are all a vivid, solid blue, but the tank is adorned in a custom “Harley-Davidson” script sitting above the “BLU/EDITION” logo shared by Bucherer’s other 17 ultra high-end watches in the Blue Edition collection. The top of the gas tanks are decorated with an array of 8’s scattered across the fuel cells, and exponentially multiplying in number and density as the design gets closer to the front-end. Like it or not—and personally I’m of the latter group—it’s an incredibly unique and distinct paint job.

The next phase in the build happens to be the part that adds roughly $1.88-million to the Blue Edition’s “value”. One bespoke section was cutout of the left fuel cell to make room for a small circular case and see-through backlit dome made of armored glass that houses a six-prong Heaven solitaire ring with a 5.40-carat diamond that the jewelry company calls “The Dizzler”.

The bike houses the six-prong Heaven solitaire ring with a 5.40-carat diamond that the jewelry company calls “The Dizzler”

On the right side of the top of the tank is a backlit second armored glass dome, this time housing a special custom-made watch, which is based on Bucherer’s Patravi TravelTec II model. The bespoke watches’ dial is “adorned by elements of a motorcycle engine”, and to make sure the V-Twin’s vibrations don’t damage the expensive timepiece’s internals, the watch’s housing incorporates an elaborate suspension/damper system using silicon rings.

“It was a long road,” Samir Merdanovic, Head of Manufacture Movements at Carl F. Bucherer said of the development process. “The holder, for example, also serves as a watch winder. The watch is therefore wound regularly and continues to run, even if the motorcycle is not ridden for an extended period.”

If perhaps painted a different color, the Blue Edition might look half decent

Another over-the-top liberal use of bling on the Blue Edition is the presence of a couple more Dizzler rotating rings. Unlike the full-size Dizzler in the tank, these rings are slightly smaller—though just as expensive probably—and had to be modified to properly mount pairs to the bike’s bar ends and top of the forks. “That was a technical challenge,” says Jurg Ludwig Jr, Managing Director of Bundnerbike. “To ensure that the rings really stay in place, a special method was applied that guarantees a very strong hold. How this works remains a secret of the Bundnerbike blacksmith,” explains Ludwig.

The left tank's custom-made watch, which is based on Bucherer’s Patravi TravelTec II model

The Blue Edition Softail was unveiled on May 9, 2018 in Zurich where a launch event was held for what is now reportedly the world’s most expensive motorcycle. Only a single example was produced, though that makes sense when you consider it’s priced at a whopping 1.888-million CHF (Swiss Franc), or about $1,887-million USD (at today's exchange rate).