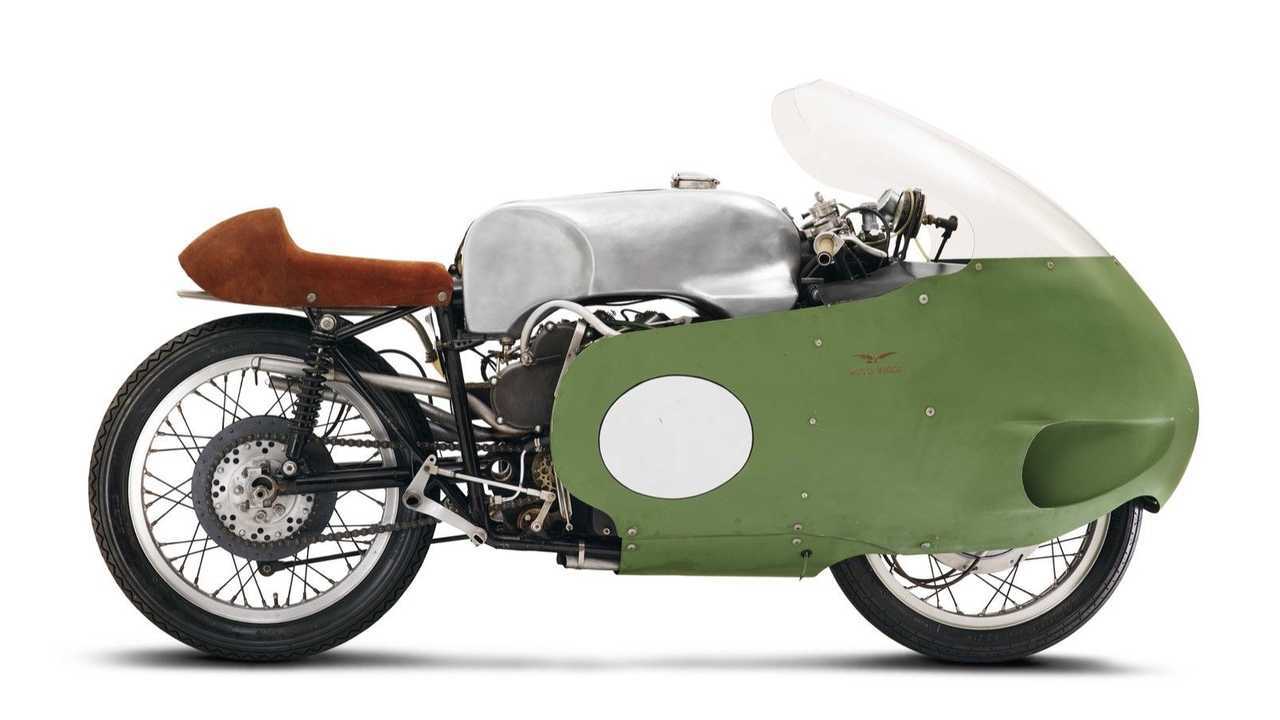 On March, 15, 1921, Carlo Guzzi and Giorgio Parodi established the “Società Anonima Moto Guzzi” for the “manufacture and sale of motorcycles and any other activity related or linked to the metalworking industry". The company later took on the name Moto Guzzi and went on to help shape the history of motorcycling and transportation.

Today, we frequently associate Guzzis with legacy and retro styling. However, the Mandello Del Lario brand was once on the cutting edge of motorcycle development. It developed the first motorcycle center stand, V8 engine, and wind tunnel. From race bikes to police fleets, from Italy to California, Moto Guzzi’s decorated history spans the spectrum of motorcycling. To recognize its 100th anniversary, we’re taking a look back at the models that made Moto Guzzi and changed the course of motorcycling forever.

Though Moto Guzzi is known for its longitudinal V-twin these days, the company’s first engine was a horizontal single. The engine configuration actually dominated the brand’s range for 45 years, and the Normale 500 was the very first example. With a four-stroke, air-cooled 498cc engine at its heart, the Normale spun up a modest 8.5 horsepower. The front girder fork and rigid rear end were typical of the day as was the double-cradle frame.

The three-speed transmission also included a hand shifter. At 286 pounds and a top speed of 53 mph, the Normale was just that, but it paved the way for extraordinary new adventures.

One such adventure was courtesy of Moto Guzzi’s Norge G.T. 500. The platform retained the horizontally-mounted, 500cc engine but upgraded to dual drum brakes and balloon tires. The girder front end remained but received a triple-spring setup derived from the brand’s racing developments. The biggest change was the Norge’s pivoting rear suspension system. Due to the novel concept, many competitors and journalists of the time prematurely wrote off the G.T. 500.

To prove the critics wrong, founder Carlo Guzzi’s brother, Guiseppe Guzzi, set out on a 2,300-mile journey to the Arctic Circle aboard the Norge. Riding through Germany and Denmark, Guzzi arrived safe and sound at Norway’s North Cape. The stunt not only proved the detractors wrong, but also established the Norge G.T. 500’s outstanding reliability.

Still boasting the flat single engine configuration, the Airone 250 marked major advancements for Moto Guzzi in 1939. Thoughout the platform’s lifespan, Guzzi introduced a telescopic fork and large-diameter brakes to improve performance and safety. With a quarter-liter engine at its heart, the Airone was much more accessible but that didn’t stop the brand from creating a Sport version.

A 7.0:1 compression ratio and 25mm Dell’Orto SS carburetor, and thicker valve springs, the Airone Sport achieved 13.5 horsepower. The top speed even rose to 75 mph, a high number for the day.

Lightweight motorcycles and scooters became popular in post-war Europe as the need for cheap and reliable transportation grew, and Moto Guzzi capitalized with its Galleto lineup. The step-through scooter saw numerous variants throughout its history, with capacities ranging from 160cc to 192cc. The original 160cc version included a three-speed transmission with a foot shifter. For the 175cc model, the brand introduced a four-speed gearbox. Finally, the 192cc Galleto received an electric start in 1961.

On the other side of the spectrum, Moto Guzzi’s racing department was also pushing the engineering envelope with its V8 500 GP racer. Affectionately nicknamed the Otto, the V8 engine cranked out 78 horsepower and reached a top speed of 171 mph. The air-cooled, four-stroke, 499cc could also mate to a four, five, or six-gear transmission depending on the race application. While the frequently led races and posted fastest lap times, the unreliable and complex engine never allowed the V8 500 GP to finish at the front.

By 1961, the motorcycle industry slowed down to the point that Moto Guzzi started exploring car manufacturing. Engineer Giulio Cesare Carcano originally designed a 500cc, 90-degree V-twin for Fiat but the Mandello Del Lario factory couldn’t produce the quantity requested by the fabled carmaker. Fortuitously, the Italian Highway Patrol was accepting proposals for its motorcycle fleet at the time as well. The winning entry would go to the motorcycle that incurred the least maintenance costs over a 10,000-km distance.

With Carcano’s bored-out (703cc), longitudinal V-twin paired to a shaft drive, Moto Guzzi easily secured the contract. The proposal also attracted police departments as far as Los Angeles, California. The V7 700 generated a respectable 40 horsepower but was more synonymous with comfort and reliability. The model was the first time the company used a longitudinal V-twin in a production bike and Moto Guzzi is still famous for that engin configuartion today.

Engineer Lino Tonti joined the company in 1967 and set out to perfect the V7 platform. Tonti quickly expanded the range to include the V7 Special, Ambassador, and California. However, his crowning achievement was the V7 Sport.

With experience in Mondial and Gilera’s racing divisions, Tonti knew he could squeeze more performance out of Guzzi’s top seller. He bored out the 90-degree V-twin to 748cc, which resulted in 53 horsepower. The 454-pound dry weight and five-speed transmission also hit new milestones and the V7 Sport easily became the fastest Goose in company history. Until the V7 Sport’s successor hit the scene.

Moto Guzzi jumped into the naked bike craze in 2005 with the Griso. The brand’s old-school take on a classic roadster was much more elevated than the Ducati Monster, but it also lacked the agility and rowdy nature of the segment stalwart. Boasting a 1,064 V-twin, the Griso produced 87 horsepower and 66 lb-ft of torque. With its muscular lines and refined styling, the Goose was a mature alternative and firmly established the brand’s identity through the aughts.

The Eagle Brand’s latest motorcycle, the V85 TT, also capitalizes on the current ADV trend but smartly recasts itself as the first classic enduro. Despite the obvious marketing benefits, we can’t argue with Moto Guzzi’s classification, as we thoroughly enjoyed our time with the V85 TT. Housing an 853cc, transversal V-twin, the retro-styled adventure bike appeals to both novice and experienced off-roaders.

Taking the place of the Stelvio, the V85 TT blends both adventure riding and classic aesthetics, two categories that are red hot at the moment. With the classic enduro leading the charge, we can’t wait to see what Moto Guzzi brings to the table in the next 100 years.

The Goose Is Loose:

2021 Moto Guzzi V9s Get An Engine Upgrade You May Recognize