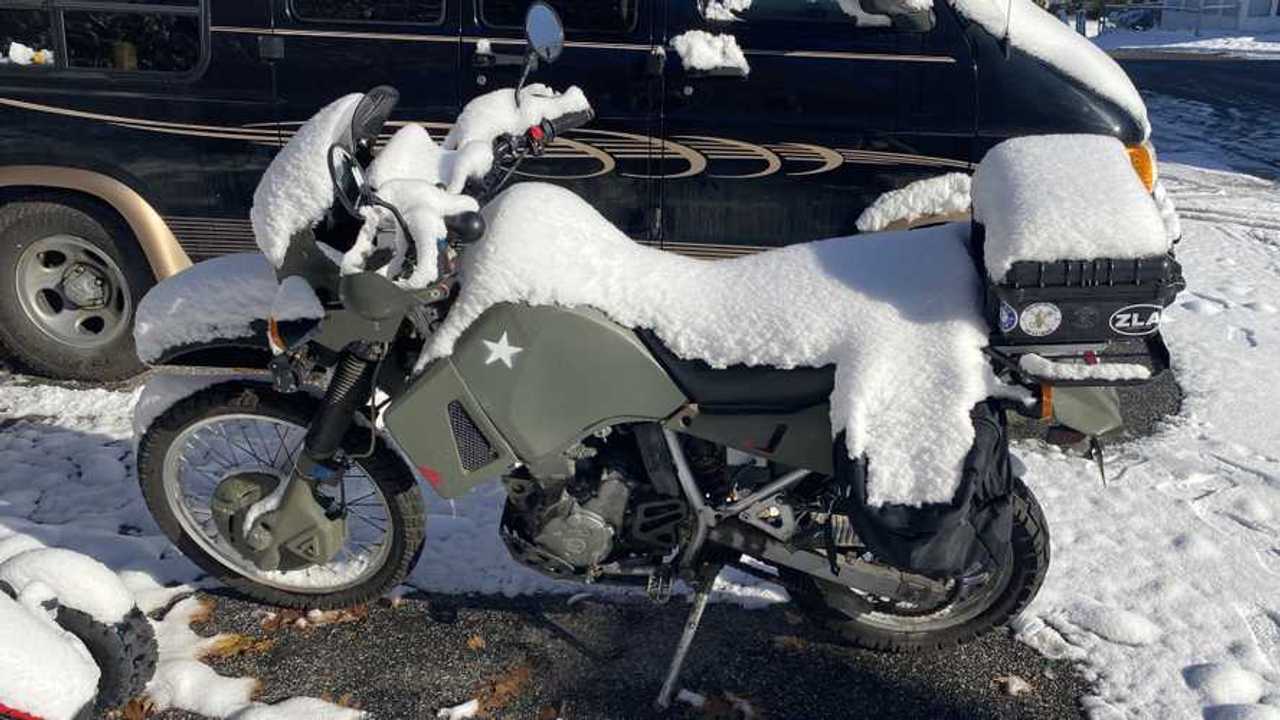 A white Christmas is one thing, but a white Halloween is quite another.

October through November is one of the best times to ride in New England. The weather is cool enough that you're not hot in your riding gear, but it's also not so cold that you have to wear ten layers or run kilowatts worth of heated gear. The tourists are gone, leaving the roads wide open for enjoyable spirited riding. Best of all, the leaves are changing color, filling the scenery with bright colors that you only get this time of year.

It's the end of October. The leaves are only halfway off the trees. Yet on Friday, we got a few inches of snow—far more than the dusting that was predicted. For me, this brings riding season to an early and completely unexpected close. Yes, there are those who ride year-round in any kind of weather. I'm not one of those. Especially after my recent crash on loose sand, I'm extremely wary of riding on such a surface, which now exists because the roads got treated for the early snow.

That's not the only reason, either. There's not only sand on the road but also salt. Salt eats whatever it touches. You need only look at the underside of my camper van for proof. Ninety percent of wrenching on cars in New England is busting the old rusted parts off that have molecularly bonded into one solid lump of iron oxide. I don't want my bike to become like that. I know it will. Our buddy and RideApart alumnus Kate has already had to replace a front caliper after winter salt seized it. On a Kawasaki KLR 650 like mine, I might add. I'll be putting it into my storage unit soon (and not breaking my foot on the way out this time).

I suppose it's not all bad. The market is now ripe for selling snow tires for a car I no longer own. It's not two feet of snow on Halloween like we got in 2011. My girlfriend thinks it's pretty. All I can see is six months of no motorcycles because that's how long the snow flies in New England.

Ironically, as I'm writing this, I'm watching the remaining leaves fall off the trees and land on top of the fresh snow. Winter is here, and fall isn't over yet, either. It's even more proof that time has no meaning in 2020. The days were already blurring from one into the other. Now the seasons are, too.

Ask RideApart: How Do I Store My Bike For Winter?
++