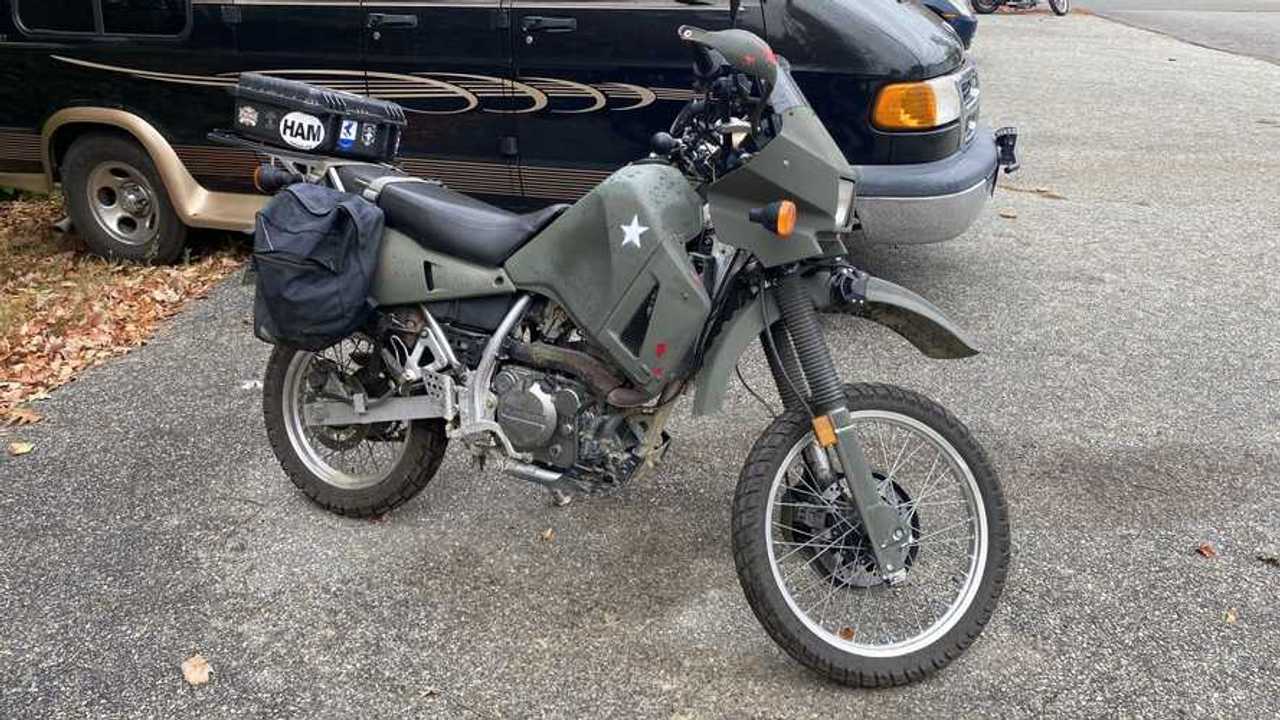 The New England Riders Vermont Foliage Dirt Ride is one of the highlights of the year for me. It's a day trip meandering through beautiful scenery at the most colorful time of year, and 80 percent of the ride is on dirt roads. I was having a wonderful time until we approached a stop sign on a sand-covered paved road. I misjudged the road surface and applied too much front brake, locking the front wheel. I went down hard at about 25 mph.

A Tale of ATGATT

Even while my bike and I were still sliding down the road, I swore to myself because the bike had fallen on top of my right foot, which I just had surgery on in April. I hoped the crash wouldn't undo all that work, even while events were still unfolding. I also realized that my head-to-toe riding gear was doing its job, preventing any additional pain from road rash. It's amazing how much you can think when you're in the middle of a crash. It's not like you have anything else to do, being out of control and all.

When I finally came to a stop, I reached over and flicked the engine kill switch. They don't like to run when they're tipped over on their side. I was in the middle of a group of seven riders and I could hear the people behind me honking their horns at the people in front, unaware of the events. I extracted my foot from under the bike, thankful that I'd worn my motocross boots instead of my touring boots despite knowing the route didn't include any difficult dirt. Ironically it was the pavement that got me instead.

My Rev'It jacket and HWK pants show little sign of sliding sideways down the road.

By now the others had gotten off their bikes and gathered around me. I felt a bit lightheaded as my body began going into shock from smacking the pavement. I knew not to leap to my feet, in part because I didn't know if I'd rebroken my foot. I drank some water since I was suddenly very thirsty. The others picked up my bike and parked it.

I was lying in the middle of the road, which isn't the safest place to be. Someone found a porch chair from somewhere and two of the guys helped me into it. That's when I got particularly faint. The next thing I knew everyone was staring at me. Apparently, I'd passed out for 30 seconds. That's when the decision was made to call 911. I didn't argue. The ride leader assured me that he would take care of getting my bike to his place where I could pick it up later, so that was one less thing for me to worry about.

My ambulance wasn't nearly this cool.

A nearby EMT was the first to arrive on his own, before the ambulance. He checked me out and got my info. A fire truck arrived soon after, not that there was any fire, but a fire truck and ambulance usually go hand-in-hand. They left once the ambulance showed up. EMS checked me over again, more thoroughly this time. They asked me questions to determine how coherent I was, such as what day of the week it is and who's the President. They moved me onto a stretcher and rolled me into the ambulance—my first ride ever.

Since I was coherent, I unlatched my right boot so they could remove it and check out my foot. It was swollen but there was no more obvious damage than that. One of the crew set up a splint for it, while another hooked up the blood pressure and oxygen saturation monitors. Everyone was asking me questions about what hurt, where, how much, what kind of pain, and so on. Besides the foot, my palms and wrists hurt, since I had instinctively tried to catch my fall despite the gesture being useless under the circumstances. My head didn't hurt, and a lack of scratches on my helmet indicated that I did not hit it when I crashed.

A Vermont state trooper came into the ambulance. He just wanted to get my info and a brief description of the crash. I'd broken no laws and caused no damage to anything but my bike and me, so it was merely a formality. My riding group, who had stayed with me the entire time, had already given him most of the information he needed. He did want to see my insurance card, which was on the bike, and I was in no position to walk over and get it. I gave him permission to go into my luggage and find it. Normally I'm not a fan of letting a cop go through my stuff, but this was a reasonable exception, and the other riders helped him.

We took a slow, gentle ride to the hospital. There were no flashing lights or sirens because my condition was not severe. Once at the hospital, though, I was rushed straight into the trauma room. Apparently the words "motorcycle crash" make you a top priority. They picked me up and moved me from the stretcher to a bed, hooked up their own monitoring equipment, and asked me tons of questions all over again. Fortunately, they did not cut my clothes off, realizing that gear is expensive. It turned out that my nurse was a Harley rider. She understood exactly what happened and translated it for the others so I didn't have to.

The rest of the experience was much like any other emergency room visit. I got a bunch of x-rays on my foot and both hands and wrists. The exciting news was that nothing was broken and my heel repair from April was still intact. I am convinced that without my motocross boots, I would have broken a bone and/or reinjured my heel.

This Oneal Rider boot saved my foot from reinjury and further broken bones.

As with the ambulance, once the emergency room staff determined that I was not an emergency after all, things slowed down to a more leisurely pace. The biggest delay was only caused by the fact that my girlfriend had to drive two hours to come to pick me up. One of my friends on the ride kept in close touch by text message to get updates. Everyone on the ride was concerned for me. Another friend sent me a picture of my bike packed up in the ride leader's truck, safe and sound, to ease my mind. The standard rule of "don't touch someone's bike without permission" goes out the window in a situation like this, and I was happy about that.

While my foot wasn't broken, it was still crushed in the fall, so I wasn't walking out of there. They gave me a pair of crutches, which I'm all too familiar with using from earlier this year. Fortunately, I'd only be on them a matter of days, not weeks or months like before. Later in the week I borrowed a trailer and drove back to Vermont to pick up my bike. The front end is a little out of alignment but that's just a simple adjustment to fix. It's a KLR 650. You could hit it with a meteor and probably still ride it afterward. In fact, the bike fared better than I did in the crash.

Yet, I still got off particularly easy for what I'd been through. I had two things going for me: good gear and good people who took excellent care of me. That includes everyone from the group I was riding with, to the EMS crew, to the hospital staff, to everyone involved with the ride who brought my bike to a safe place. After this experience, I can't stress enough the importance of good gear. When I inspected it afterward, I couldn't even find any signs of abrasion. When I reviewed the Rev'It Prometheus jacket last year, I never thought I'd put it to this kind of test, but it passed with flying colors.

So, that's what it's like to crash? In 20 years of riding, this was my first significant one, not including parking lot tip-overs and dropping my KLR on trails. I'll be glad to wait another 20 years for the next one, or preferably longer. The worst part, for me, was not knowing what was going to happen. Now I know and knowing is half the battle.