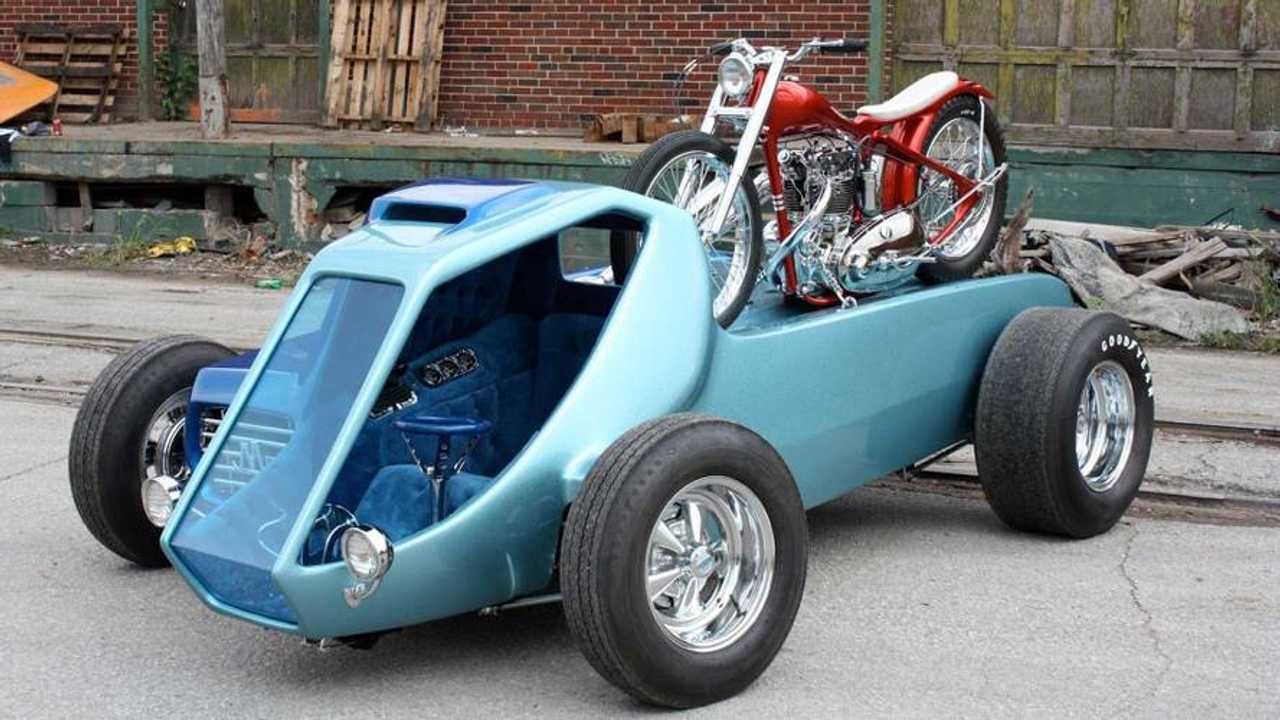 Ed "Big Daddy" Roth was one of the pillars of California's mid-century car culture. Along with other luminaries like Von Dutch and the Barris Brothers (George and Sam), Big Daddy helped guide the development, the look, and the feel of 50s and 60s hot rod culture through art and music. While mostly known as a cartoonist and illustrator—he was the father of Rat Fink and other related grotesques, after all—Roth was also a prolific custom car designer.

Throughout the 50s and 60s, Roth created iconic hotrods like the twin-engined Mysterion, the Beatnik Bandit, the Orbitron, and the outlaw. He also created a ton of lesser-known hotrods that were every bit as radical as those more famous cars. One of these, the Mega Cycle, is our Cycleweird Short for today.

According to the sources I was able to dig up, Mega Cycle started out in the mid-60s as a project imagining what a 21st century El Camino would look like. Original concept sketches were drawn up by a guy named Ed Newton, and the car was originally designed to carry Big Daddy's custom Harley-Davidosn XLCH Sportster until he traded up to a show-stopping Triumph custom.

Powered by a Buick V6, Mega Cycle—originally called Captain Pepi's Motorcycle and Zeppelin Repair, which was changed by car show promoters—did the car show circuit for about a year until Big Daddy traded it to a junkyard owner for the rear clip out of a VW Bug. The car sat in front of the junkyard for a year where it served as a sign for the yard and, sadly, a home for the yard's resident dogs. When Big Daddy came to pick it up a year later the interior was utterly trashed. Roth traded it again, and the car changed hands numerous times throughout the 60s, 70s, and 80s. During that time it was restored a couple times, toured on the show car circuit again, lost its Triumph, regained its Triumph, and generally lived a hard-knock life.

The last real news I could find about the Mega Cycle is from 2009. It was restored by a guy named Fritz and was auctioned off for charity in September of 2009. After that, the trail grows cold. The guy who bought it at that 2009 auction had owned the car before, four times to be exact, and I assume he still has it.

I know this thing is only tentatively motorcycle-related, but you'll have to indulge me here. Info on the actual bike part of this vehicle is extremely scarce. We know it was a Triumph, and that it was owned by a guy named Bob Aquistapase before Big Daddy got hold of it, but that's about all I could find out. Oh, and that it was painted metal flake blue on one side and metal flake green on the other. So just enjoy the pictures and soak up the authentic 60s-era cool of the Mega Cycle in all its glory.

Oh, and by the way, if you have any information regarding Mega Cycle (current whereabouts, specific engine, build specs, etc.), or any good pictures of it, get at me.