Urban Assault: Surviving in the City 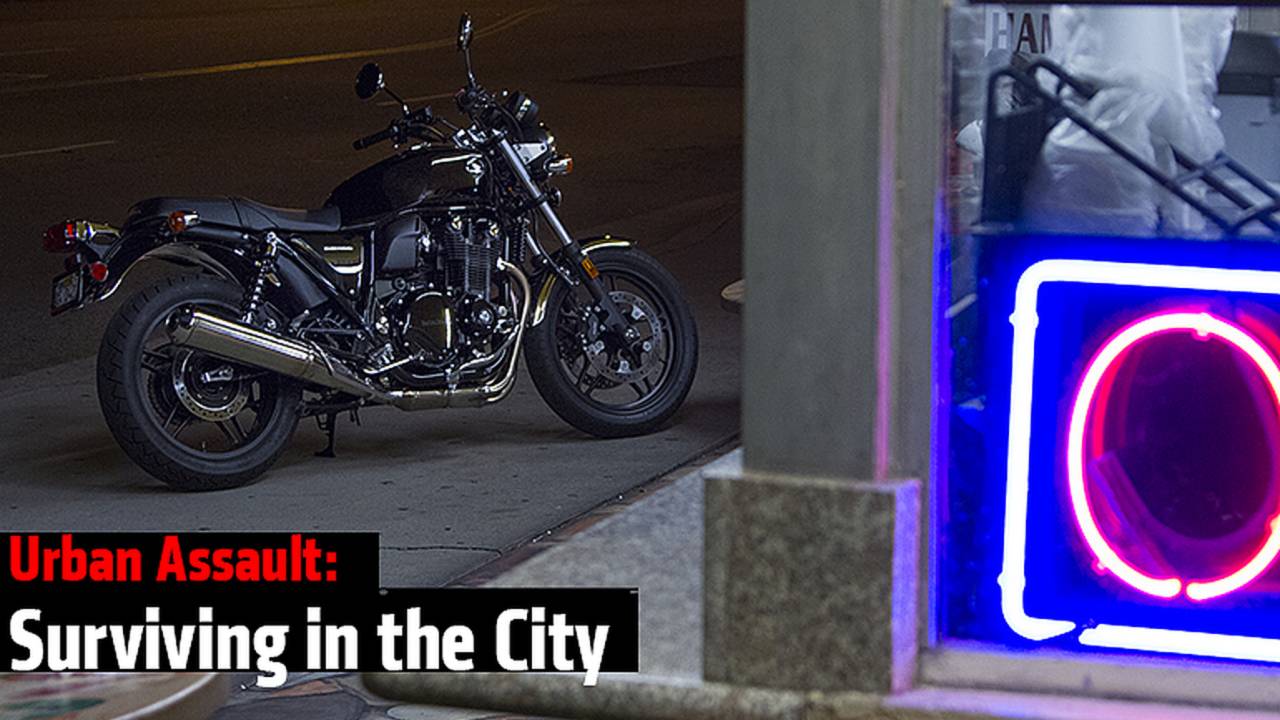 Urban Assault: Surviving in the City We don’t all live in the suburbs. Riding a motorcycle through the stoplight-filled, traffic-congested city can...

We don’t all live in the suburbs. Riding a motorcycle through the stoplight-filled, traffic-congested city can be bothersome, but necessary. So what about those of us who live downtown and still want to enjoy riding?

We spent the day riding Honda's throwback bike, the CB1100, through Los Angeles to show what it’s like to live with a motorcycle in the city. New for 2014, the standard CB1100 is offered in blacked-out trim. The CB1100 DLX, also debuting this year, comes with .5 gallons more gas, ABS, dark red paint and natural-finish engine. Honda made it even more retro with a four-to-two exhaust. We hope to do a review on the Deluxe model next month.

While the CB1100 is a great bike for city living, we picked it for visual purposes and not as the end-all, be-all urban bike. It’s great for many reasons: high stance, good ground clearance, comfort, enough low-end torque, short rake, balance and minimal weight for a big-cc bike. Feet and hand placement fit perfectly in between aggressive and causal riding—sit up tall to be on the bars or lean back for long cruising. There’s little in the way of bells and whistles, as the base model originally lacked ABS as a standard option, but you don’t need thrills like cruise control for street use around town.

It comes with its fair share of drawbacks, however. It's expensive and flashy—the base model retails for $10,399 and the Deluxe at $11,899—which means it's more prone to theft and vandalism. The big, heavy four-cylinder is less fun than a smaller-cc lighter weight bike, which brings up a huge debate for urban riding: big cc, or little?

Many believe bikes like the Suzuki TU250X, Honda CBR 250, or Kawasaki Ninja 250R are better for around-town riding. They’re cheaper, tiny, easy to fling around, nimble and did we mention cheap? If you’re an experienced rider who likes to put down miles on the weekend, escaping your concrete jungle, then you might quickly outgrow a small -cc bike. You’ll be rattling the fillings from your teeth trying to keep up with your buddies when weekend riding, and they’ll make you pick up the tab because you paid half what they did on your ride.

If you make a major investment in a motorcycle then you want to be able to do the most with it. Never buy a bike you can’t handle, but growing into a bike is sometimes a better investment than buying a bike that’s too small for you. Upright seating position on big bikes like the CB1100, Triumph Bonneville or, dare-we-say, Harley Sportster might be good options for pulling double-duty, along with any decent adventure bike.

If you trust your skills enough and don’t want to be limited to city streets or short highway rides, bikes like the Yamaha FZ-09, Triumph Speed Triple, KTM Duke, or even a Honda NC700X might be good options. If you’re someone hardcore who wants to put on miles, try  these sports bikes for long trips.

It’s all in your riding style though Don’t invest in a bike that limits your ability to ride. There’s nothing wrong with using a heavy, big bike for urban riding, but a high seating position and low rake is important for low-speed accident avoidance. That’s why we liked the CB1100, we could zip through the city streets thanks to a snappy throttle response and low-end torque, sat above the bars with knees in the tank for quick maneuvers and reach full lock in either direction without having to extend our bodies too far.

Things you Need to Know

The tie for best and suckiest part of riding a motorcycle in a city is parking. Sometimes it's great, like in San Francisco where you plant your bike in any area big enough to throw a kickstand down. Share a spot, sidewalk or asphalt with ease, but there’s one major problem: it’s not legal. Every state, county, and town is different, but in California you're technically not supposed to share a metered spot with anyone else, not even other motorcycles. We know of few solutions for figuring out how to park in your particular area. The best method is asking a deliveryman, police officer or other motorcyclist. If you see another motorcycle parking funny, it doesn’t necessarily mean they didn’t get a ticket, it just means they didn’t get a ticket yet.

Buy a new bike with a warranty. Having basic hand tools are a must and avoid buying the one-use-only crap tools you find at the auto parts stores. Those won’t just break, but not even fit the right size nut. Also, a broken tool isn’t often better than a stick.

If you're not a mechanic and you think you don't need tools, then don't call me for help when you break down. Yes, AAA in some states will cover motorcycles for about $50 extra a year. So invest in the proper coverage, but when you're on the side of the highway with a loose battery cable and the closest tow truck is three hours behind, then you'll wish you had a screwdriver or adjustable pliers. You don't need a certification from AMI or MMI to keep silly mishaps from ruining your ride.

Avoid buying name brand and Xmas-gift style tool bags; they're over priced and feature off-brand, waste-of-money tools. Know what bike you have and pick up a handful of basics at Harbor Freight or the local hardware store. Adjustable pliers, three open-end wrenches with different sizes on either end, will cover almost any bolt you can fix on the side of the road. Also a lot of the outdoorsman-type multi-tools don’t work as great as old fashion pliers and screwdrivers.

No Garage, No Problem

Exposed rotors, polished wheels, open engine, transmission and a sloppy chain or belt means a messy machine. Investing in a decent motorcycle cover, $40-$70, will deter thefts and vandals as it's one more thing they most tamper with and it keeps it clean. Some of the best cleaner I've run across is still S100—spray it on, wash it off, removing grime and dirt without damaging paint. If you're in an apartment complex that doesn't have running hose water then try some of the new Wash and Wax, like those from Meguiar’s or Mothers.

Lock up your motorcycle and then when you're done, lock it up again. Two guys, a pickup truck and one minute are all it takes. The first and last place I saw adequate motorcycle parking was my freshman year of college at the University of North Carolina Charlotte. Motorcycles were locked to loops of bent rebar buried inside concrete slabs. It’s always best to lock your bike to something, not just to itself.

A motorcycle lock is a must-have and worth the investment. A cable lock is what you use for a bicycle; don't waste your money. A hardened steel U-lock is the best thing you can buy for your bike. Even though sometimes hard to find a place to lock it to, it’s still better than a disc lock, which doesn't prevent your bike from being picked up. I personally use a U-lock my grandfather owned—they're bullet proof. Find one used or at a swap meet, or buy it new from a good source. Be prepared to dish out around $100.

It’s not always possible to lock your bike to something, and for those times a rotor lock might have to do. Don't forget, even the smartest guy in the world makes mistakes. If your lock doesn't come with a plastic-rope-handlebar reminder, buy one for $5. The motorcycle shop I used to work in had a box of bent rotors from guys who forgot to take them off before riding. If you aren't one of the guys who brags about riding a motorcycle by carrying his helmet everywhere, universal helmet locks are relatively cheap around $20.

Riding in the City

It doesn’t have to be a complete pain to ride city streets. If you don’t plan on any highway miles, pick a bike that’s water cooled and small-cc. All total budget around $200 in extra stuff ($100 lock, $50 cover, and $50 AAA). Ultimately it’s cheaper than paying rent on a garage, gas for a car or replacing your bike when it’s stolen.