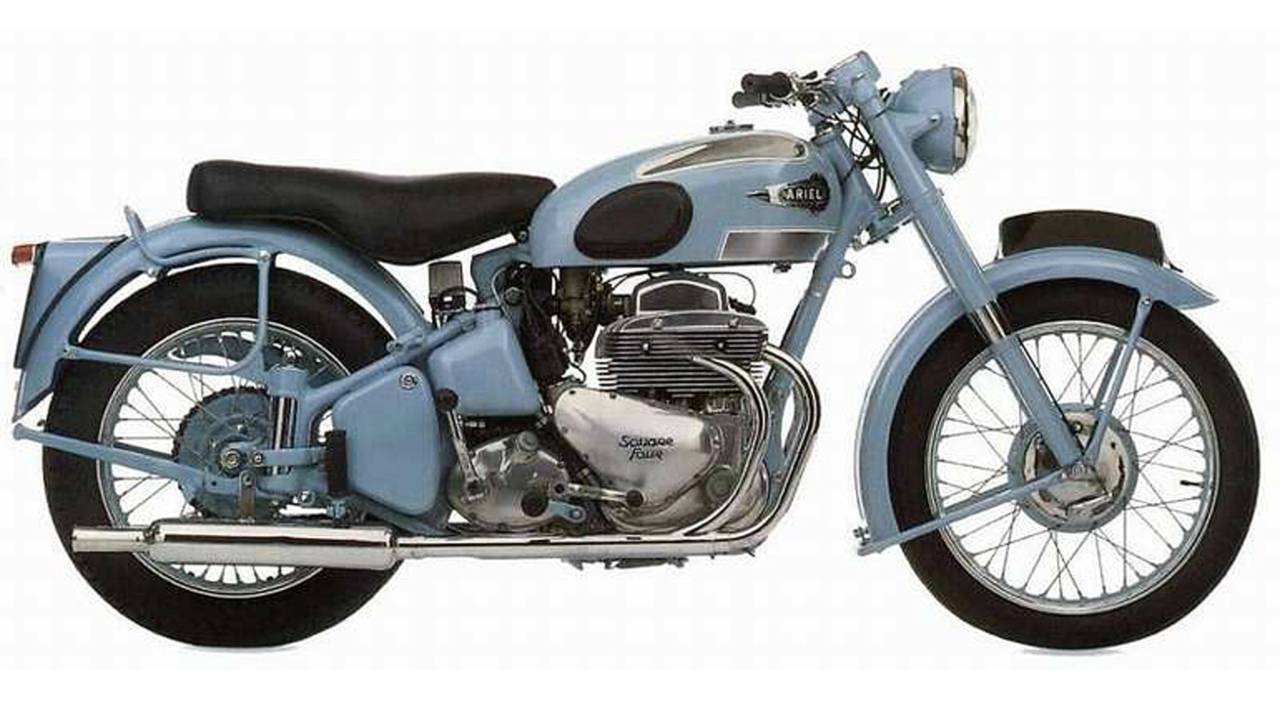 Square as a box and as cool as it gets

I've been pretty open around here about my love of weird engine configurations. My love of triples knows no bounds, and I'll take a longitudinally-mounted inline four or a rotary engined bike over a bog standard V-twin or transverse inline four any day. Today on Cycleweird, we're going to talk about a bike that was once the Cadillac of British Motorcycles but has fallen sadly into obscurity over the decades since its parent company went out of business. Friends, I give you the Ariel Square Four.

NOTE: I realize that the Square Four is more obscure than actual, straight-up, pants-on-head weird, but the engine is kinda kooky so just work with me here.

Way back in 1928, a young British engineer and motorcycle designer named Edward Turner—yes, that Edward Turner—was kicking around England looking for full-time work. Along with his resume, he carried with him the plans to, what he considered to be, a revolutionary new four-cylinder engine. Four cylinders had been a thing in motorcycles for a while by the late-20s, but Turner believed that they were, on the whole, large, loud, inefficient, and vibrated too much.

A cutaway of an early Square Four motor. Peep those crankshafts.

Turner's engine was a box-shaped mill with two opposing crankshafts and its four cylinders arranged in a square – two forward and two aft. It was, by and large, two parallel twins mated back to front on a common crankcase. The crankshafts were coupled by geared central flywheels and rotated counter to one another. When it all worked correctly, two diagonally-opposed cylinders were at bottom dead center while the other pair was at top dead center. In theory, this arrangement would cancel out the gyroscopic effects of the rotating assemblies which would substantially reduce vibration when running. He called his engine the Square Four.

For weeks, Turner went from one manufacturer to another shopping his engine around with no takers. Until, that is, he stopped in at the headquarters of Ariel Works Limited in Bournbrook, Birmingham. Ariel's head honcho Jack Sangster was so impressed with Turner's engine design that he immediately offered the young engineer a job.

For those of you not familiar, Ariel was a pretty important British bike maker from the golden age of motorcycle manufacturing. Founded in 1870 as a bicycle manufacturer, Ariel first started producing motorcycles in 1902. Throughout the first couple decades of the 20th century, Ariel produced a number of great bikes with engines that were either bought from other companies – like White and Poppe – or built from designs provided from outside engineers. It wasn't until 1926, when Val Page from JAP was brought on board, that Ariel had their own in-house design team. Ariel went through a number of owners over the years, finally ending up under BSA's umbrella. The company produced motorcycles until 1967 when it was disbanded by BSA, who then produced weird, small-displacement trikes badged as Ariels until 1970.

I think this lady is Stephen Fry's great-grandmother.

When Turner joined the team with his new engine design, he was paired up with a junior draftsman named Bert Hopwood—yes, that Bert Hopwood—under Page's watchful eye. After a grueling eighteen months of development and testing, two prototypes of the brand new Ariel Square 4 was unveiled internally much to the delight of Ariel's front office. These revolutionary machines – essentially old Ariel 250s with the new engine shoehorned into the frame – featured cast iron 500cc, air-cooled, single overhead cam, square four engines with enclosed valves and a gear-driven oil pump. That was some pretty heady stuff since at the time, exposed valves and manual, total loss oil pumps were still the state of the art in motorcycle engine design. The engines breathed in through a single carb mated to an X-shaped intake manifold and breathed out through a pair of common exhaust ports in the front two cylinders.

The rest of the bike was typical late-20s motorcycle fare. It had a girder front end and a hardtail rear with a sprung seat. Starting was kick only, it featured a magneto ignition system, and the fantastic new engine was mated to a pedestrian, parts bin four-speed, jockey shift Burman gearbox – a cost-saving necessity due to the onset of the Great Depression. Gauges were mounted in the tank, and they'd stay there until the 50s when the bike got a more modern instrument cluster. The brakes were drums fore and aft, and the rest of the running gear was what you'd expect on a bike of that vintage.

The 500cc Square Four went public at the Olympia Motorcycle Show in late 1930 as a 1931 model. Both prospective riders and the British motorcycling press went nuts for the new bike, praising its unique power plant and advanced design. Motorcycle journalist Dennis May, writing under the delightful pen name Cyclops, referred to it as the Squariel in a 1930 issue of Motor Cycling Magazine. That name would stick with the bike through the rest of its production.

In 1931, the Square Four won the coveted Maude's Trophy which was a test of durability, reliability, and ease of use. Victor Mole, Ariel's marketing manager, came up with a set of tests called the Ariel Sevens, which involved putting different bikes through their paces with weird tests based on the number seven. For example, one test involved seven schoolboys each kicking a Square Four engine to life seven times and another involved running it at 60 miles per hour for 700 miles. The new bike passed both tests with flying colors.

In 1932 Ariel upped the engine's displacement to 600ccs  to meet customer demands for more power and the ability to haul a sidecar. Over the next few years, the Square Four engine went through a number of redesigns and reconfigurations to improve lubrication, cooling, valvetrain efficiency, and reduce weight. In 1935, the Square Four got its biggest upgrade, and a dramatic increase in power and performance, when a new 1000cc engine was released alongside a redesigned 600cc mill. These new and improved Square Fours sold pretty well for Ariel and were popular among the motoring public right up until the outbreak of WWII brought motorcycle production to a screeching halt.

A '39 Square Four with the optional plunger rear end.

After the war, during which Ariel mainly built the W/NG 350 for the British Army, the company was eager to get back to work making civilian motorcycles. As soon as it could, Ariel—now owned by BSA which is its two-thousand-word story—got back to producing the pre-war Square Four with plans for its future improvement. In 1947, the Square Four got a dramatically upgraded suspension with oil-damped telescopic forks replacing the old girder setup, and the extremely fiddly and maintenance intensive Anstey plunger rear suspension – which had been an option in 1939—was now standard equipment.

The Squariel got a major upgrade in 1949 when cast iron was abandoned in favor of alloy engine castings – which reduced the bike's weight to a positively svelte 435 pounds. Other improvements included a battery/coil ignition system in place of the old, busted magneto system and improved cooling for the notoriously hot rear cylinders. With 45 horsepower, the Square Four was good for 90 miles per hour, which was no mean feat on a plunger-sprung bike.

An extremely sexy '49 Squariel with the upgraded forks and an optional pillion seat.

In 1952, the Square Four got its last upgrade with a completely redesigned cylinder head which featured four separate exhaust ports and headers, along with a host of smaller improvements. This version, known as the Mk.II, soldiered on unchanged until 1959 when the old, reliable Squariel was put out to pasture so that Ariel could concentrate on smaller displacement two-stroke bikes. In 1966, Phil Vincent—yes, that Phil Vincent—lamented the passing of the great Squariel in an issue of Motor Cycle Magazine.

"Alas, in 1959 the Square Four went out of production, a victim of the modern trend towards small, high-revving modern power units. The demand had tailed off a bit, and with reduced output, the price would have had to be hoisted excessively high. At the time it was approaching £350 ($1,243.14, or roughly $10,493,22 today) — out of reach of all but a few of the potential buyers."

The Squariel toward the end of its run. Check out its little brother the Red Hunter in the back there.

As much as I love BSAs and Triumphs, I think the Square Four is my favorite old British motorcycle. It has a ton of character, and I love everything about the engine. It's not much of a barn-burner, but I'd love to have one in the garage, especially a sidecar rig, for some weekend family cruising. Check out the video below for a look at a fantastic Squariel resto. I love everything about it but the tan seat.