Bolivia is the New Bonneville 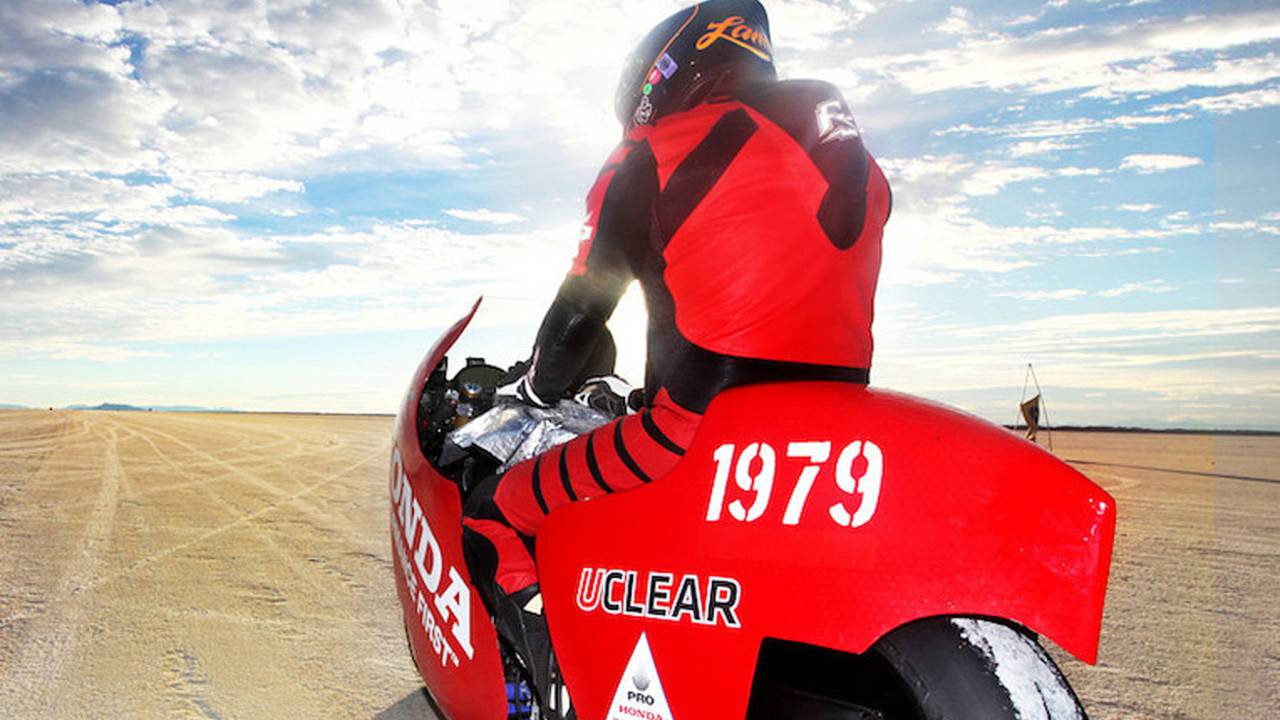 When Al Lamb isn’t selling Gold Wings and Groms at his Dallas Honda Dealership, he’s piloting a modified CBR1000 at irresponsibly fast speeds. In the last decade, the 350 mile-per-hour barrier was broken on a streamliner motorcycle, and ever since then a few dedicated riders have been chasing 400mph on two wheels. A handful of die-hard land speed freaks are chasing another aspiration: To be the first to pilot a “sit-on” motorcycle past the 300mph mark. When we hear salt flat land-speed run, the Bonneville salt flat’s 40-square-miles of sodium-paved prehistoric lake bed typically comes to mind. But recently a handful of seriously brave riders trekked across the globe to the Andes mountains in Bolivia to compete in The Top of the World Shootout at the Bolivian Salt Flats.

Also known as the Salar de Uyuni, the Bolivian Salt Flats is the largest salt flat in the world at 4,633 square miles. Situated at 12,000 feet above sea level the salt flats extend out for miles from the base of the Tunupa Volcano which is found on the northern. One of the daring racers to make the trip to Bolivia last month was Al Lamb, the owner of Dallas Honda and the first to fork over the five-figure entry-fee required to participate in the South America land-speed shootout.

Lamb is no stranger to salt-flat land speed record attempts, having cut his teeth on dragstrips and at Bonneville. His forced-induction Honda is a result of years of development and fine tuning, collective days spent doing wind tunnel tests, and trying to fix one problem without creating another.

“We’ve had aerodynamic issues that we’ve been able to address by lengthening the bike by six inches,” Lamb said. “Unfortunately, by doing so it moved the center of gravity, which created a new problem – a noticeable, and debilitating, oscillation around 160mph that we addressed by actually building a weight box in the front of the bike and filling it with 60 lbs. of lead.”

The partial streamliner uses the Honda’s stock swingarm, though the frame has been extended by around 6". An AirTech fairing has been heavily modified, the machine’s fuel-tank houses the turbo-charger’s ice-water intercooler, and a MoTec ECU automatically regulates every gear’s shift point. All this results in a two-wheeler that dynos around 500hp. The bike is a total beast, even with the turbo-charger not working (due to an electrical failure) it was capable of breaking the 200mph mark without even leaving third gear.

To make this all possible, a formidable effort was required not only to get the motorcycles to Bolivia, but to get all the required permits, transport all of the equipment (Lamb had to ship the CBR1000 and a few crates of spare parts after some customs snafus put an end to his plans of sending everything in a 40’ shipping container), and gather the dozens of team-members and the other various individuals required. One of the most renowned experts in preparing salt courses, Mike Cook, was flown in to prepare the 15-mile stretch for the record attempts. Charlie Hennekam was the FIM (Fédération Internationale de Motocyclisme) official that had to be on site to certify records over the course of the five days of the shootout that took place last month.

Lamb’s dedication and passion for land speed racing is undeniable. After braving the logistical headache, slapping down an ample chunk of cash, and traveling across the world, the seasoned salt flat pilot was undeterred by the FIM’s South American delegate warning Lamb that he and his team being robbed or kidnapped was a legitimate possibility. The man kept his eyes on the prize and didn’t let the ample reasons not to partake in this competition stop him.

“I like the big speed,” Lamb said. “To ride a land speed motorcycle takes kind of a different attitude. You have to love speed – the engine screaming; feeling the tires hook then break loose; you have to love being there. Riding the ragged edge, as I call it.”

The 2014 Dakar Rally - which had a route that went through Bolivia’s Salar flats - resulted in the South American country receiving a massive uptick in tourism. Bolivia’s government took notice of this and seemingly grasped the potential revenue streams that hosting motorsport events can facilitate. Since then, the country has enthusiastically welcomed two and four-wheeled competition, increasing security while making the most of the new Chinese-built infrastructure. Even Bolivia’s President, Evo Morales, showed up to greet the racers and teams for the recent Top of the World Shootout.

The TOTWS abided by FIM rules as opposed to Southern California Timimg Association rules. This stipulates what kind of bodywork is allowed as well as other technical regulations. There are several different types of two-wheeled land speed vehicles (including scooters!). While bikes can be modified to have much larger, more aerodynamic bodywork, Lamb competes on what are called “sit-on” bikes, partial streamliners with specific rules stipulating what’s allowed, opposed to full-on streamliners where the pilot is fully inside the vehicle. Due to the altitude at Salar de Uyuni, the majority of bikes chasing a land speed record were all forced induction machines – primarily turbo-liter bikes, though a naturally aspirated stock Aprilia RSV4RR did partake in the fun as well.

Top 1 Oil was the main sponsor for this event, but as usual a myriad of other sponsors who make smaller contributions help to make this kind of enormous undertaking possible. In addition to being sponsored by Dunlop Tires, Snap-On Tools, CycleParts Depot, Fast Skinz, and his own Dallas Honda, Lamb is also sponsored by our very own Motorsport.com and has been since 2013. Unfortunately, despite a monumental effort, Lamb’s top-speed run of 265.8mph wasn’t enough to beat the 289mph laid down by Ralph Hudson aboard a GSXR1000-based partial streamliner.

Luckily, there is a whole year between now and the next Salar land speed shootout, so Lamb and his team have ample time to sort of the various gremlins and get the Honda ready for another attempt in 2018. If you’ve ever been close to 200 mph on two-wheels, then you know how much faster 170 feels than 120-130. I can only begin to imagine what close to 300mph feels like on a sit-on bike. Top 1 Oil has put together a legitimately cool eight-part series of episodes about the Bolivian land speed record attempts that are well worth a watch. The speeds are nothing short of insane.