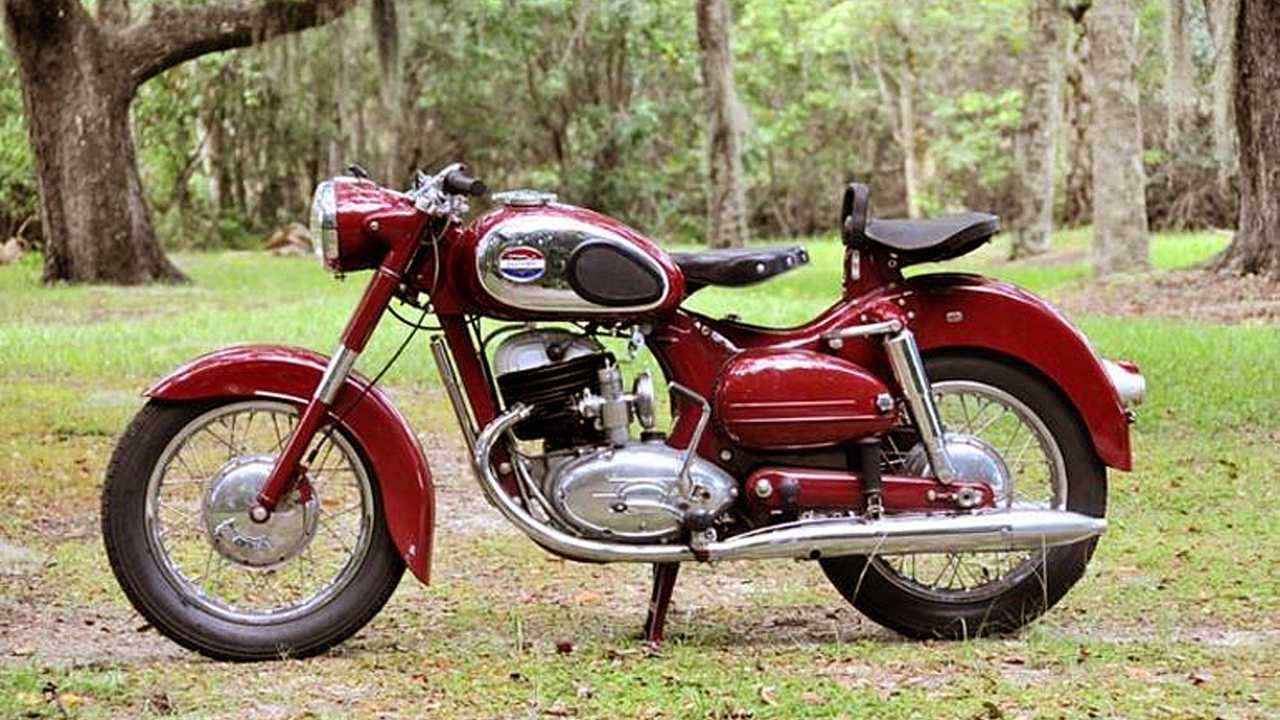 After a 40-year hiatus, Sears throws its hat back in the motorcycle sales ring.

A few weeks ago on Cycleweird, before I got distracted by the Amazonas, we talked about Sears and Roebuck Co.'s first foray into the motorcycle business way, way back in 1909. This week we're going to look at Sears' second attempt at mail-order bikes, this time by badgeineering Austrian and Italian bikes for the U.S. market.

Oh, and the same rules about sources and info from last time definitely applies to this week. While information on the Allstates is easier to come by than the old Spacke-powered Sears bikes, it's still 50 to 60 years old. I've done my best here to present the correct info on these bikes, but I may make some mistakes here due to the quality of the information. With that out of the way, let's get to it!

The motorcycle industry had changed a lot since the days of Theim and Thor and the mighty Spacke-powered Dreadnought. Out of the hundreds of American motorcycle marques that existed in 1915, only Harley-Davidson and Indian remained, and by the early '50s Indian was circling the drain.

Across the pond though, postwar Europe was experiencing a motorcycling boom. Bikes were easy to get and cheap to both produce and run during the bleak days of postwar rationing and recovery, so people flocked to them in droves. Small bikes – scooters especially – were in vogue and riders were buying new bikes as fast as Europe's many manufacturers could crank them out.

In the States, Sears had been selling Cushman scooters under their Allstate brand since 1948 and had been importing various Vespa models and selling them as Allstates since 1951. The company felt that maybe, with Indian locked in a death spiral and Harley-Davidson soldiering along making its big twins, there was a niche they could fill with smaller, more accessible motorcycles. Where to find them, though?

The Allstate Cruisaire 125. Actually a 125cc Vespa with an Allstate badge on it.

The answer, apparently, was Austria. In 1954, Sears began importing motorcycles from Puch, an old and storied Austrian manufacturer that made bikes, mopeds, and scooters. From 1954 until 1966, Allstate-badged Puchs in a variety of engine displacements and trim levels graced America's streets. They were rebadged as Sears motorcycles in '67, and continued as such until Sears stopped selling bikes in late 1969. In 1966, in an effort to expand their line of motorcycles, Sears started importing small-displacement four-stroke Gileras from Italy, which were sold under the Sears Motorcycle marque.

When I started out to write this part of the Sears-Allstate story, my plan was to do a little write-up on each of the bikes, like I did with the Spacke-Thor bikes from the beginning of the century. Unfortunately for me, in the course of my research, I discovered that there were roughly 85 million different Puch and Gilera models sold between 1954 and 1970. OK, that number may be an exaggeration, but you get my point. The sources are maddeningly confusing and contradictory, often vague, and, as far as I can tell, a lot of the different models were nothing more than trim levels with different names. So, in an attempt to get this story done before I turn 60, I decided to focus on the two most iconic of Sears' mid-century bikes: the Allstate/Sears 250SGS and the Sears 106 Super Sport.

Starting in 1954, Sears imported a slew of 125cc, 175cc, and 250cc Puchs from Austria for its Allstate motorcycle line. The 125 was a small, underpowered, primitive little thing with a twist-grip "rod shifter", a fan-cooled two-stroke single, and a hardtail suspension – little better than a minibike or moped. The 175 was much better and more like a proper motorcycle, and was more powerful, more stylish, more advanced, and more robust than the 125. The 175 was sold in two trim levels – Standard and Deluxe – and was a pretty good seller for the catalog giant. On top of the pack was the 250, Sears' top of the line machine and the bike I'll focus on here.

The Allstate 250 was a rebadged Puch 250SGS and was Allstate/Sears' top of the line motorcycle for the two decades in which Sears sold bikes. The big bike was powered by a well-built and reliable 250cc air-cooled, two-stroke "twingle" that put down 16 whole horsepower through a four-speed gearbox with chain final drive. Wait, what? Twingle? What's a twingle? I'm glad you asked!

A twingle, more commonly known as a split single, is a valveless two-stroke twin where both pistons share a common combustion chamber. In operation, one cylinder handles intake duties, the other exhaust duties, and they both squeeze together on the compression stroke. Weird, right? Supposedly, split singles have better exhaust scavenging, are overall more efficient, and run better at low RPMs than a standard two-stroke engine. The downside is that these engines are heavier, more complex, and more expensive to produce. I mean, there's a reason we don't see a lot of these things around today, right? I included a little visual aid below to help better explain what twingles are all about, because man, they're weird.

Anyway, in the 250SGS—and in the 175 which also had a twingle in it—the cylinders were arranged fore and aft rather than side to side as they were in many split singles, and both the intake and exhaust ports were in the front cylinder. This made for a, uh, whimsical engine configuration where the carb was located at the left-front of the engine right next to the headers. Not an ideal arrangement, but it worked pretty well for Puch.

Aside from the wierdo engine, the rest of the bike was pretty standard motorcycle fare. It had a hydraulic fork front end and a swingarm supported by two shocks in the rear, chrome laced wheels, drum brakes, a generator-driven electrical system, and a number of other standard features. Along with the bike, Sears sold a number of accessories for it like crash bars, pillion seats, extra lights, fiberglass panniers, etc. As for paint choices, catalog customers only had one color to choose from. According to my sources, the 250SGS came only in "Lustrous Maroon" for the first couple years on the market. Sometime in the late 50s or early 60s, that color was discontinued and the bike was sold in gloss black with chrome highlights.

The 250SGS sold for around $500 in the mid-50s—about $4,600 in 2017 dollars—and could be purchased from the catalog on a payment plan with 10 percent down and monthly payments of $42 a month. The downside to all this convenience is that the bike came disassembled and packed in a crate, so actually getting to ride your new catalog-bought cycle required some elbow grease and mechanical know-how.

As a way to spruce up their motorcycle offerings and inject some fire into their flagging bikes sales (maybe, my sources are a little vague on this point), Sears began importing Gilera motorcycles from Italy in 1966. These bikes were badged as Sears Motorcycles since the company had recently stopped using the Allstate name. The most common model was the 106 Super Sport. Available for a cool $389 – a very affordable $2,800 today – the Super Sport was a small, zingy, agile little bike with a 106cc air-cooled, four-stroke single that produced nine screaming Italian horsepower and had a top speed of about 60 mph. It had a four-speed trans, drum brakes, and all the other standard features motorcycle buyers expected at the time.

As you might expect, the Super Sport wasn't a barn burner. The low-powered engine and upright riding position made it more of a day-to-day runabout rather than a ton-chasing mini-cafe racer. For that, you had to shell out an additional Benjamin to get the SR124. The 124 was surprisingly quick and was fitted with a five-speed trans that got the 124cc engine's 12 Italian stallions to the ground via a chain final drive. By all accounts, the 124 was a blast to ride, but they were pretty uncommon back in the 60s and are rare as hens' teeth these days.

Tens of thousands of these things were sold to the American public between 1953 and 1970. In 1954, Allstate/Sears' best sales year, nearly 10,000 250 twingles found new homes in America's garages and barns. Unfortunately, sales steadily declined from there with a small spike in 1966 when the company dropped the Allstate marque and started selling the imported Gileras. By the late-60s, increasingly rigorous environmental regulations and growing pressure from Japanese imports were too much for Sears to contend with. The company officially ceased selling bikes in 1969, bringing an end to nearly two decades of mail order motorcycles.