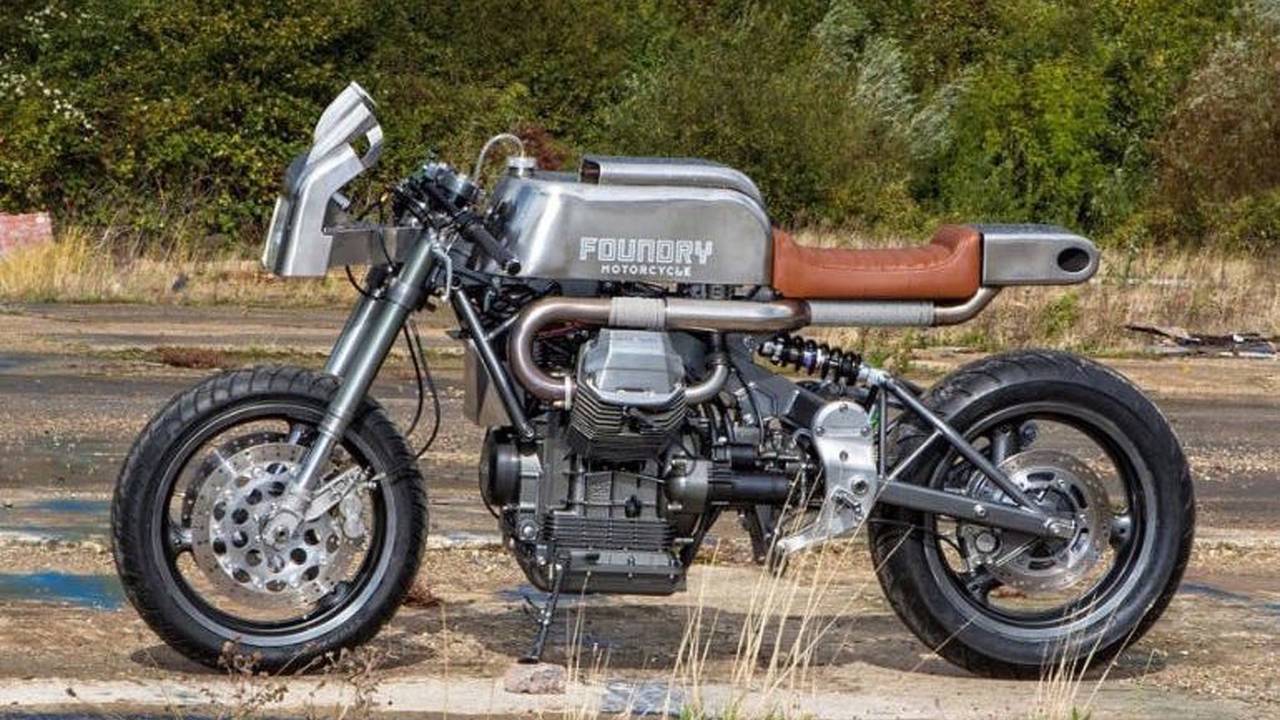 The folks at Bike-urious share their weekly look at the weird and wonderful.

It's a hybrid of "XL" bikes: the engine from a Harley-Davidson XL883 shoved into a (modified) frame from a Honda XL250R. Madness!

The original Honda motor put out about 17 horsepower, while the replacement Harley heart is good for approximately 57. That's obviously quite a bump, though the weight of this entire rig has gone up as well. There isn't much detail given on this one so it'll require a phone call (or ideally an in-person visit), but it's said to be street legal under a 1984 Honda XL250R title and everything apparently works.

Find this XL party for sale in Inglewood, California, for $7,500 here at The Garage Company.

Built by Foundry Motorcycle out of the UK, this custom Guzzi is one of the most distinctive builds I've seen in a while. Called "The Pipeline", it's based on a Guzzi 1100i Sport, though the fuel injection has been ripped off. The name comes from the shape of the exhaust, which rises above the heads - the builders call it a "mega industrial" look.

The fuel injection was replaced by a single twin-choke Weber carb. The headlight is from a Ducati SS and the cowl stores the ignition and speedometer. For more on the build, check out this article on the Bike Shed.

If you follow the custom bike scene at all, you have heard of Bryan Fuller. He has a shop in Atlanta and has turned out some very cool cutting-edge customs over the past few years. He also evidently made the frames for the Lloyd Brothers Ducati flat track team. As such, he has decided to do a run of 10 custom Ducati Street Trackers and is offering them up on eBay.

This is from the listing for Bryan's special #1.

It is only mocked up for visual demo purposes, and can be bought as is for $15,000. It consists of a Ducati 803cc crate motor in a custom chromoly frame, Ohlins fork, Fox shock, Brembo brakes, and EBC rotors. Rear sets, risers, handlebar, rims, hubs, spokes are all from top-of-the-line suppliers.

If you'd like, they will also sell you a turnkey, "finished bad-ass bike running tested, tuned, painted, to Fuller Level is $25,000." Pricey, yes, but basically a road-going factory flat track bike.

You can contact Fuller Moto in Atlanta through their website, or find more information in the listing here on eBay.

In the early 2000s, Kawasaki decided that a good way to stay competitive in the 600cc sportbike market was to just bump up displacement of their ZX-6R to 636cc. This was fine with street riders, but a bit of an issue for racers who competed in classes that were limited to 599cc. So Kawasaki also offered a limited-production ZX-6RR - the smaller engine size came with a loss of 2 horsepower (down to 123) but the RR gained a slipper clutch (apparently the first on a production 600), adjustable swingarm pivot, a super hard carbon coating to the inner fork tubes to minimize friction, and some cosmetic changes.

So despite the smaller displacement, the double R was a better bike for a certain type of rider. If one R is good, two must be better! For more on the double RR and why it may or may not have have been worth the extra $400 of MSRP, check out this review that originally appeared in the August 2003 issue of Sport Rider.

This example is further upgraded with an Ohlins steering damper and a Penske rear shock. It has 6,422 miles and looks just about new, according to the seller. Find this ZX-6RR for sale in Portland, Oregon for $5,495 here at Automania.

Magni is probably best known for the incredible bikes it made in partnership with MV Agusta, but over the years they also did some work with engines from BMW, Honda, and Moto Guzzi. MG's 1100cc engine provided the heart of the Sfida that you see here today.

Sfida is Italian for "challenge", which is exactly what you'll face if you ever have to source cosmetic parts for this bike. But it doesn't get much better in the world of obscure Italian sport bikes, does it? Some Sfidas were fuel injected, others had carbs, and all were powered by a Guzzi 1100cc V-twin that's tilted slightly to the right inside a chromoly frame to align the driveshaft correctly. Suspension is taken care of by 40mm Ceriani forks and a WP shock. For more information, check out this "Quick Ride" from Cycle World's time with a prototype.

This example has 3,800 miles and it's had one owner. The seller (different from the owner) says it's from 2000 but I don't believe that's correct. There are some modifications but all the original parts are included.

Find this Magni for sale in Geleen, Netherlands, with a BIN of $26,500 or best offer here on eBay.