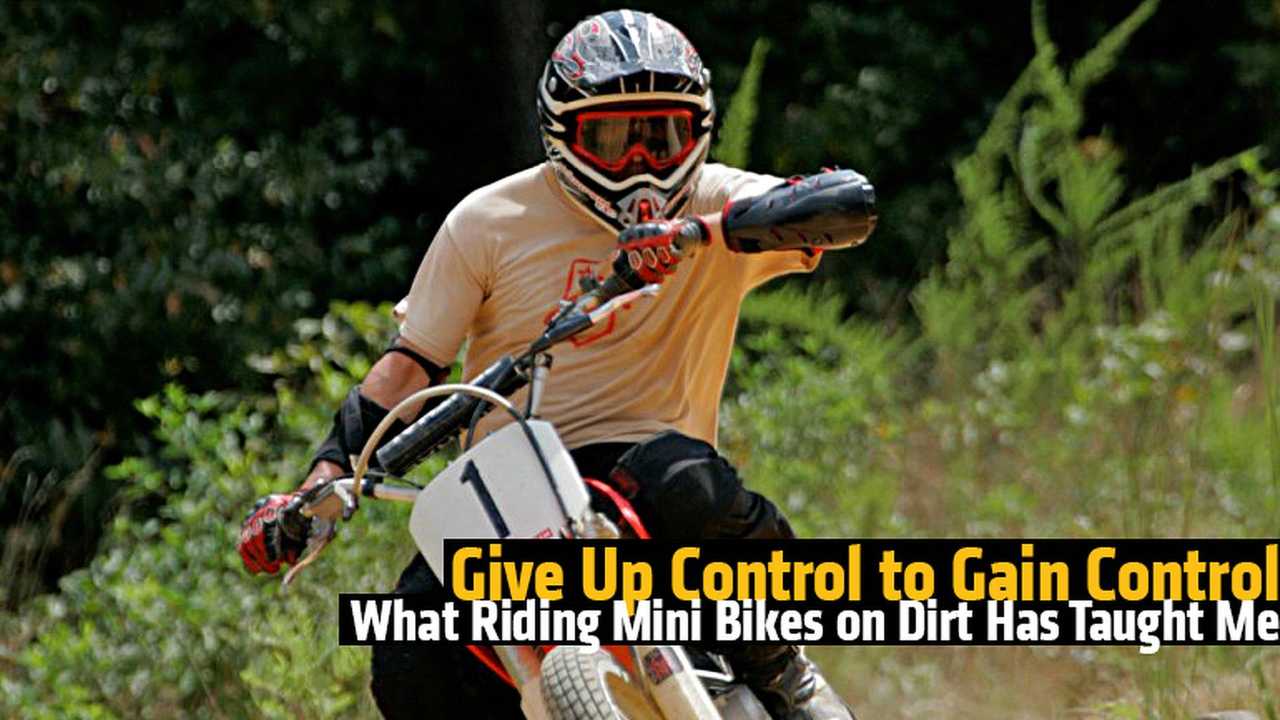 Cornerspin's Aaron Stevenson talks about the importance of learning the art of dirt riding.

I've told this story before, but I'll tell it again. When I first got into riding, I was on an unpaved gravel road and grabbed too much front brake. The bike was instantly unhappy and I fell over. I was only going 5mph, but the experience was fairly mortifying as it happened at a biker gathering. Everyone saw me. Besides my pride being seriously sprained, I also developed a fear of gravel.

I hated being afraid. I hated feeling as if in the right moment, I might lose control of my bike ... as if maybe my bike was conspiring against me. As a person who liked to tour motorcycles, this was not a great attitude to have. When you ride on the street, you need to be ready for anything. It might rain. It might snow. You might be having the time of your life in some great curvy roads, when all of sudden there's a rough patch of gravel in the apex of a turn and you lose the rear. What does it mean when the motorcycle loses control in these situations? The hard truth is that it is not the bike’s fault, but our lack of understanding that causes these moments.

Former racer turned instructor Aaron Stevenson sums it up best by saying, “riders are going to test their limits without understanding what the bike, themselves, and the traction is capable of it.”

READ MORE: How to Find the Right Motorcycle Schooling: All-You-Need-to-Know

So back to the original question, how do we learn about our limits that without hurting ourselves or our bikes?

This year, I found the answer.

Can you hear the angels singing?

What Can Dirt Riding Teach a Street Rider?

The traction component of mini bike dirt schools is what sets this type of training apart. Traction control is the first thing you'll learn… and no, I don't mean how to turn on/off a button on the dash.

"We have an expression: You give up control to gain control. If you have a set of motor skills and some responses that you've practiced that can be the difference between throwing your $20K bike (or your $5K bike, whatever it is) down on the ground or being able to ride it out,” Aaron told me. “No matter what you are riding on, you always have 100% available traction.

The difference is high friction or low friction. So whether you are riding on ice, in the rain, or unexpectedly hit antifreeze or whatever might be out on the open road, understanding the dynamics, how the chassis really works and having some muscle memory prepares you for the unexpected. Riding in the dirt allows you to go beyond the limit at a much lower speed with lesser consequences."

Shedding your fear of losing traction while riding can be a game changing skill that helps you navigate the treacheries of the road — pebbles, leaves, and gravel — with confidence. While the body positioning for the dirt bike is different, the feeling of losing the rear end is the same. Not to mention, knowing how to make a dirt bike slide is the most fun you can have on a motorcycle. If you want to spend an afternoon laughing your head off, go find one of these classes.

Mini bike dirt training doesn't stop at traction control. A good mini bike school can cover many other skills and techniques. Aaron explained what else you can learn from this training, "We can work on all the aspects of body positioning, and how those pieces will transfer to the road. We can work on understanding the grip in your right hand doesn't just make the bike "go." It's a tool for traction control, weight bias change, a tool to settle the chassis, steers the bike and more. We can work on vision, line selection, how to understand camber/off camber types of turns, how these things play together.

All these take aways transfer back to the street directly. The ergonomics change, but the dynamics stay the same. Again, gravity and centrifugal force, traction, friction, all of that stuff is the same. So the take away is that you have a full understanding of how the bike works and what the limit is after you've gone over it and survived.

”So while the lessons are applied to the dirt environment, they immediately translate to the street. And you can actually push the bike to the limit, make mistakes, and try again without the typical consequences. If you blow the apex in a corner, you can pick yourself up and try again. Try doing that on the track!

You may be unfamiliar with riding in the dirt, but you will eventually develop a serious love for the mini bike dirt experience. It's a place for me to experiment, push my limits, and try again when I fail. Because it is such a different environment from the street, you can start with a fresh mindset each time. And, most importantly, it's FUN. Consider checking one out - I really think you will have a blast and get some of the greatest education you've had on two wheels.

READ MORE: The Future of the Kawasaki Ninja H2 and H2R - Deliveries Under Way