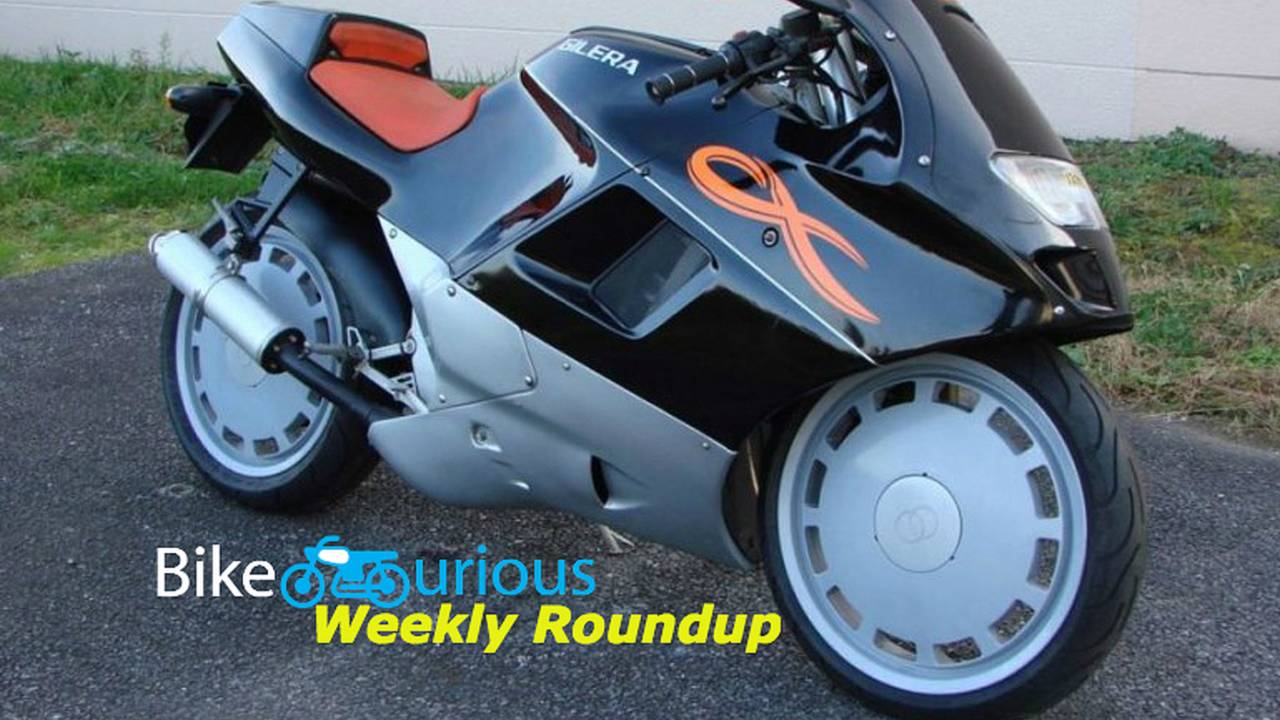 Llet’s take a look at our five favorite offerings from this week!

Introduced in 2000, the Cagiva Raptor was designed as an alternative to the Ducati Monster— they were even styled by the same man. Though, there are plenty of similarities: The Raptor comes with the V-Twin heart from a Suzuki TL.

While the Suzuki V-Twin made 124 horsepower in the TL, it has been retuned to about 105 in the Cagiva; however, you got more torque in the process. The base model (which is up for grabs here) was simply called the Raptor, and it looks an awful lot like a base Monster. There were two higher spec versions. One was the V-Raptor (I've actually featured one before), which got seven extra horsepower and a bizarre fairing. The other was the Xtra Raptor, which was introduced in 2001 and added carbon fiber, Marzocchi suspension, and a steering damper (among other things) to the V-Raptor package. Want to learn more? Check out this writeup from MotorcycleUSA.

This example (VIN: zcgm200aayv000793) has 9,900 miles (note: all the gauges are in kilometers) and everything is claimed to work. The seller is the third owner, he acquired it in 2005 and rode it from California to Illinois without a problem. Since that time, the seller has put on very few miles, a new front fender, new paint on the tank, and a set of Staintune mufflers. However, he wants $800 extra to include the exhaust in the sale. I love this bike— it will only get attention from those in the know...or people who like yellow.

Find this Raptor for sale in Springfield, Illinois with an unmet opening bid of $4,500 here on eBay.

File this under "bikes I've never heard of before." According to a period review from Cycle Guide magazine, the Carabela Caliente was Mexico's first MX bike. They said the engine power was competitive, acceleration was surprising, and the handling was excellent. Cycle World said “Mexico’s first small bore motocross export is light, well-finished, and capable of winning.” I say Caliente is a great tacky 70s name for a motorcycle.

Finding information on this bike was difficult, but it seems that the press really liked this bike — impressive for a first export attempt by Carabela. MSRP was $695 (optional Ceriani forks were available for $80) and the claimed dry weight was 183 pounds. The engine produced about 18 horsepower and it was fed by a 27mm Dell'Orto carb.

This example was "completely restored" with a veritable bevy of new parts, including a J&R exhaust (original is included, but it will need to be welded). Find this Carabela Caliente for sale in White Marsh, Maryland with an unmet opening bid of $2,950 here on eBay.

The coolest looking 125 ever built, Gilera's CX125 must have been an absolute show-stopper when the concept version debuted at the 1989 Milan EICMA. Swoopy bodywork paired with a single-sided suspension up front...and on a learner 125? I refuse to believe the average Italian rider who saw this in '89 thought the CX would make it to production, but just two years later they could have exchanged their hard-earned lira for a motorcycle that somehow still looks futuristic over 25 years later.

Alright, I'm done obsessing over a bike I haven't even had the chance to ride yet. The basic specs were approximately 30 horsepower out of the 124cc water-cooled two-stroke single, 264 pounds dry weight, and a top speed between 100-120 miles per hour (depending on who you asked). If you're as nuts about this bike as I am, then you absolutely must check out this article on OddBike where you can learn more about the history of Gilera and technical details of the CX.

This example has 2,059 miles and the seller says it's probably all original and that the engine runs well. Unfortunately, you'll only be able to get this with a bill of sale so I sincerely hope you live in a state that won't hassle you about that when you try and register it. This Gilera deserves to be ridden on the street!

Find this Gilera for sale in Santa Ana, California with an unmet opening bid of $5,900 here on eBay.

Yamaha's XT500 was an instant sales success and it led to a full series of XT bikes. Thanks to the big thumper of an engine and the ample ground clearance, this could be a fun bike to customize. And, two years ago, Scott Halbleib of H Garage did just that.

Highlights of the build include a CT175 gas tank, shaved and modified frame, Dominator headlight, custom split seat, custom exhaust with SuperTrapp muffler, Progressive shocks, crash bar, and a nifty custom mounting plate with mounts for a Rotopax fuel canister or Kriega saddlebag to be swapped out at your whim. For more information on this build, check out this article on Pipeburn.

It looks like this bike (just like yours truly!) will be at the Handbuilt Show in Austin, Texas next month if you want to pick it up there, or find this XT (VIN: 3H6001772) for sale in Lousiville, Kentucky with a BIN of $13,500 or best offer here on eBay.

The Moto Guzzi Stornello (Italian for starling) was one of the last four-stroke singles that Guzzi built. For one year only, they produced an "ISD Trial" model, which was a replica of Guzzi's 1963 ISDT bike. Just 75 of these were produced, and all were sent to the US.

The 123cc air cooled single produced 13.5 horsepower — good for a top speed of 65 miles per hour. MSRP of the ISD Trial was $589; a regular 125cc street-oriented Stornello would have set you back $429, and the off-road Stornello Scrambler was $469. For more information on this 1-of-75 Moto Guzzi, check out this article on Motorcycle Classics.

This example is claimed to be a 'true survivor' as it still has the original seat, paint, and tires. The seller has changed the battery, the oil, and the hand grips. It's having a little trouble maintaining idle, so I suspect the idle jet will need to be cleaned. The seller notes that at some point the bike was dumped, so the handlebars are slightly bent and the front fender strut has been repaired. There's also an aftermarket light switch, and the speedo has no drive so it still shows 1 miles and it never shows the actual speed of the bike. The battery is dead, but the magneto works so the headlight will throw off six volts of barely anything.

I'm in love. I vote you just fix the headlight, pull off the light switch, and enjoy your rare Guzzi. Find this Stornello Trial for sale in Albany, Wisconsin with bidding up to $1,425 and the reserve not yet met here on eBay.