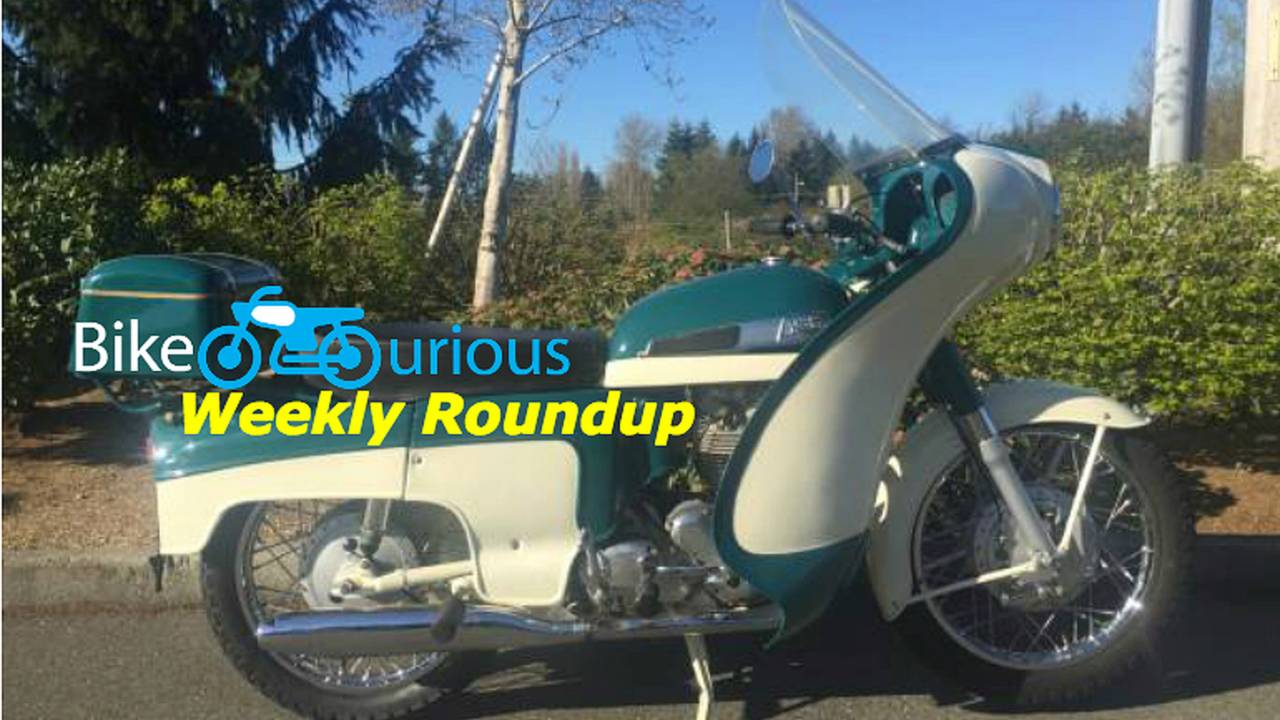 Top 5 Bike-uriosities – Week of 4/4At Bike-urious, we’re spending all of our time finding the most interesting motorcycles that are currently for...

Built between 1938 and 1940, the R51 was BMW's last sport bike before World War II commenced. It was an evolution from the R5 that gained telescopic front forks and a plunger rear suspension. 3,775 examples were produced with a 500cc engine that puts out 24 horsepower — check out how the valve covers look!

This example (claimed VIN: 8430) has been with the seller since the early 90s, when he imported it from Germany. The motor was "updated" to compete in vintage racing at Bley Engineering, including new aluminum cylinders, cylinder heads, and aluminum rocker arms plus a new crankshaft with Carillo rods and spline shaft drive. Impressively, the seller was able to win 13 races and multiple "First in Shows" in three years of vintage racing:

Find this R51 racer for sale in Marathon, Florida with bidding up to $25,000 here on eBay.

In 2001, MZ introduced the Baghira as an enduro powered by the thumper from a Yamaha XT660. Based on that, they also released a Street Moto—basically a big supermoto that was only available in yellow. I think they're cool because they're so different, and because you can snap them up at a reasonable price. But for people like me who don't care for yellow, MZ also offered the Black Panther, which is the exact same bike, just in...black.

Finding replacement bodywork can be a chore, but thanks to the Yammy engine, mechanical maintenance is much easier than the bike's rarity would suggest and you still have 50 horsepower and 42 pound-feet of torque. For more on the Street Moto, check out this review from RoadRUNNER.

Available only in 1994 and 1995 in the US, the Mystic was a factory custom based on the BMW R100R. The changes were entirely cosmetic, but they were not insignificant. Nowadays a 'special edition' just means new paint, but the Mystic actually had several restyled parts. Some people don't get what the big fuss is about this bike, and I understand the sentiment, but it has become a cult bike and prices seem to be rapidly rising.

According to The BMW Boxer Twins Bible by Ian Falloon

This example has less than 28,000 miles and is claimed to look and run like it just came off the showroom floor. According to the seller, "every part is new or refurbished except for the drivetrain," and it comes with the original panniers and transmission circlip mod. The original seat is included but a custom seat by Don Weber is on the bike right now. I'd ditch the National Cycle fairing and put the original seat back on but this bike looks incredibly clean. Find this Mystic for sale near Portland, Oregon for $6,750 or best offer here on ADVRider (registration required).

After the Norton Dominator (what a great name) was released in 1949, it became the basis for the next three decades of Norton twins. It was conceived to challenge Triumph's Speed Twin, and available in several "Models" like the 7, 77, 88, and 99. This example is either a 88 or 99, which varied in displacement between 500 or 600cc, respectively.

The 88 and 99 were created by taking the venerable twin engine and shoving it into the instant classic Featherbed frame. For more on the history of the entire Dommie line, check out this great write-up from Classic British Motorcycles. A "Deluxe" model was sold that offered additional rear bodywork, as well. While the seller doesn't give enough information to say for sure if this Deluxe is a Model 88 or 89, he does say that this is "one of perhaps six in the nation and certainly the only one with this period correct fairing!"

This bike has had the same owner since the mid 70s and he's taken it to some cool places: the Isle of Man twice, the Continental Divide twice, and more. The bike is claimed to be almost 100% original apart from the Avon fairing, Craven top box, and a conversion to 12 volts.

Find this Dommie Deluxe for sale in —, Washington for $11,995 here on Craigslist through Moon Motorcycles.

Weighing just 156 pounds, the Honda Dream 50R features a four-stroke engine built by Honda's racing division, capable of seven horsepower at nearly 14,000 rpm. This incredible bike has a six-speed gear box, lots of trick racing features, and no kickstart or push button. To fire this up, you've got to bump start it. And if you want, HRC sells all kinds of go-fast parts available out of Japan. Want to learn more? Check out a write-up from Motorcycle USA. Or get the scoop directly from Honda themselves.

This specific Honda Dream 50R (VIN: AR021000290) is in like-new condition as it has never been ridden. It has spent its entire life as a display bike and the seller says it's showroom ready with the exception of a layer of dust. Find this Dream for sale in Liverpool, New York with a BIN of $4,699 or best offer here on eBay.