Riding On the Wrong Side: Living the Dream 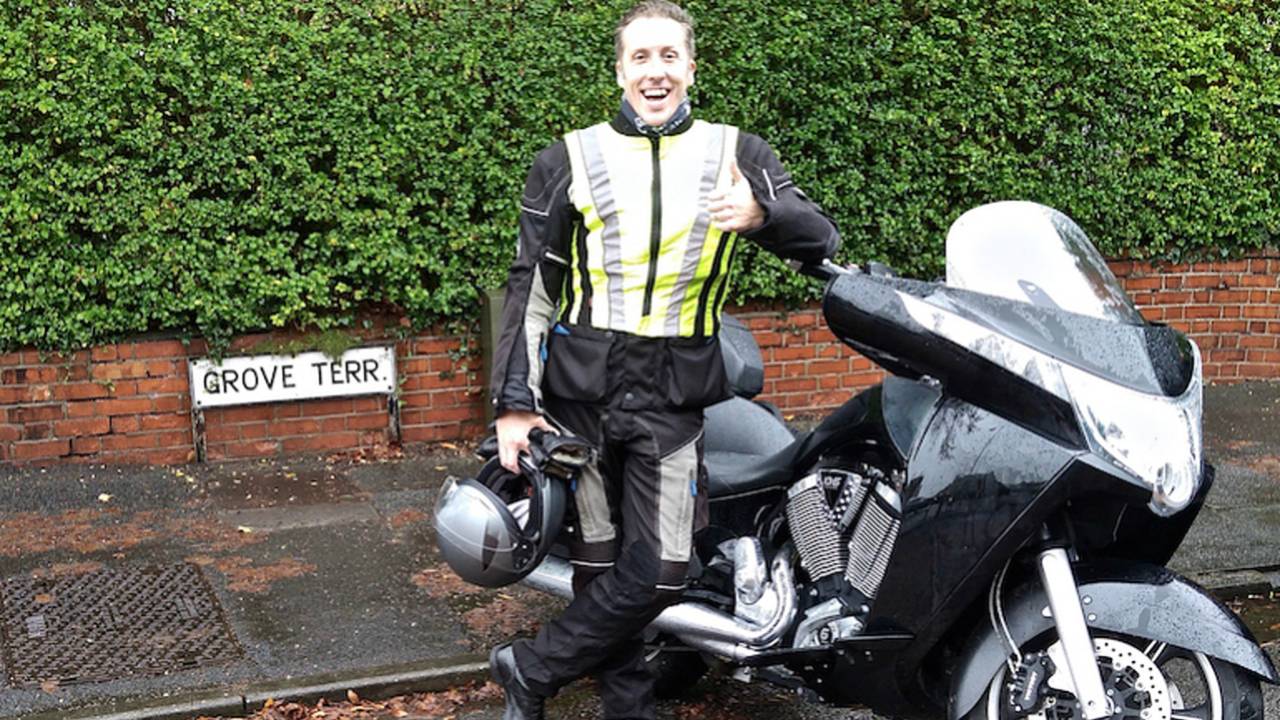 Riding On the Wrong Side: Living the DreamI'm sitting in a hotel in Yorkshire as I write this— about 300 miles north of my home in Cardiff. Known as...

I'm sitting in a hotel in Yorkshire as I write this— about 300 miles north of my home in Cardiff. Known as "God's own country" by locals, this region of England is rich in hills, curving roads, quaint villages and (when it's not raining) staggeringly beautiful sunsets.

I'm here to visit the factory where Alt-Berg boots are made. Primarily the maker of hiking boots, Alt-Berg also offers a handful of rigorously tested motorcycle boots popular among the Iron Butt/BMW-owning crowd. Partially my visit is personal, seeking out a set of riding boots that meet my ambition to buy local. The factory is the only place to see/touch Alt-Berg's motorcycle offerings in person, and I'm the sort of old-school dude who thinks that's important.

And partially my visit is professional, trying to determine whether there's a story to be had here and whether that story would fit on RideApart.

To the first purpose, the trip was a success. I ended up buying a set of Hogg All Weather boots, which will be made to order and shipped in the next few weeks. I got to wander around the factory where my boots will be made (amid a scrum of frightening machinery), and I got to meet Debbie, the woman who will be making my boots.

But to the latter purpose I question whether the fit would be a good one. The above paragraph is pretty much the meat of any story I might write about Alt-Berg— nice people making nice boots in a nice place —and it strikes me as perhaps a little too local for an international (often USA-focused) site like RideApart.

Alt-Berg Hogg All Weather: Nice boots made by nice people in a nice place.

Riding back from the factory to my hotel, I got stuck behind one of Yorkshire's surprisingly numerous slow drivers (30 in a 60? For the love of Pete!) on a road where passing was not allowed. It started raining heavily and within a few minutes the not-Alt-Berg, not-waterproof boots I was wearing were soaked through.

Wet, cold, frustrated and hangry (the factory visit had taken longer than expected and I'd not had lunch), I proceeded to throw a little tantrum in my helmet. For some reason I decided to twist in my mind the whole purpose of this trip. I cursed the fact I had come here and that my story idea had met a dead end.

"What a waste of time this whole trip has been," said me.

Actually, I just thought that; it was an idea that flashed through my brain. But it was an idea well enough formed to have intonation— an intonation I did not like. There was arrogance in the thought, a sort of "I'm better than this" quality.

And instantly I felt stupid. I found a place to pull off the road, killed the engine, stepped off the bike and took a few deep breaths as the rain faded to light drizzle. In the distance, I could see the clouds breaking and radiant sun pushing through.

View from my hotel room in Harrogate, England. Gorgeous even though spring has yet to properly arrive.

"You're riding a motorcycle, Chris...on a Wednesday afternoon," I reminded myself. "And, more or less, this is your job. Why are you bitching?"

This month marks the one-year anniversary of my joining the RideApart team, and moto-journalism became my full-time gig earlier this year. Although I have plenty of experience in other journalistic fields, I think it's fair to say I'm still something of a newbie on the moto side of things.

Though, from my past lives in television newsrooms and long-dead news websites, I know that one of the curses of a newbie is the fact that arrogance sometimes builds faster than experience. Which, I guess is more or less what happened to me on the ride today.

I had somehow managed to convince myself that I was an Important Person who did Important Things, and when faced with minor inconvenience I went all Stone Phillips on the road (a mentor of mine was a runner for NBC many moons ago and tells a story of the broadcaster losing his sh*t when she brought him a 7-Up, rather than the Sprite he had asked for).

But I'm not an important person, and I'm definitely not doing important things. I write about motorcycles, y'all. This is quite possibly the most ridiculous career a person could have. And although the pay's not great (I'd struggle to purchase any of the bikes I write about), I really have nothing to complain about. Even when a story idea comes to naught, even when I'm stuck behind someone's overly cautious grandmother, even when I'm hungry, even when it's raining.

Not me, but a representation of the spirit I should maintain.

Back in my hotel— now fed, warm and dry —I feel stupid and embarrassed about the whole thing. But rather than keep it to myself, I've decided to write about it to perpetuate the embarrassment, to better crystallize the experience in my mind and hopefully hold it as something to keep me from pulling the same sort of nonsense again.

I'm living the dream here, and if I forget that fact I risk losing the sense of excitement that comes from getting to spend so much of my time astride a fire-driven dandyhorse. Which would be very sad from a personal point of view, and also negates my ability to do my job well.

So, yeah. Today I let myself temporarily forget how good things are. No one saw it, no one but me was affected by it, but I'm putting it out there on the internet so that, hopefully, it won't ever happen again.