12 American Bikes That Changed Everything 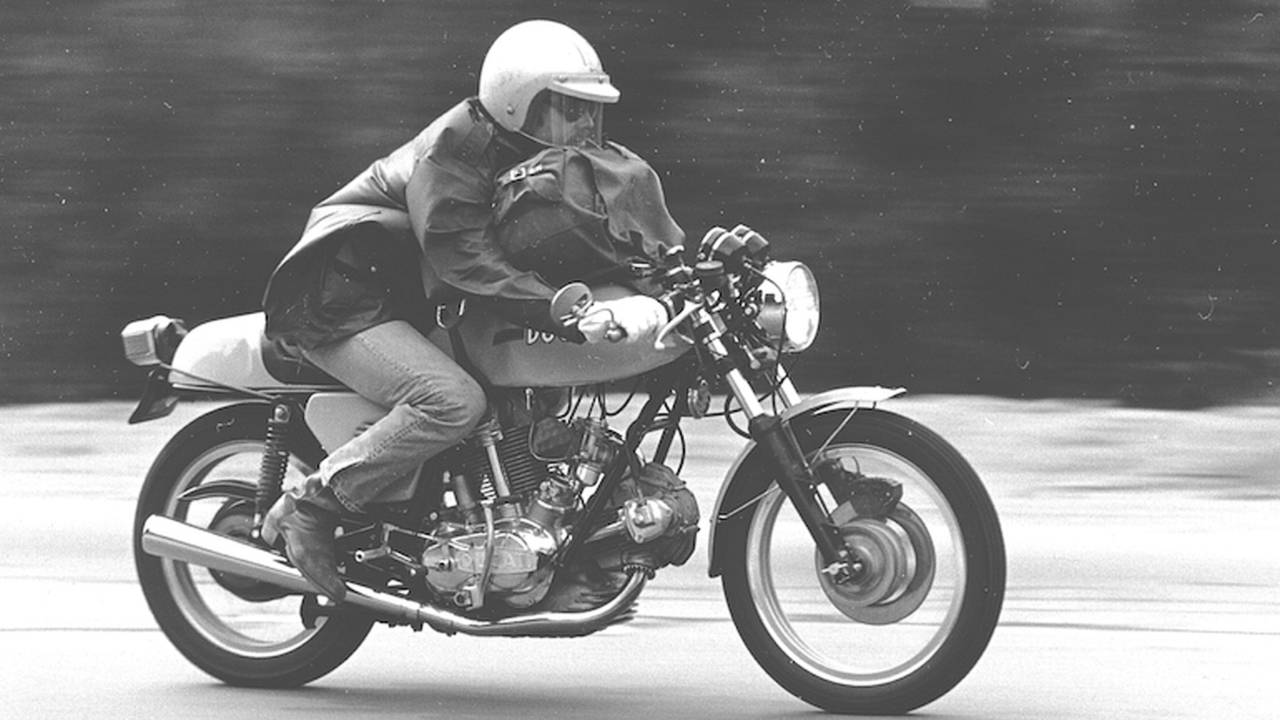 The question, posed by Director Cope, seemed simple enough: What were the Top Ten game-changing motorcycles of all time? What makes and models pulled the industry out of a hole, or created the next leap in technology and/or performance? Or worked to effectively change the general public’s perception of motorcycling? To which I rejoined, why does it always have to be Top Ten? Why not the Numinous Nine? Or the Great Eight? So we settled on the Elemental Twelve, since it sounded nice and had a number of e’s and I’s (There’s a hint in there). Then we subdivided it into two parts, American and European/British, since 12 overall just wouldn’t cover the whole historical showroom. So, here, more or less chronologically and entirely arbitrarily, are the American Elemental Twelve. Your monumentals may vary.

The Indian Motocycle Company of Springfield, Massachusetts, was America’s first large-scale motorcycle manufacturer. When they got under way in 1901 the country was on an industrial roll, flush with railroad and factory construction, roads and mines and oil wells. And personal transportation devices - primarily cars, bicycles and motorcycles. George Hendee and Oscar Hedstrom were both bicycle racers, and when the former’s entrepreneurial talents coincided with the latter’s engineering skills, Indian was in business. The ’02 is significant in moto-history because the brand’s inauguration a year earlier had produced only six or seven machines. The output for 1902 was 377 bikes. By the time Bill Harley and the Davidson brothers reached real production of about 40 bikes in 1906, Indian had a national dealership network and advertising program, and had built nearly 1,600 motorcycles. The game was on.

Most of the prominent early builders were performance oriented, meaning speed. While Harley-Davidson emphasized strength and reliability, Merkel, Curtiss, Cyclone, Marsh, and Excelsior were convinced that the fastest machine would prevail in the showrooms. Motorcycling, after all, was a sporting affair, and mere transportation was best left to the horseless carriage crowd. Joseph Merkel started building motorcycles in Milwaukee at the turn of the century. The speed and handling of his machines provoked more concerted efforts from Indian, Excelsior, and Harley-Davidson. Merkel was among the more innovative of the early builders, willing to try new approaches in the quest for both speed and reliability. The ’03 model, a 233cc single, used the front downtube as the exhaust pipe.

The Marsh brothers of Brockton, Mass., were among the first to build complete motorcycles, rather than adapting engines to bicycles, which they had tried in 1899. In 1902 their 500c single, with the engine a stressed frame member, was good for 60 mph. The brothers were keen on racing, but with the advent of professional classes in 1909 they withdrew to concentrate on road models. The company partnered with Charles Metz of Orient Bicycles in 1905, and developed the first 90-degree V-twin in the country. The 1908 model was a 1087cc twin rated at 10 horsepower. The advertising copy stated: “Forty-five degrees, the angle so generally used in motorcycle construction, is the worst possible angle, being always out of reciprocating balance.” (Potato-Potato)

Glenn Curtiss was arguably the most talented of the motorcycling pioneers. His combined skills as a bicycle racer, mechanic, machinist, engineer and promoter were unparalleled. He built his first single in 1901, and a few years later rode his V-twin to convincing dirt track victories. His was the first V-twin on the market in 1903, and used a single cam for both exhaust valves. In 1907 his V-8 powered machine set a speed record of 136 mph on a Florida beach. The V-8 project, an engine commissioned by the maker of a dirigible, marked Curtiss’ shift of interest to aviation, where he also did fairly well. The Hammondsport, New York, motorcycle company continued for five years under the management of his racing pal Tank Waters. The later models were marketed under the Marvel name.

When Joe Merkel sold his outfit to Light Manufacturing in 1909 and it moved production to Pennsylvania, the bar went up again with the addition of a bright mechanic/racer named Maldwyn Jones. The new Flying Merkel had the best front fork (which most other teams used), single shock rear suspension, and an integrated seat post/oil tank. This was the first, and last, period of direct factory racing competition among American motorcycle manufacturers. From 1914 to 1928, with a brief intermission for WWI, professional racing was staged on board tracks, dirt ovals and country gravel roads. The roster included Indian, Harley, Merkel, Excelsior, Thor, Cyclone, Henderson Yale and Pope. But by 1916 Merkel, after three owners, was out of business.

Cyclone holds the distinction of a company that achieved the most impact in the shortest time. The Joerns Motor Manufacturing Company of St. Paul, Minnesota, was in business for only three years, 1913-16, but posted notice that there was a new big dog in the game. Pro racing had then reached peak intensity in terms of factory competition. Harley-Davidson, which had always been the most reluctant to go racing, built an 8-valve V-twin to match Indian’s racer. Chicago’s Excelsior, now under the control of bicycle maker Ignaz Schwinn, was also a serious contender.

Designed by Andrew Strand, the 1000cc Cyclone V-twin reached 111 mph on a board track in 1914. The overhead-valve engine’s crank and rods were supported by roller bearings; the valves and magneto were driven by bevel-drive shafts. The Model 7 R-15, effectively the first factory cafe racer, was the fastest road machine in America. A hundred years later, the ex-Steve McQueen 1915 Cyclone racer sold at auction for $842,000.

The Harley J Model first appeared in 1915, with a 3-speed transmission, and their inaugural electric headlight. While Milwaukee’s total production was then only about a third that of Indian’s, Harley was showing more muscle in the market. The decision to finally compete with Springfield heads-up on the race track saw the first Harley OHV 8-valve arrive in 1916, but the 60-inch J twin was the workhorse road model. H-D did offer the J in a “stripped stock” version for privateer racers.The price was $250. Five years later the J series gained a 74-inch (1200cc) engine in the JD model, with battery or magneto. Popular in the growing sidecar market, the JD arrived just in time for a sharp drop in motorcycle sales. Professional racing declined as well, but Harley privateers with factory help were winning major races, and Milwaukee had passed Indian as the world’s largest manufacturer. The last phase of the J models was concurrent with the Great Depression, but the engineering lessons from racing figured in their development, and they scored well in the markets (civilian and law enforcement). In nine years Harley produced some 75,000 of them.

With Cyclone gone, Excelsior became the third of the Big Three. The new marketing headline was Ease of Operation, offering broadened appeal to ladies and gentleman as well as sporting youth. Not that Excelsior quit racing early on; they hired the best riders, sometimes away from Harley and Indian, and won major events. In 1917 the Chicago firm acquired Henderson, and a popular line of 4-cylinder models. In 1925, Excelsior’s 45-inch (750cc) twin was taking the measure of larger engines from Springfield and Milwaukee on the race track. The SuperX got overhead valves, and went on to win major races and national hillclimb titles in 1929 and 1930. The engine cases carried the transmission, and primary drive was via helical gears. But the depression carried well into the 1930s, when Excelsior left the market to Indian and Harley-Davidson - the last two standing.

Indian was not the same company it had been in its first two decades. But although Hendee and Hedstrom had retired, the tradition of competition, in the market and on the track, was still a fixture. Hedstrom’s engineering chores fell to Charlie Gustafson, and subsequently to Irishman Charles Franklin. A racer himself, Franklin expanded the Springfield tradition of race-proven designs. The two engineers undertook the build of a flathead engine that would surpass the best F-head and overhead-valve engines of the day. The 1000cc Powerplus engine proved them out, winning major board tracks, cross-country events and hillclimbs. Development of the Scout and Chief was delayed by the war, and in 1920 Indian was sold to a cost-conscious group of investors. Basically a smaller Powerplus, Franklin’s 37-inch (600cc) twin added a gear-driven primary and another camshaft. Indian bested Harley in the middleweight market, and the Scout stayed in production for 30 years.

Harley had followed suit with flatheads in the D and V models. But in 1935, the replacement for the JD engine would be the overhead-valve EL-61, as in cubic inches. The new V-twin soon collected the nickname Knucklehead, for its bulging rocker boxes. The EL was a whole new machine; the frame, fork and bodywork were new, seat height was down, and the touches of art deco styling did nothing to diminish the machine’s muscular look. And it was fast, the new king of the road. The depression was dragging its tired ass into history, and Milwaukee had the right motorcycle at the right time. Three years later the 61 was joined by the 74 (1200cc), with stronger cases, valve train, better lubrication and carburetion. With the advent of peacetime in 1946, Milwaukee recognized the need for a milder, more user-friendly platform for the big twin, so the FL (Panhead) consigned the Knucklehead to history in 1948.

In terms of performance, Indian had little response for the Knucklehead. The Chief remained a flathead, but Springfield had acquired the four-cylinder Ace for the developing sport-touring market. The Scout remained the stalwart middleweight and the Chief evolved more in styling than mechanical innovation. The art deco styling cues of the 30s reached their fullest expression in 1940, when the Sport Scout, Four, Chief and Police models had deeply valenced fenders. While Harley’s production was increasing after the war, Indian was in decline. Mounting production costs, inflation and the success of sporting British bikes were the foremost issues. The other was unhappy stockholders. Harley-Davidson was still a family business, and Indian came under yet another new owner in 1950. The statuesque 74- and 80-inch Chiefs became the swan song for Indian Motorcycles. Now, under the Polaris banner, the marque shows signs of a return to glory.

In terms of national popularity, the two most important motorcycles from the 30s through the 50s were the Indian Scout and Harley-Davidson K Model. Milwaukee had developed its original 45-inch (750cc) flathead to cover all bases in a competitive and constricted market. Sportsman racing using production motorcycles had supplanted pro racing in the 30s. Harley’s WL series, developed for racing by Californian Tom Sifton, provided plenty of competition for the Indian Scout. In the 50s the W became the K model, still a 750 flathead, but a transmission within the crankcases, hand clutch, foot shift and a rear swingarm. Modernity had arrived in Milwaukee, but performance had been left out in the cold.

On the road, the K bikes got smoked by the 500cc British twins. So the American Motorcycle Association, with some influence from Harley, set a 750 flathead/500 overhead formula for racing. And, despite considerable pissing and moaning from various factions, the Class C rules worked well. The battles enjoined by K models, Scouts, Nortons, Triumphs, and BSA are now legendary.

Postscript: Well, look here. That’s Twelve Elementals and we’ve covered only the first half of the last century. So Part Two would bring us up to date. The Terrific Twenty-four? Of course with the same format for the British/European marques... The Fantastic Forty-eight? This could go on forever. Which is fine.