Twenty-Four Hours in Seattle With a Ural - Part 2 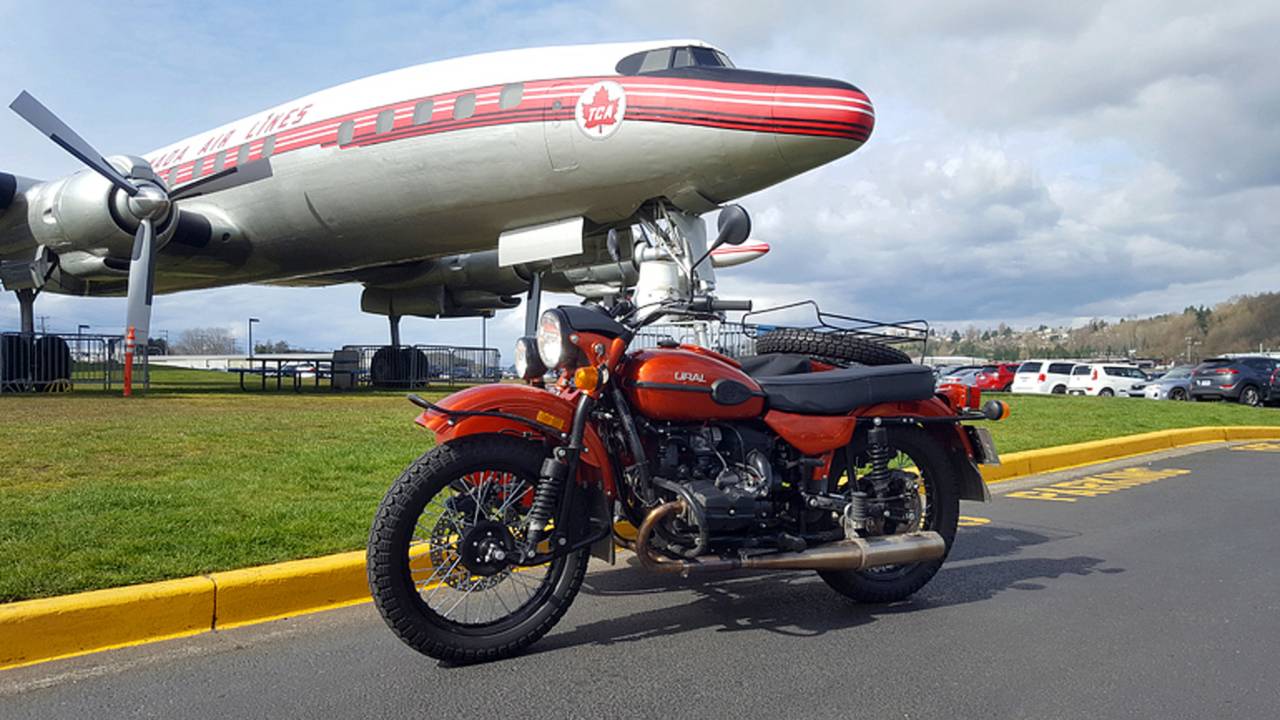 In part two of his Seattle adventure, Jason takes the Ural up a mountain, down a valley, and into the city to find the best airplane museum in the west.

This time Jason actually rides the Ural and hilarity ensues

In part 1, I told you about how I got into this Ural situation and regaled you with some stories of my flight and my first few hours with Ural. Today you get to hear all about the actual ride, how I liked the bike, and how I learned to live with its charming quirks. Let's pick back up in the parking lot where Jason took me to learn about riding sidecars!

I WOULD LIKE: Twenty-Four Hours in Seattle with a Ural - Part 1

After about a half an hour dicking around in the parking lot, learning to steer, and practicing flying the sidecar, we headed back to HQ so I could drop Jason off. Once there we discussed options for the ride, and I decided on a bit of twisty back road action followed by some city exploration. I had some ideas about good photo ops and I wanted to see some of Seattle. Ultimately my route would take me from HQ up the mountain to Snoqualmie Falls, down into Seattle to the Museum of Flight, across town to the waterfront and the docks, then back to HQ to drop off the bike. A pretty ambitious plan considering I only had seven hours and I'd never even been to Seattle before. With the route programmed into my phone I got back into my riding gear, threw on a Buck Owens and the Bakersfield Sound playlist for some traveling music, and hit the road.

Have any of you guys ever piloted a sidecar rig? If not, the first step is to forget everything you know about riding a motorcycle.

All that skill and muscle memory you've built up? Forget it, it can't help you here. Everything about sidecar riding is counter-intuitive and weird and mildly frustrating and I loved it from the start. For one, there's no counter steering. To turn the bike you actually have to work at it, rowing the handlebars back and forth where you want it to go.

Leaning doesn't work the way you think either. To turn right, you have to lean way forward and out over the sidecar. If you turn too fast or too tight, the sidecar'll come off the ground which is, honestly, not as scary as it sounds. To turn left, you lean out and back. Turn in too tight and the bike'll dive and lift the rear wheel. That's the scary part. Keeping the sidecar on track also takes constant input on the part of the rider. Not a lot mind you, but enough that you're always nudging the handlebars this way and that to keep it on track.

The last major thing to watch out for when rocking a sidecar is that under heavy braking—or if, like me, you don't match your revs while downshifting a couple times—the bike hooks hard to the left. Take off too fast or get into the throttle too much and it pulls to the right. That's the sidecar doing that—or, more specifically, the sidecar's momentum—and it's called the yaw effect. It's also scary as hell the first time it happens to you, especially if you're not ready for it. I wasn't ready for it, but it only took me one time of not matching revs and having the whole rig almost jump into oncoming traffic to make me very aware of it for the rest of the ride. By the way, this isn't a problem with Urals or this particular bike, it's a quirk of all sidecar rigs. The more you know!

Anyway, the first leg of my trip I took the extremely scenic State Route 202 from Redmond to Fall City. Clouds had moved in and it was alternating misty and windy, but the Ural never missed a beat. Once I got used to the handling vagaries caused by the sidecar, I found it more than able to handle the hills and curves of 202. I took my sweet time, easing into the corners and getting to know the bike, and eventually made it to my first stop.

The Fall City Roadhouse and Inn

Fall City's a rustic little burg right on the Snoqualmie River that looks like something out of, say, Northern Exposure or Twin Peaks. It has a cute little main street lined with shops and bars and, speaking of Twin Peaks, a historic hotel called the Fall City Roadhouse and Inn. Since it looked so inviting, I decided to have lunch and grab a cup of coffee to warm up a bit and jot down some notes. After a killer plate of fancy macaroni and cheese with chicken and sauteed red onions and a few cups of pretty excellent coffee, I was on to the next leg of my trip—up the mountain to the falls.

This part of the trip was pretty grueling, but that's as much on me as it is on the bike. The steep grade and tight corners were extremely challenging, especially for someone like me who wasn't used to a sidecar's handling. I took this part real slow, much to the chagrin of everyone behind me, but I finally made it to the falls where I discovered that my plan for taking a picture of the bike in front of the falls wasn't going to work. See, there's no road access to the falls, you gotta park and walk down a hill to see it. Since I'm not that much of a nature person, and since I've seen waterfalls before, I decided to skip it and just headed for Seattle.

I took 202 down the other side of the mountain to I-90 and hopped on the freeway for a high-speed run into the city. I'll be honest with you, this was my least favorite part of the trip. While you can ride a Ural at 65-70 miles an hour—in fact, that's where the laid-back boxer does some of its best work—I'm not sure I'd recommend it. Not for long distances at any rate. Maybe it was because I didn't have a windshield, or maybe because I was still learning the ins and outs of the bike, or, hell, maybe because I'm still carrying a bunch of beer and Girl Scout cookie weight and my jacket was too tight, but I was miserable on the freeway. It was only about a 20 mile ride, but it felt like literally a million miles. Every exit I approached I was sorely tempted to hop off the superslab and find a different way into Seattle on a twisty two-lane.

After a good 40 minutes on the freeway, including a stretch of stop-and-go during which I got a good look at some of Seattle's numerous tent cities, I finally made it to the Museum of Flight. Unfortunately, since I'd overstayed my time in Falls City, I had, like, zero time at the Museum. I knew that if I went in I'd never come out again, so I spent a few minutes admiring the Trans-Canada Airways Super Constellation you see up there in the lead image (Super Connie best Connie) and getting some good shots. Hilariously enough, in the far corner of the parking lot was an extremely ratty MiG-17 that used to belong to the Jordanian Air Force. As soon as I saw it I knew I had to get a picture with the Ural. How could I not? It was also during this time that I finally experienced what they call "Ural Delay Factor".

Ural Delay Factor is the phenomenon where everything takes at least 30 minutes longer than it should when you're out on a Ural. That's not because the bike's slow or broke down or something, it's because people won't stop bothering you about the bike. At least three different groups of adults approached me while I was shooting the bike in front of the Connie, and no fewer than six children wanted to sit on it. In addition, people kept slow rolling past me and either taking pictures or just giving me the thumbs up. Now, I'm not complaining, but it was weird getting all that attention.

Once I was done shooting pictures in the parking lot, I headed into the city proper to get some pictures on the waterfront. The following 30 minutes involved me hopping on and off I-99, getting lost a couple times, getting hung up in heavy traffic driving through tourist hellhole lovely and picturesque Pike Place Market, and generally wandering around aimlessly looking for a good shot. I finally found a decent enough shot for the bike with some harbor cranes in the background, so I pulled over next to some Seattle local color and snapped some pictures. By this point it was after 16:00 and I needed to get the hell out of Dodge if I wanted to make it back to HQ by the appointed hour. So I said goodbye to downtown Seattle, hopped on the freeway, and headed back to Redmond.

Some of the aforementioned local Seattle color. The owner was renovating and listening to Jethro Tull while I was there. Peep that Valiant!

The rest of the afternoon/evening consisted of me returning the bike and hanging out with Madina some more, getting some good pictures in the warehouse, eating dinner at the delightful Mox Boaring House, and finally falling asleep with my boots on at around 22:00. Thank god my alarm was still set and I'd already scheduled a Lyft, 'cause I needed to be at SeaTac bright and early for my 08:00 flight. Eventually, after an excruciating wait on the taxiway, I was in the air and Detroit bound.

My 36 or so hours in Seattle were pretty magical. It was great meeting Madina and Jason and the rest of the folks from Ural, and I can't thank them enough for their generosity and hospitality. As for the Gear Up, well, what can I say? It was an absolute riot. I loved riding it and, if I'm honest, I looked great doing so. The trunk was super convenient, the instrumentation was clear and readable, everything was easy to use, it was pretty comfy overall, and I found it a very pleasant and enjoyable companion.

Sergei's tidy workstation. I took a moment to sing both America the Beautiful and Gosudárstvennyy gimn Rossíyskoy Federátsii while I was there.

Realtalk though, Ural has come a long, long way in the production quality department. Even over the past five years the fit and finish of these bikes has improved leaps and bounds. Madina told me all about how hard they're all working to improve production and make a really world-class bike, and the proof is in the pudding, as it were. My biggest complaints about the Gear Up are that I couldn't figure out a good place for my right foot that wasn't the top of the pipe (I'm too used to the pegs on my XS850 which are placed differently) and that the placement of the brake, shifter, and reverse lever could be a little more spacious. Well, that and I would have given my left arm for some self-cancelling turn signals. Oh, and it desperately needs a tach.

That's pretty good for a bike that's been a motorcycling punchline in the West, fairly or unfairly, for nearly its whole existence.

I'd say, especially if you keep in mind what it is and what it isn't. The Gear Up is a laid-back, torquey, unhurried cruiser with some pretty respectable off-road bona fides. It's neither a sportbike nor a grand touring machine like a Gold Wing. It's a quirky, very cool, deeply satisfying throwback that'll carry a ton of luggage and a couple passengers with ease. It won't get you there in a hurry, but it'll definitely get you there in style.