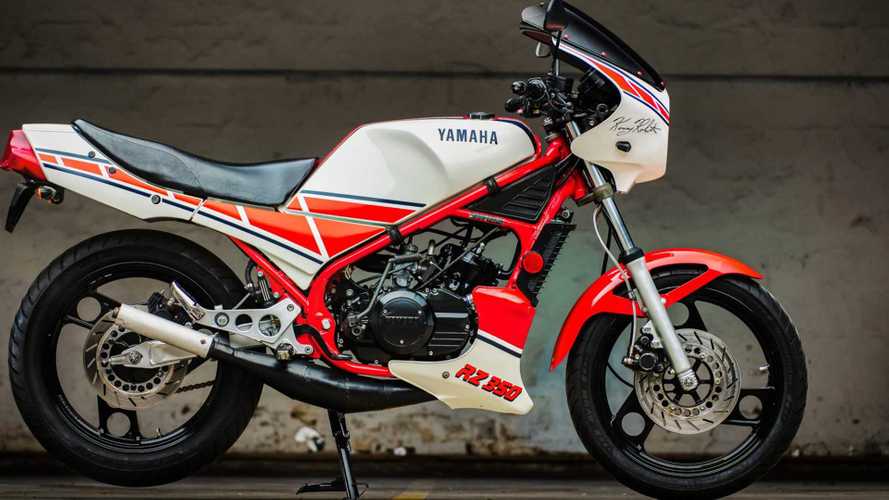 This ring-dinger was a fast, fun bike for street or track.

The Yamaha RZ350 was one of the most successful club racing bikes of the 1980s, and offered incredible bang-for-buck performance on the street. It was also, sadly, an evolutionary dead end. Yamaha hasn’t sold anything like this in the U.S. for around 30 years, so if you want one, you’ll have to buy used. Good thing there’s a 1985 RZ350 for sale on Bring a Trailer, and it’s even a Kenny Roberts edition!

The RZ350 was a sporty street bike, sort of the natural continuation of the RD350 line into the 1980s. It had a liquid-cooled, two-stroke, rubber-mounted parallel twin engine mated to a six-speed gearbox. The engine was also equipped with a variable-height exhaust port that was supposed to broaden the powerband.

When it debuted, the RZ350 was rated for 52 horsepower at 8,750 rpm, that’s better than many of today's crop of 400-class four stroke sportbikes. In the 1980s, that was excellent performance for a 350-class machine, making it well worthy of the Kenny Roberts badging. At the time, King Kenny had just wrapped up his MotoGP career, but was still appearing in one-off races, and his endorsement was a big deal. He was the face of American racing success.

This ‘85 would have been the first year for the RZ in the U.S. (a few machines made it in earlier, but with very limited distribution). It was the first motorcycle in the U.S. with a perimeter frame, and the first with a catalytic converter, to scrub its tailpipe emissions.

The RZ was very popular with club racers, but it didn’t last long in the American market. Yamaha canceled it in ‘86 because dealing with environmental regulations wasn’t worth the hassle. It was sold all over the rest of the world, though, so if you want parts they’re still out there.

If you win the auction for this particular machine, you might want to buy some parts. The bike is mostly there in all its ‘80s glory, with an attractive bikini fairing and belly pan, conventional telescopic fork and monoshock, and weird 18-inch wheels. However, the ad says the bike’s autolube system has been removed, so you’ll have to run pre-mix fuel. As well, the Yamaha Power Valve system, which was supposed to even out power delivery, was removed, meaning horsepower will be peaky. There’s a set of aftermarket expansion chambers on the exhaust, and the stock airbox is swapped out for a K&N air filter. The engine cylinders have been bored .5mm over stock.

This isn’t a stock machine, and judging by the mods, there’s a very good chance it’s been around the track a few times. If you want the latest and greatest of the Yamaha two-strokes, though—this is it. Bid now, or forever hold your peace.