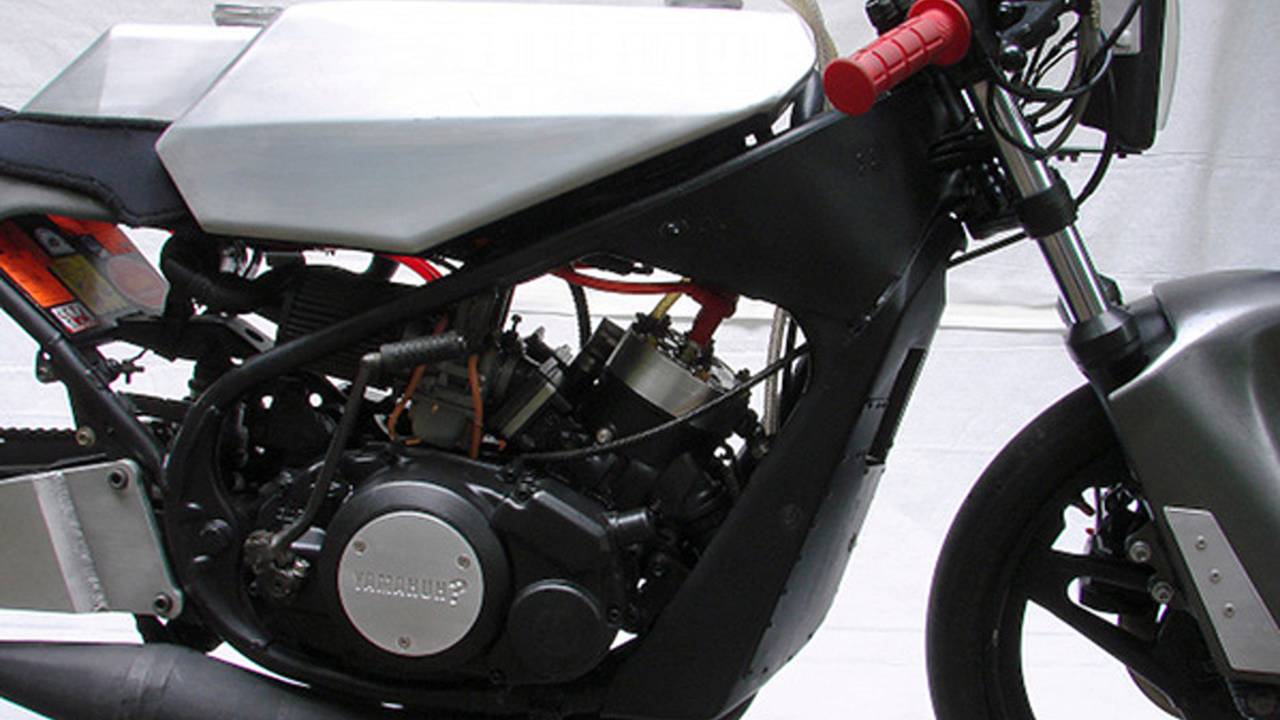 Could an old two-stroke that still holds land speed records in the 350cc class be converted to practical transportation for the street?

Could an old two-stroke that still holds land speed records in the 350cc class be converted to practical transportation for the street? Well, it did start life as a street-legal motorcycle, so titles and registration are just a quick trip to the DMV away. At least they were for Seattle’s Eric Levine, who ditched the total loss electrics, wired up a couple lights and took to the street on this heavily modified Yamaha RZ350.

“I originally built the bike in late ‘80s from a thrashed, stock 1985 Yamaha RZ and ran it at the speed trials at El Mirage dry lake in California and at the Bonneville salt flats in Utah,” says Eric. “It got a few land speed records and still holds one at 146mph (350cc unfaired class). I put it in in storage in 1997.”

“After 14 years in a leaky shed in San Diego, I got it out in February cleaned it up, did some mods (like lowering the gearing) and converted it to a weird street machine.”

“I ran with a contrived team called ‘Twist-Off Racing.’ A term coined be a fellow racer that both referred to the futile attempt to twist the WOT off the bike and also made reference to the beverages at the after-race celebration. We had our own team box van with a hydraulic lift gate for the bikes. At one point we had about eight El Mirage and Bonneville records with this RZ and an heavily modified FZR600 that I don’t think exists any more. The team was Eric LeVine, Mike Senn, David Dastrup, Ray Taylor, and crew chief Ken Bickel. We even had a crazy write up in Details Magazine and in some Japanese bike mags in the ‘90s.”

“Have never dyno’d the bike, but by my estimations it is making over 75 horsepower in a tiny power band between 8,000 and 10,000rpm. The mods are Yamaha Banshee cylinders with really opened-up porting for maximum power, even sacrificing powerband width. I massaged the ports and thinned out the webs between all of the transfer ports and precisely matched the transfer ports to the enlarged case ports and had custom gaskets made as to not impeded the flow from the crankcase into the cylinder. The head is a product from ProDesigns made for a Yamaha Banshee quad. It has interchangeable combustion chambers. I used the maximum squish/lowest volume combustion chambers they offered to increase the compression. The bottom end is basically stock Yamaha RZ with the crankshaft welded to prevent separation at high load/rpm. All of this while strictly maintaining 350cc displacement to be legal in the class. I sometimes ran Wiseco pistons, but had the best luck with stock Yamaha RZ 350 pistons.”

“It has 36mm (or are they 38?) Lectron Powerjet flatslide carburetors. Those Lectrons were the trick set up at the time and Don Vesco Racing helped me set them up. TZ 350 intake manifolds were used to accept the big carbs and were modified to match the cylinder intake bolt pattern, Trinity Racing reed spacers and TDR reeds are on it. Ran SCTA-supplied VP and ERC race gas with Yamalube R premix oil at 44:1 ratio. The pipes were custom made by Rob North using some old patterns from Don Vesco. I ran EGT (exhaust gas temperature) gauges in the header pipes. If the gas temp got over 1100F on a run, I shut down to sort out the problem. Usually a lean cylinder for some reason. This is important when running a two stroke at wide open throttle under full load for about 30 seconds. Pistons melt real fast.”

“Transmission is stock because, in speed trials, the tranny doesn’t get slammed around much. The shifting is very deliberate. I left the 6th gear in the bike but never used it. It is an overdrive and bogged the motor. So I geared the bike for max speed in 5th. That meant I had to increase the final drive ratio dramatically. My cousin (Peter Harris, a great machinist/engineer) made a custom 20-tooth countershaft sprocket. That allowed me to tune the rear sprocket gearing to the conditions (air temp, freshness of motor, tail wind, humidity, etc) and just use 5th as top gear. I recalibrated the stock neutral light to light-up when I reached 5th (because sometimes when I was going over 145 on wet salt, in a crosswind, I lost track of my gear count). Peter Harris also made the crazy long rear sets, to my specs on his CNC mill.”

“Clutch is heavy duty Barnett with stiffest available springs. The water pump is gone. The oil pump is gone (premix).”

“The big tank is coolant. When raced, it had no radiator for aerodynamics so I pumped coolant with an electric water pump through the tank. It had enough water to get the bike through a run and raise the water temp to about 150F. I used the electric pump as to not burden the engine with the water pump impeller sucking power. The small tank is 1.5 gallons of fuel. These tanks were fabricated by a friend, NHRA alcohol dragster racer Mendy Fry.”

“The front end was raked-out and the swingarm extended by Motorcycle Dynamics in Escondido, CA. Seat is AirTech TZ 250  model.”

“I also tuned the riding position for max aerodynamics. Bikes are notoriously dirty aerodynamically so we tried every little thing to get the bike and the rider cleaner. At the time (early ‘90s) there were lots of rules for unfaired bikes about streamlining. This funky front fender was essentially a loophole that I exploited. It is a fender, not a fairing, and did not protrude side-to-side far enough to shield the rider from the wind. It seemed to work well. Now the rules do not allow any device that attempts to direct air around the bike or rider, unless running in the streamlined class. It also has a skinny Goodyear drag racing front tire to lessen the frontal area, and reduce rolling friction. I ran the fastest with low tire pressure in the rear, like 19 lbs. That was an experiment, I mean mistake.”

“These were all experimental attempts to gain another MPH. That is the beauty of LSR. It is pure, amateur, and promotes ingenuity. Just like that movie ‘World’s Fastest Indian’ it’s about trial and error, learning from others, speed, noise, and the fun of it all.”

“To get it street legal, I dug through piles of electrical detritus and located the voltage regulator and some other necessary parts to get the charging system working again, to actually charge the battery, rather than total loss electrics. Mounted head and tail lights, I made the turn signals from acrylic rods and flashing orange LEDs from eBay. Took the title to the DMV paid $80, and got a new title and plates (it did start life as a street legal bike, after all). Mounted a horn. The speedo is a little bicycle unit with a magnet mounted to the rim. It’s accurate. The big gauge is a tachometer from an ultralight aircraft company. It has nice big digital readout.”

“The ergonomics are uncomfortable on the street, too much pressure on the hands (because I’m not laying on the tank while riding on the street). I am going to try some “cheater” pegs that mount at about at the stock position for an occasional rest while putting through neighborhoods at 40mph. Also, the bike has no neutral gear, so holding the stiff clutch lever at stop lights is not fun.”

“It’s super quick, pipey, loud, uncomfortable and stinky. And that's the way I like it. No tickets yet.”