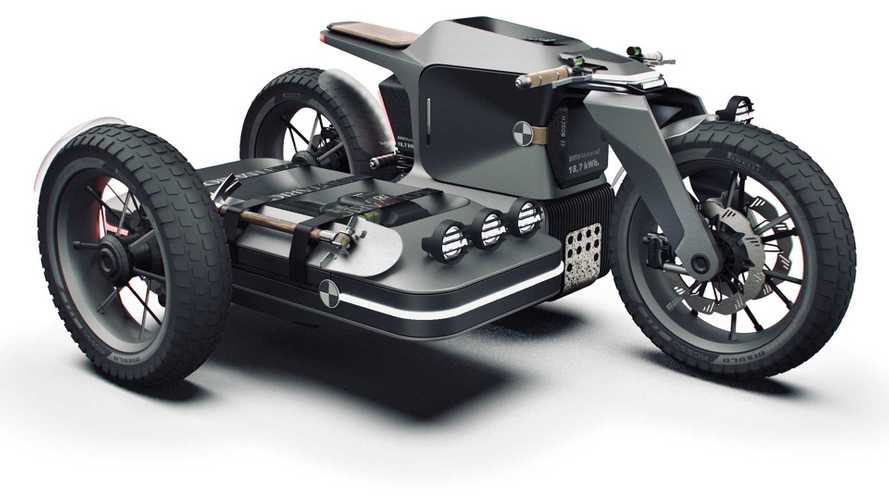 Electric motorcycle design, by and large, is an exciting thing to watch as it evolves over time. It’s not just the novelty of so many people coming up with electric bike designs at once, either. No, the thing about electric bikes is that they don’t feature many of the same design constraints that combustion bikes do. There are only so many ways to configure and place an engine, and it’s generally going to be a pretty large piece of your design.

Don’t get me wrong; I love engines, but it’s also cool to see something completely different to the first images that typically spring to mind when someone says the word ‘motorcycle’ to us. Also, although I love a good vintage or even retro-themed modern bike as much as the next person, I also appreciate seeing the future through industrial design. That, my friends, is where the best electric motorcycle concepts are also the most exciting.

In Other Concept News:

Take this 3D rendering of a BMW Motorrad x ESMC off-road adventure e-motorcycle, complete with sidecar. Created by design student Iago Valiño, this 3D design render depicts a sidecar, but neatly sidesteps the sepia-toned retro-gazing that so often accompanies such designs. Instead, what we see is the electric future we were promised, and it is glorious.

The PIAA LED rally lights on the front of the sidecar tell you this bike means business. Wide, knobby tires on all three wheels emphasize how ready this sidecar rig is for all terrain. If you had any doubts that it’s a workhorse, the extra straps over the sidecar were specifically designed to hold all your tools, such as shovels, axes, or other hand implements with long handles. Cargo or a passenger could also ride in that sidecar, as well. Your call. Can this thing fly? LOL no, it isn’t magic, it’s just electric. There’s an extra battery built into the sidecar, too, which should help extend this rig’s range.

Since it’s just a concept render, and is nowhere near any type of production at any level, there are no specs available. We’d love to see this thing actually built, though. I don’t know about you, but this kind of thing is exactly what I want out of electric motorcycle design. This is where I want to see it go, and where I hope Iago Valiño and other designers will pull us as we move forward.