This 1975 Norton Commando 850 Mark III Has The Modern Touch 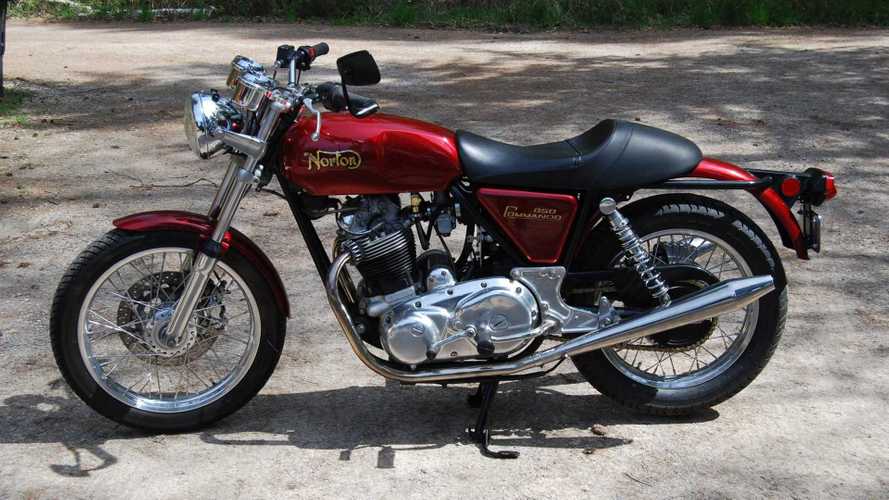 It's the ultimate evolution of a quintessential British bike.

One of the most iconic motorcycles to ever come out of the British Isles was the Norton Commando. While the first models were infamous for their weak frames, by the time the Mark III version came out in 1975 they'd worked out the bugs of the earlier models. It also increased the engine displacement from 750 to 850cc, as well as moved the gearshift to the left and rear brake to the right as now required by US law (British bikes typically had these reversed in the past). This particular example is for sale on Bring a Trailer and includes a few hidden tricks, such as electric start.

The bike recently had a complete restoration, plus a few minor upgrades while they were at it. The entire bike was disassembled. The frame, swing arm, engine plates, and all related metal components were powder coated according to the methods recommended on the Old Britts website. The bright red paint is new, including the gold "Norton" lettering on the gas tank. Yes, that's paint, not stick-on badge or a decal. Some of the exterior parts have been replaced with older parts from the Mark II Commando, both for looks as well as reliability, as the Mark III anti-sump valve has reliability issues.

Despite the bike's gorgeous classic looks, it would be more accurate to describe its restoration as a "resto-mod." The engine is the original numbers-matching unit, but it has been totally rebuilt. Complete details are available in the seller's comment in the posting, but highlights include a .020 bore, a Megacycle 560 NR camshaft, and a single 36 mm Mikuni carburetor. Wiring is a huge Achilles heel of old British bikes, and this one has been completely rewired and upgraded to six fused circuits, rather than the original single fuse for the entire bike. It has also been converted to a standard negative ground system instead of the original positive ground. Those eccentric Brits.

There are only two glaring modern upgrades on the bike. One of them is an electric starter. Yes, this Norton will easily start with a flick of the switch instead of a kick or two or twenty. The other modern concession is a pair of white-face Colorado Norton Works gauges since the original Veglia gauges (included) failed years ago. While the current mileage is unknown, it's thought to be less than 5,000. An oil pressure gauge has also been added because despite the excellent quality of this build, you just never know when an old British bike is going to spring a leak.

All in all, this Commando is the ultimate best of the modern and classic worlds. It has the right looks and provides a genuine classic riding experience, except with modern reliability and ease of use. Some would say that the added reliability ruins the classic experience, but this bike would be perfect for someone who wants to own the ultimate British motorcycle without all of the hassles usually associated with one.