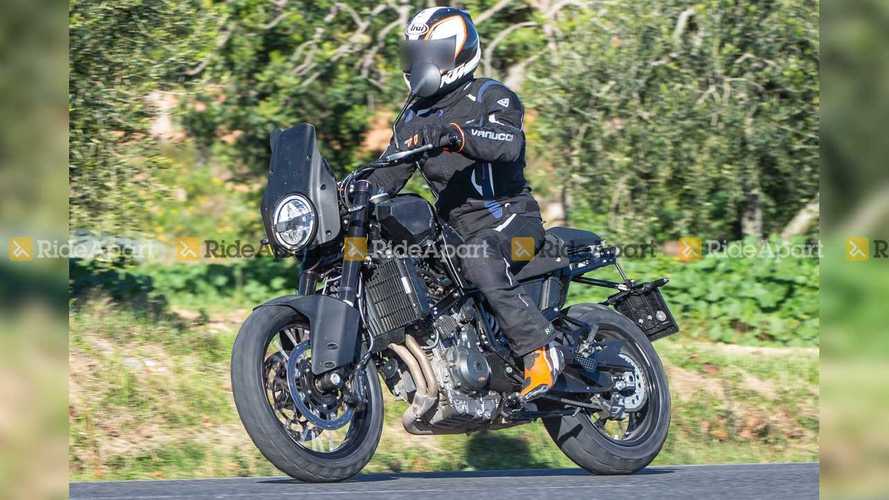 Husqvarna is moving up in the world, specifically in size. We previously reported on two new models using a twin engine rather than Husky's traditional singles. While we already had video of what we suspected to be the Svartpilen variant, we now have some still photos that reveal some more detail about Husky's new twin.

We now know that one of these new models is the Norden 901 ADV bike. The other is, indeed, a 901 Svartpilen, adding to the existing 401 and 701 models. While the Norden's engine is covered by bodywork, the naked Svartpilen reveals where this new twin likely came from: parent company KTM.

The two exhaust pipes coming down the front of the engine confirm that this is definitely a twin, not a single like Husky's smaller models. We'd already guessed that. It's the side view that really gives away this engine's KTM roots.

Look at the new 890 Duke R, and the engine's swerves, curves, and contours are identical to the 901 Svartpilen's powerplant as seen in these photos. Stare and compare for yourself in the photo gallery below. This part sharing is in no way a bad thing. We know that KTM claims this engine produces a claimed 121 horsepower at 9,250 RPM and 99Nm (or 73 ft-lbs) of torque at 7,750 RPM. These numbers may vary in the Svartpilen, depending on how Husky tunes it to differentiate it from the KTM, but they will definitely blow the 701's 75 horsepower and 72Nm (or 55 ft-lbs) out of the water.

Aside from the engine, we still don't know a lot of specifics about this bike. Its stripped-down appearance is rather unlike the rest of its Svartpilen family, but that could be on purpose so that prying eyes like ours won't know its final form until Husqvarna wants us to. Based on what we've seen so far, I'm looking forward to it.