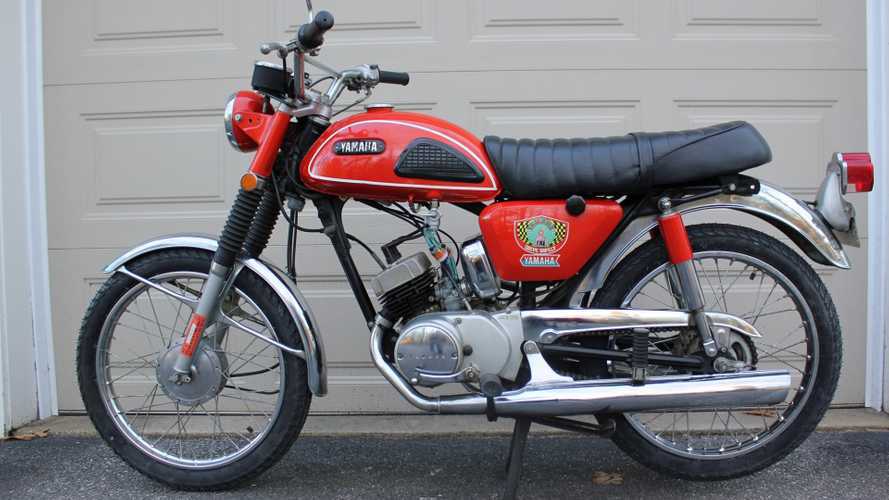 Want a vintage two-smoker that's had an easy life?

For some reason, Yamaha’s earlier machines don’t get the same name recognition as vintage Hondas (with the possible exception of the XS650 line). That doesn’t mean they weren’t important in the history of motorcycling, though, and it doesn’t mean they’re undesirable. Just the opposite, in fact. Because there’s less hype over vintage Yamahammers, you might actually find a good deal on one.

Need proof? Check out this 1970 Yamaha HS1, for sale in New Hampshire. This two-smoker was built with a 90cc engine to get around the Japanese domestic market’s 100cc restrictions, or so the rumor goes. That might have endeared it to buyers in its home country, but in power-mad North America, a 90cc wasn’t the stuff of dreams for most riders. As a result, while Honda’s CB750 went down in legend as the world’s first Japanese superbike, this HS1 spent its days as part of a dealership collection.

Vintage Machines On The Auction Block:

The tiny, mighty HS1 is powered by an air-cooled, 90cc, two-stroke parallel twin that breathes in through a pair of the smallest carburetors you’ve ever seen and out through a two-into-two exhaust. The engine is mated to a five-speed trans that delivers power to the rear wheel via a chain final drive. The suspension is pretty standard—forks at the front and two shocks aft—and the brakes are drums front and rear. This bike’s ad claims the machine was rated for 10 horsepower—not that you’re going to be buying this for drag strip runs or highway commuting.

This particular example does appear to have lived an easy life, and it seems the dealership did a basic freshening-up before it went on the market. The ad says the carbs were cleaned, and the intake and breather hoses replaced. The odometer only shows 3,000 miles; visually, it’s obvious the bike has been used, but it appears to have been well taken care of. The ad also says the current seller, who bought it from the dealership collection, has ridden it, so it should be in running order, more or less.

Best of all? The price is $1,000 at the time of posting. No doubt it’ll rise in the days ahead, but this is a vintage machine, in good condition, that almost anyone can afford. The classic motorcycle scene has seen quick rises in pricing lately, but for now, a clean machine like this is still within most riders’ reach.