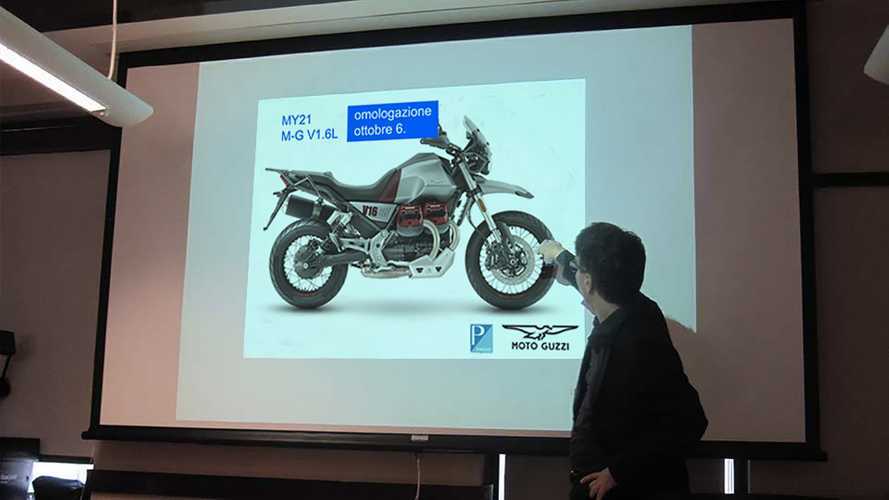 In 2019, Moto Guzzi returned to the ADV segment with a bang when it launched the Stelvio’s replacement, the V85 TT. We liked it, everybody else did as well, and just like that, the model became Guzzi’s best seller, leading the sales offense throughout the year.

For 2020, the manufacturer built on that momentum by introducing a more touring-oriented version of the model, the V85 TT Travel. Now, it seems like Moto Guzzi is about to take things a step further as rumors of a V16 now surface.

A reader reached out to us today with a picture that was seemingly snapped during a Piaggio presentation.The picture show the projection of a render of what seems to be a V85 equipped with a 1,600cc, V4 engine. Aesthetically, the model is virtually identical to the existing one—except for the two cylinder heads poking out of its right side.

Our reader mentioned in his e-mail that his friend who works at Bosch took the picture a little while back, asking us whether we had heard anything about it. We hadn’t but we now we have and we want to know more! Consider us interested, Guzzi.

Considering V4 engines are gaining in popularity on the market and that Moto Guzzi’s sister brand, Aprilia, already produces one, it’s not so farfetched for the Goose to follow the trend. While the other V4s on the market have found sportier applications, it could make sense for the House of Mandello del Lario to introduce its version of a V4 via its most successful model.

The downside we see to this potential new model is that it will likely be heavy, with the mid-size V85 already tipping the scales at over 500 pounds. If the company takes the same touring route as it did with the V85 TT Travel, then the idea has a lot of potential.

Until now, the biggest engine currently available in the Italian family was the 1,380cc so this could open a new door for the brand. According to the slide, the “V16” should be homologated on October 6, 2020 and is expected to launch as a 2021 model.