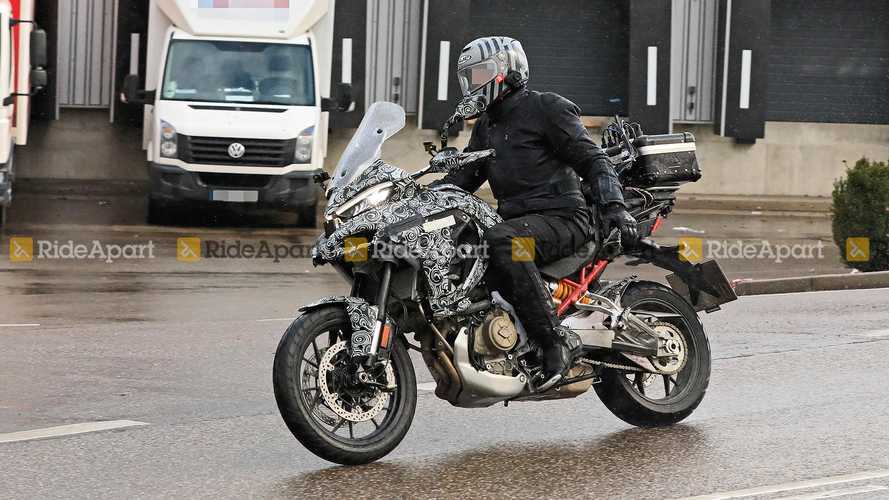 Ducati is getting ready to complete its trio of V4 models. We already knew a Multistrada V4 was in the works. Between the bike’s first spotted out and about on the Italian roads last summer and Ducati CEO Claudio Domenicali’s candid admission that the new V4 powertrain would makes its way in the Multistrada, the table was set. It wasn’t a matter of “if” anymore but rather a matter of “when”. The answer to this could be sooner rather than later.

The Multistrada V4 test mule was spotted in action once again, this time clad in full camo. The spy shots reveal a few clues about the future model’s set up, including the exposed bright red trellis subframe—absent on the Multistrada 950 and 1260—as well as the shorter swingarm which could also suggest a shorter wheelbase. At the front, the shape of the headlights is slightly altered and the air ducts on the nose are set wider apart. From the side, the fairing doesn’t look as chunky as on the flagship thanks to an opening on the flanks.

The test mule is equipped with an inverted fork and a single, offset shock at the back, as well as Brembo brakes paired with the ABS. Instead of the wheel-mounted rear fender, the rear fender on the prototype is attached to the subframe. This is what we’re able to observe on the bike for now but there’s a lot more to come as Ducati will likely enter the stages of teasing like it did with the Streetfighter last year.

According to Domenicali’s statement regarding the Multistrada V4, the new model will be an addition to the sport-touring lineup rather than a replacement. After all, the V4 is a 1,103cc block which positions it almost perfectly in the middle of the lineup, between the 937cc and 1,262cc options.

Chances are we’ll see the new Ducati Multistrada V4 make its debut before the end of the year, possibly at Ducati’s yearly event usually scheduled ahead of EICMA or maybe even earlier.