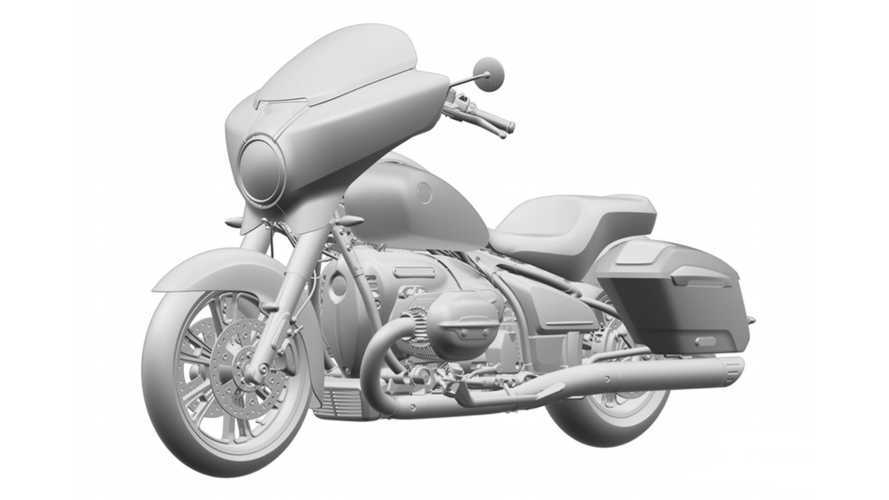 Our eagle-eyed colleagues at Motor1 Brasil spotted these official 2021 BMW R18 design registrations earlier today—and one bike here looks very much like the production R18 we already know and love. Keep in mind that while the production R18 was finally unveiled at EICMA 2019, BMW’s bigger presentation at that event involved another future bike in the line, the Concept R18 /2.

Within these designs, there’s more than just the production R18 we already know about, though. Scroll through and you’ll see some new designs for what looks like an as-yet-unannounced member of the R18 family. This one clearly looks like a big touring bike that also makes use of BMW’s 1800cc air-cooled boxer behemoth.

This tourer looks nothing like either the R18 or the Concept R18 /2 that BMW has previously shown. The hard panniers put me in mind a bit of the K 1600 B in their swept-back lines, but they’re definitely veering more toward a classic American cruiser look, rather than a gigantic sport-tourer.

It’s honestly no surprise that BMW would make a big American-style tourer like this a member of the R18 family, especially considering the previous two designs that it’s unveiled. In fact, it was probably inevitable. First, you get a big ol’ bobber, then you get a slightly sportier-looking giant cruiser, and then you get a nice, big tourer so you can comfortably take your important stuff with you on longer journeys. Presumably, there will be passenger accommodations available as accessories for this model, as well.

The tourer R18 variant seems to share the same (or at least very similar) straight-shot dual exhaust on either side as the Concept R18 /2, rather than the somewhat more piscatorial, curvy dual exhaust seen on the production R18. It adds a big-winged touring fairing with a windscreen that looks like it would work well at shielding riders. Big alloy rims that resemble the ones seen on the Concept R18 /2 are in position here, as opposed to the spoked wheels of the production R18.

You probably suspected something like this was coming—and now that we’re getting our first glimpse of what it’s going to look like, what do you think? We look forward to finding out new details about this model as they become available.