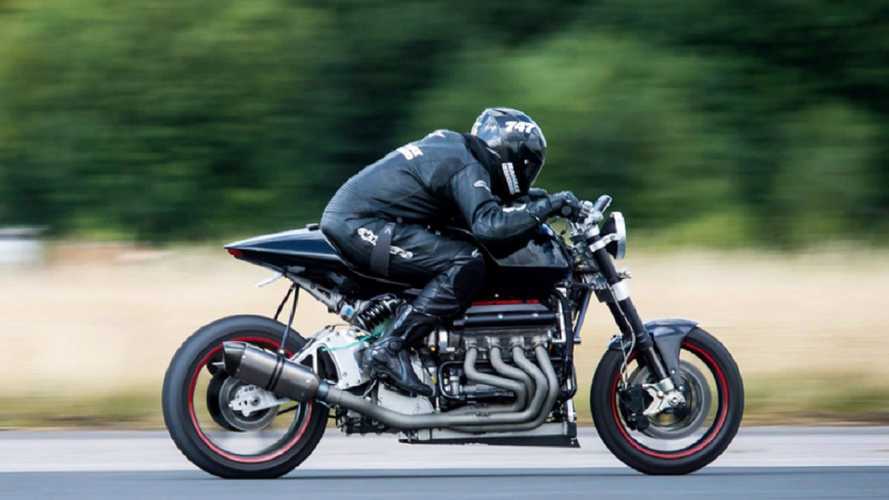 What could go wrong?

In today’s episode of “Holy heck are you serious?” we bring you the exciting news that Eisenberg is taking orders for a 3.0 liter (183 cubic inch), 480+ horsepower, V8-powered motorcycle. Zef Eisenberg is best known for his range of dietary supplements and cabinet full of land-speed records. He is also somewhat of a mad scientist when it comes to motorcycle builds. This one is his most insane project to date.

The Definition Of Crazy:

According to Motorcycle News, the jaw-dropping engine is the result of an unholy matrimony between two Hayabusa units, squished together with a flatplane crankshaft. Eisenberg says the motor revs freely to 10,500 rpm and if you feed it race fuel there’s a possible 500 hp on tap.

Despite the hulking great engine. the Eisenberg V8 has a relatively small 1,650-mm (65inch) wheelbase and weighs in at 641 pounds ready to ride. When you consider the powerplant alone is 176 lb, and that it weighs less than a Triumph Rocket III, the number is impressive.

With a maximum speed of 225 mph and all that weight, the Eisenberg needs some serious anchors. Twin six-piston calipers from Brembo will provide stopping power up front with a four-piston caliper squeezing a single disc out back. A fully custom aluminum, anti-squat swingarm was designed to minimize chain flex, which allows Eisenberg to run a 530-pitch chain instead of a heavier unit. Power is delivered via a six-speed GP-style gearbox with swappable cogs, which seems pointless given the prodigious amount of grunt on offer from this motor.

UK motorsport giants Prodrive will help Eisenberg with the final stages of regulatory approval, before a limited number of road-going V8s will be delivered to the public. Orders are already being taken, with a final price somewhere north of 120,000 Euro, or $130,000.

The one question that remains then is, “Why?”.
Who cares why? It’s awesome. That’s why.