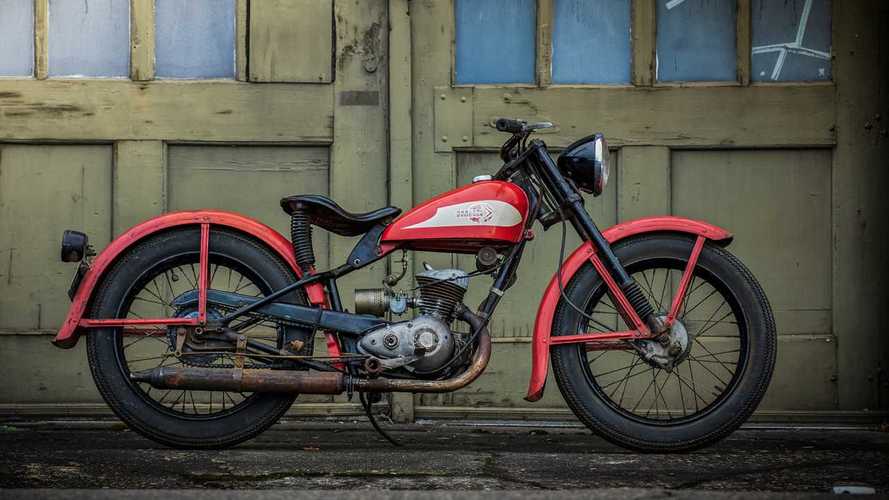 It’s difficult to think of a motorcycle brand with more history and heritage in the United States than Harley- Davidson. They’re still riding a wave of nostalgia, for better or for worse, but before the TV shows and clothing lines, they were just a motorcycle manufacturer churning out simple machines like this 1959 Hummer 125. This particular bike was on the popular auction site Bring A Trailer, where some lucky sod scooped it up for the bargain price of $7,000.

The Hummer 125 is based off of a two-stroke German motorcycle, the DKW RT125. After the Second World War, the DKW’s patents were offered up to the various Allied nations. It became a Harley-Davidson in America, a BSA in England, and an MMZ in the Soviet Union. The Hummer specifically was a stripped-down version of the already barebones 125, designed to compete against the cheaper Japanese bikes.

In an effort to cut costs, Harley-Davidson removed everything not 100-percent essential. There is no speedometer or battery or horn or mirrors or turn signals or even a brake light. Although this one appears to have had a brake light added. Probably a wise modification. You get a sprung seat, no rear suspension, an engine, and you’ll be happy about it.

This particular bike recently had a full engine rebuild with original OEM parts. The paint is also original and unrestored, which is shocking considering the condition it is in. Sure, there’s some patina and the fenders show some mild rust, but the tank doesn’t look that much worse than mine, and mine is 47 years younger. Maybe I should take better care of my paint.

So for the price of a mystery Craiglist GSX-R, someone picked up a genuine running and riding piece of American history. The previous owner put 3,000 miles on it in 15 years, which isn’t a lot, but that still means that someone took this thing out on the road, for at least a few hundred miles a year instead of letting it mummify under 30 pounds of wax. Here’s hoping that it picks up another few thousand more.