This Custom Kawasaki Is A Vision In Lime Green 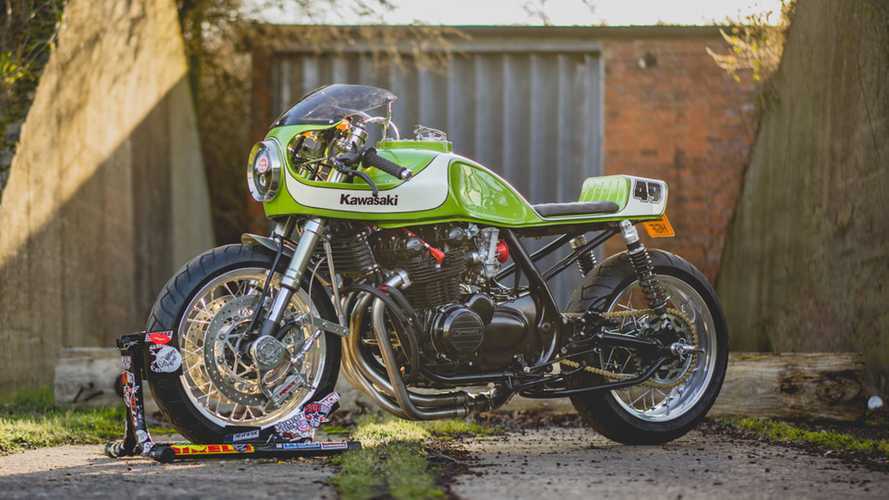 A Zephyr worthy of the name.

It’s no secret that the vintage look is hotter than ever. It seems like everyone, OEM and custom build alike, is trying to get back to the heyday of 1960s and 1970s design. While those machines certainly looked the business, their performance doesn’t necessarily stack up against modern machines. That’s why you see so many builders, including motorcycle manufacturers themselves, aping the old styles with new hardware.

This Ducati Cafe Racer GT1000 Custom Is Sex On Wheels

Just look at bikes like the BMW R nineT or the Triumph Thruxton, for example. When the big manufacturers get in on a trend, you can guarantee that the custom builders have been heading down that path for quite a long time already. This 1991 Kawasaki Zephyr 750 built by November Customs is a perfect example of a beautiful vintage look draped across the best modern engineering.

The first thing that strikes you—other than that retina-searing paint—is the delicious bubble fairing. The longer you stare at it, the more impressive it becomes. The bodywork is a bonkers hand-formed, all-steel monocoque. That means that the fairing, the tank, and the tail are all one continuous piece of metal. No fiberglass here. The original tank is in there somewhere, but cut, chopped, welded, and reformed within an inch of its life. Oh, and they made a one-off aluminum gas cap while they were at it, because when you’ve gone this far, why stop?

Underneath that luscious bodywork is a ridiculous hodgepodge of parts, a regular United Nations of motorcycle engineering. Up front is mostly Italian, with the front end from a Ducati 848 and the clip-ons from a Ducati 748. Calipers off an Aprilia and Brembo discs carry on the Italian theme, although the wheel and brake discs are both from Triumph. There’s also a custom mechanical anti-dive system tucked in up there, because things were just a little too stock. Out back the weirdness continues with a Honda CB900 swingarm and more Brembo hardware. There’s even a muffler off a BMW S1000R and rearsets off an Aprilia RSV to really round out the mix.

What I love most about this bike is that it gets better the longer you spend with it. At first glance, it’s another retro-inspired racer with a flashy paint job. But the more time you spend poring over the details, the more custom work peeks out at you. None of it is big or flashy, but it’s there. You know how when you’re at a party and someone references your favorite movie, and nobody else gets it but you? This is like that. Most people will just see another retro bike, but the people that know will know. You get all of the style and flavor of the glory days, but with the modern hardware to back it up.