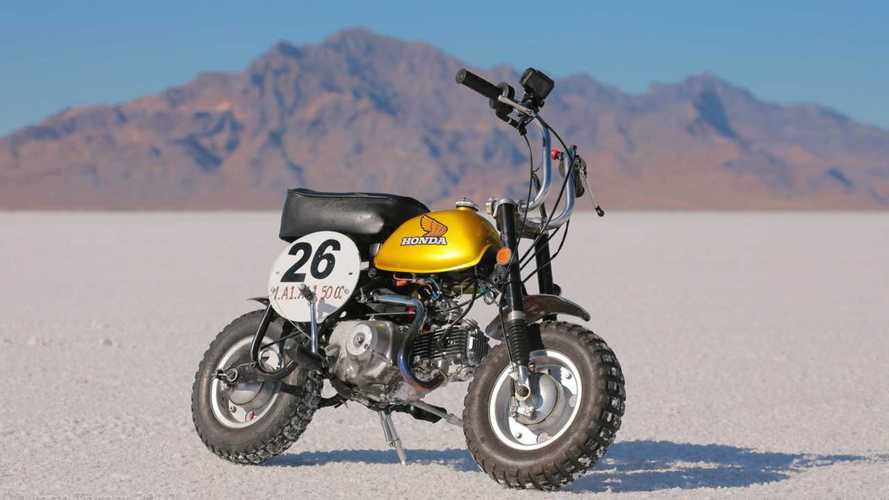 The Bonneville Motorcycle Speed Trials are underway, and riders continue to set new world and class records. According to the FIM, track conditions have steadily been improving day by day, so competitors have been able to go faster and faster. Generally speaking, the 2019 Bonneville meet has been more difficult for big bikes so far, and smaller bikes have had an easier time getting to grips with the salt.

That Time a Ural Set a Land Speed Record at Bonneville
⠀

Thursday August 29, 2019, is the final day of 2019 BMST events. On Tuesday, Day Three, Milo Keller was halfway to setting a new 50cc record aboard his Honda Monkey. In fact, he had it dialed in so close that he almost ran out of fuel on his down run.

Unfortunately, when Keller went to make his return run, the Monkey flat out refused to start. He ended up pushing it back to the pits, rather than completing his run. He  had no plans to quit trying for 2019, though.

So far, Keller has not broken that record—but there’s still one day left. If the conditions trend exhibited over the past four days continues, today might offer the best run opportunities of the entire week for competitors.

He’ll have some serious work to do to beat the new 50cc FIM Land Speed Record set yesterday, though. Rider Takashi Chikakane rode a special-construction Honda Super Cub to a new world record of 63.185mph (or 101.686 kmh). It’s unclear if Keller was on pace to beat that speed before his Monkey stalled for the return run the day before.

At any rate, Chikakane’s tale is an instructional one. Up until yesterday’s record-setting run, he and his team had been plagued with issues, and had made several earlier attempts that simply didn’t pan out. The lesson here—both for Keller and for everyone else—is to just keep trying.

Day five of the BMST is a shorter day than the others on the schedule, but there’s still time to make magic happen in all classes—and maybe we’ll see more world records set, as well.