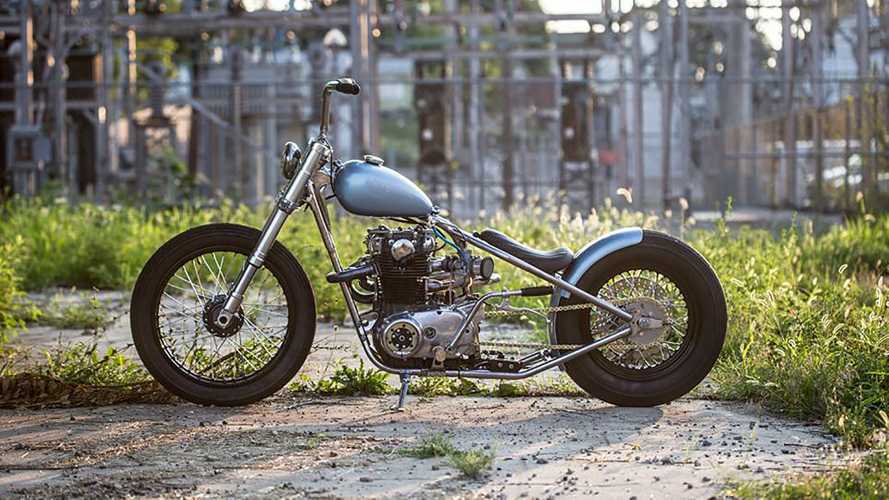 While most custom shops nowadays dive into the highly trending café racer and scrambler aesthetics with their builds, a handful of shops opt for something entirely different. For FKKMOTO, this meant going beyond the obvious and thinking a little outside of the box.

The Gallinella Is An Elegant Bathtub Fairing Custom Interceptor 650
⠀

It all started with a 1972 Yamaha XS650. The good-looking retro model would have been a perfect contender to be turned into a modern-not-so-modern scrambler or even a café racer with a bubble fairing and clip-ons—you know, the kind of customs we see 90-percent of the time. The guys at FKKMOTO decided to go down a different path instead. They turned the XS into a bobber, because why not? This required a number of significant modifications, including  dropping certain parts altogether.

The frame had to be adapted to the change of personalities so the guys at FKKMOTO opted for a Voodoo Vintage MK21 chassis, a part designed specifically to fit the XS’ original frame. The bobber frame opens up the core of the bike, creating a lot of negative space which gives the motorcycle an airier look. The change of frame made the bike longer by 4 inches and lower by 3.

The original front suspension was swapped for a Suzuki Gixxer inverted fork, attached to the XS’ original 19-inch spoke wheel. Notice anything missing? Doesn’t that wheel look awfully big? Yeah, that’s because the guys removed the front brake set up. At the back, the wheel has been swapped for a Harley-Davidson Sportster 16-inch circle, fitted with a massive Toxico six-piston brake grafted from a Hayabusa. You know, to make up for the lack of stopping power at the front.

Another usual feature found on a bike was dropped: the clutch lever. It was replaced instead by a suicide shift—which inverts the functionality of the clutch and the gear lever. Usually, the system involves activating the clutch with the right foot while the gears are selected with the hand using a car-like stick selector located on the side of the bike. In this iteration of the system, there is no clutch pedal, but instead, a lever added to the gear selector—like having a handlebar that you reach down to on your side rather than up. The guys made that call to stick with the clean, minimalistic look of the bike—the absence of a brake and clutch levers and wires result in a very “naked” handlebar. The throttle wiring runs inside the handlebar tubing.

The 654cc twin-cylinder engine itself remains pretty much the same, but received a thorough overhaul with new seals and gaskets, new pistons, and new rings. The carburetors have been swapped for a 2-into-1 unit teamed with a Mikuni VM36 carb. To keep the airy look of the design, the guys removed the battery, replaced instead by an electric box.

A new teardrop gas tank and pair of short dual exhaust tips complete the look. The banana saddle rests on the rear wheel guard. The paint color was a sentimental choice—it is meant to be a tribute to one of the builder’s grandfather who passed away before the build was complete. The color is inspired by the color of one of his shirts. Is that sweet or what?

The bike was completed a few years ago but remains a staple of the shop’s collection, which it proudly flaunts every occasion it has.