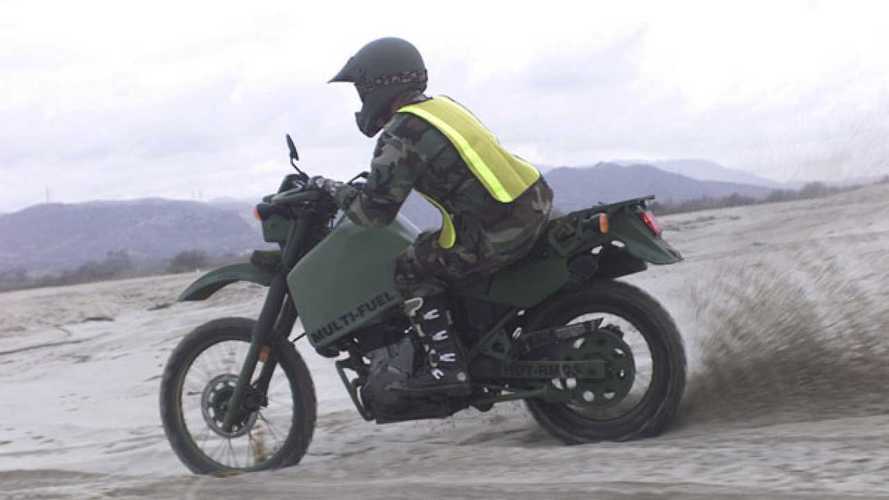 These KLRs were converted to diesel engines and put into military service.

When I first posted pictures of my newly acquired olive drab Kawasaki KLR 650, many people asked me if it was the diesel version made for the military. Alas, mine is an ordinary petrol-powered KLR with a rattle can paint job covering the badly faded factory paint. The story of the diesel KLR is an interesting one, however, and shows how this particular model really can do practically anything.

Military motorcycles have been around since the invention of the motorcycle. Despite a lack of armor, their size, speed, and maneuverability make them a great choice for messengers and scouts to get from place to place, as well as allow Indiana Jones and his father to make a daring escape. The modern military is no exception and the US Marines were looking for a bike that could go practically anywhere in any conditions. They had one rather unique requirement, though: it must run on JP-8, a formulation of jet fuel similar to kerosene and diesel. Everything from Humvees to jet planes run on JP-8. This means that only one type of fuel has to be transported to the front lines, rather than separate fuels specific to tanks, motorcycles, and Harriers. No one made a diesel motorcycle, because the performance characteristics of diesel engines are generally not a good match for them.

Enter Hayes Diesel Technology, a military contractor that had been working on motorcycles since the 1970s. Having years of experience with off-road bikes, including consulting for Honda's off-road racing and enduro teams from 1976 through 1979, they started with the venerable Kawasaki KLR 650, a bike with a proven ability to handle just about anything you can throw at it. They removed the original Kawasaki gas engine and replaced it with a diesel engine of their own design. They added a few other common KLR modifications, like an AGM battery, Progressive suspension, Acerbis six-gallon fuel tank, wider footpegs, and a skid plate, then sold it to the US Marines and other NATO allies as the M1030M1.

Though it matches the displacement of the original 650cc thumper, its performance characteristics are quite different. The M1030M1 is extremely sluggish off the line, taking a while to get up to speed. The main benefit, however, is fuel economy, a whopping 96 mpg. That's double the mileage of the original bike and nearly 600 miles of range on a single tank of fuel.

Hayes had planned to offer a version of this bike for civilian use, but military demand was so high that all resources were devoted to the military version. From time to time a military surplus model pops up for sale. These are quite rare and highly desired. They often sell for more than the original KLR 650 did when it was new. This is truly the motorcycle you want for the zombie apocalypse. This is the bike Daryl Dixon should be riding. He could probably even modify the optional rifle case to fit his crossbow.