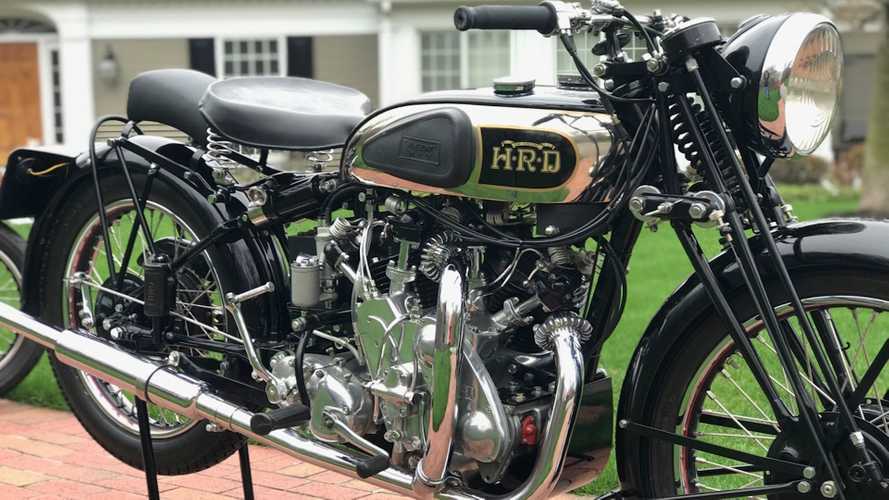 Seven prized Vincents and a Grigg are slated for liquidation.

There’s nothing like a good barn find. Something about precious vehicles being discovered after sitting neglected and dormant for decades, with seemingly nobody aware of the prized machine’s existence or value is really captivating. Unearthing a single forgotten two-wheeled treasure is noteworthy, but coming across a collection of more than half-a-dozen highly sought-after, more-than-half-century-old Brit bikes, including six Vincent Motorcycles, is another thing altogether.

This horde of seven two-wheelers was unearthed in a Los Angeles area warehouse following the death of the owner. According to Liquid Asset Partners, the liquidation firm tasked with selling the newly-found bikes, the owner—who the Michigan-based company’s press-release describes as “reclusive”—brought the collection of bikes over from England in the ‘60s in a shipping container when he moved to the US. The find also includes a massive assortment of spare parts which were also brought over from the UK—an assortment that has only grown over the last 60-or-so-years.

Here's a look at the seven bikes.

Following the start of the Second World War in ’39, Vincent ceased production of its Series-A HRD models. Production didn’t pick back up until 1946, after the end of the global conflict. At that point, the model was replaced by the Series-B. The Series-A first debuted (in prototype form) at the 1936 Olympia Motor Cycle Show and was instrumental in helping Vincent to establish a solid presence and reputation in the motorcycling world. This feat was helped along by racer, Stanley “Ginger” Wood who in 1938 broke the lap record at England’s historic Donington Park Circuit aboard a Series-A HRD.

Called the “gem of the collection” by the sellers, this ’38 Series-A HRD Twin looks pristine and is undoubtedly the most valuable unit out of the seven. Supposedly only some 78 units were ever produced over the model’s two-and-a-half-year run, with between only 40 to 50 (depending on who you ask) specimens known to remain. This makes the Series A one of the company’s most collectable models ever produced. In fact, according to our buddy Paul D’Orleans of The Vintagent, a 1938 Series-A HRD Twin is the 19th most valuable two-wheeler on the planet.

Even more refined than its predecessor, the Series-C offered improved suspension that saw hydraulic dampers stuffed between the spring boxes out back and Vincent’s proprietary “Girdraulic” fork. Reportedly, only 42 Series-C specimens were ever made before it was phased out upon the arrival of the (you guessed it) Series-D in 1955. All that performance came at a price and not only were Vincents markedly more expensive than offerings from competitors, but the company reportedly sold each unit at a loss.

This 1950 Vincent Comet is currently in pieces. Appropriately described by the liquidation company as a “basket-case”, this machine may be in pieces (if not shambles), but is still likely to bring in a small fortune when it goes up for sale. In 2015, a 1926 Brough Superior SS100 Alpine Grand Sport of a basket case brought in $400K when it crossed the auction block. Back in March, we told you about another Brough Superior basket case that yielded $561K at an auction—granted, the puzzle was more complete and in better shape (obviously).

While all of the bikes in this find are all equally notable, there’s one example I find particularly intriguing. A year or so prior to the company going under in 1955, Vincent unveiled enclosed versions of the Rapide and Shadow, known as the Black Knight and the Black Prince. Phillip Vincent thought the public would be thrilled about bolstered wind protection and enclosed powertrains. They were not. The company also experimented with a third enclosed model, this time based on the Comet and called the “Victor”. Supposedly only one was ever built.

Seemingly unable to get his hands on a genuine Victor, the now-deceased owner of this esteemed collection opted to build his own replica using a Comet. The press release states that this is a “perfect one-of-a-kind replica” though I’m curious how in-depth this project was. Did he go through the trouble of updating the chassis? Improving the rear suspenders? Adding the new oil-tank? How about the addition of the coil ignition and Amal Monobloc carburetion. These were all features found on the other enclosed Vincent models which were used by the Thought Police in the BBC’s ’55 production of Orwell’s 1984.

Built just one year before the plug was pulled on the company, the final Vincent models represented the pinnacle of the brand’s technology and engineering which were objectively quite ahead of their time. By the time tings wrapped up, models were all breaking the triple-digit-barrier. These later models may not be as valuable as some of the earlier models, however, they’re still highly sought-after bikes that fetch exorbitant amounts at auctions.

Despite being the fastest production bike in the world upon its release in 1946, Phillip Vincent still felt the Series-B Rapide was hiding even more potential up its sleeve. The number of privateer racers modifying and tuning the already potent V-Twins lead Vincent to believe there was demand for an even higher-performance, sport variant of the Series-B Rapide. This lead to further development of the machine already capable of 110mph right out of the crate.

Phillip along with the firm’s chief engineer, Phil Irving, took a batch of Rapides and tricked them out, upgrading, amongst other things, the cams. Con-rods, cylinder heads, and a bigger set of carburetors were thrown on as well. The changes afforded a total of 55hp translating to a top-speed of 125mph. Supposedly only around 70 units were produced before production halted upon the release of its successor, the Series-C. This particular Series-B example was produced in 1948—the same year Rollie Free’s performed his famous bathing-suit-clad 1948 world-record run on a massaged Series-B.

Grigg Motorcycles was a little-known British marque that operated from 1920 through 1925. The company built a relatively impressive bike for the time, though it was never able to establish the presence needed to remain profitable/sustainable. It lead to the factory's doors closing for good after only five years of operation. Supposedly very few units were sold, making survivors today incredibly seldom finds. Compounding this is the fact the company spent its first two years building scooters only. The only Grigg proper motorcycles were produced in from 1922 to '25.

Thought to be only one of four surviving examples in existence, this particular Grigg specimen is the only one fitted with the 696cc V-Twin the firm introduced in ’23. The inverted hand-levers, the antique headlamp, factory wicker luggage, and girder fork leave little doubt as to when this seldom-seen-scoot left the Middlesex factory.

Some of the world’s rarest motorcycles buried in a forgotten Los Angeles warehouse collection are now for sale with viewing in Grand Rapids, MI on May 22, 2019.

Grand Rapids, MI – A rare collection of Vincent and Grigg motorcycles are now in the care of Liquid Asset Partners, based in Grand Rapids. These were discovered after the passing of a reclusive owner, after being hidden away for decades. The bikes include six Vincent Motorcycles, a one of a kind Grigg Motorcycle, and a lifetime collection of rare parts. The gem of the collection is a 1938 Vincent HRD Series A Twin, coined by many as the rarest and most collectible motorcycle in the world.

“We could not believe what we found,” said Bill Melvin. “We made arrangements to view the collection which was buried in an industrial building near Los Angeles. Within a day, we were on site taking notes and photos to document this rare find. It was difficult as the bikes were crammed into tight quarters mixed with parts and other miscellaneous items. It was the personal hoard of a lifetime.”

The headliner of the collection is the Vincent HRD Series A Twin. Known as a “Series A” it carries a prestige similar to the rarest Duesenbergs, with only 78 ever built and possibly fewer than 40 in existence today. Most of the surviving Series A motorcycles are in museums, with only a few coming for sale each decade. Built in 1938, with a top speed above 100mph, it was a superbike with many beautiful hand made parts, which showcase the mechanical work of art. The engine has a wonderful V-Twin rumble and power that surprises anyone lucky enough to try it.

The collection also has a 1923 Grigg Blackburne V-twin engine 693cc which is extremely rare, the only known survivor in the world with the 693cc V-Twin. Only four Griggs of various models are thought to survive. The craftsmanship, attention to detail, and history of this piece of art are sure to be destined for a museum.

Included is a one-of-a-kind Vincent Series D Victor (Comet) replica. The Victor was one of the last models created by Vincent in 1954. Only one was made before the factory closed. The previous owner was the only person to spend the time and money to recreate a perfect one-of-a kind replica of this rare model.

The bikes were brought over in the early 1960’s when the previous owner decided to leave England as a young man. He came to the United States with a container of belongings which included a number of old motorcycles and a vast collection of parts.

Bill Melvin’s father (Bill Sr) began in the business back in 1974 by liquidating motorcycle dealerships and distributors. They are known throughout the motorcycle world as experts on the subject of antique motorcycles, parts, memorabilia and as formidable buyers of rare models such as Brough Superior, Crocker, Vincent, Flying Merkle, Pope, Indian, Harley-Davidson, and more.