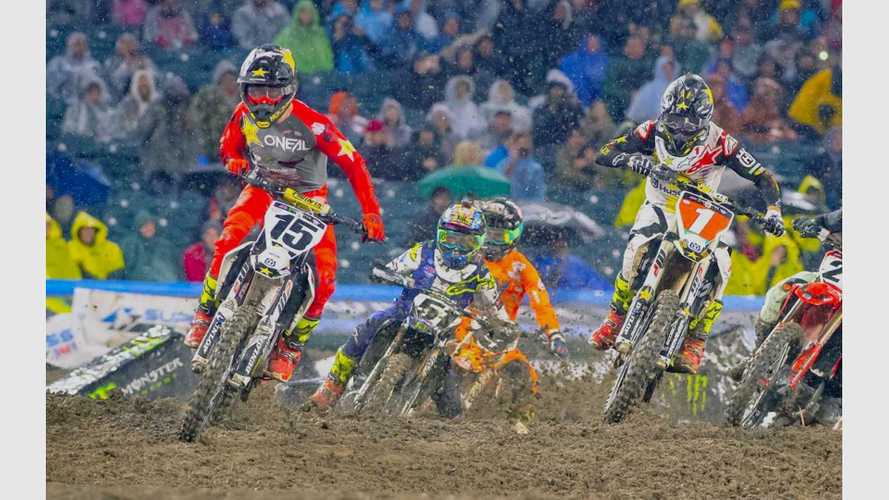 It never rains in Southern California, except when it does, which made the first round of AMA Supercross in Anaheim a wet, technical, mess. At the start Dean Wilson, a privateer who has never won in the big bike 450cc class, got the hole shot which meant he was the only rider not getting mud thrown in his face. It was looking like a real Cinderella story, especially when a hard charging Malcolm Stewart went down while in second, but it couldn't quite last. We're pretty sure Dean's cell phone is going to be ringing with sponsorship deals Monday morning though.

It isn't quite correct to say that Dean Wilson was just a man in a van with a plan. But he also wasn't getting the sort of fat sponsorship checks from Artificial Grass Liquidators that Justin Barcia is getting from the folks at Yamaha and Alpinestars. We were also wondering why he was so good when the going got wet, but Google informs us he is from Scotland, so riding in the rain is second nature to him.

Wilson lead the first 14 of 20 laps on his Husqvarna, before being passed by Barcia, then apparently couldn't see for all the mud and tossed his goggles, which slowed him further. Ken Roczen ended up with second, and Eli Tomac took third, leaving Dean in a respectable fourth, still his best ever finish in the 450 class. Cooper Webb finished fifth, but it is worth mentioning because he crashed in turn one and charged his way back from last place, setting the fastest lap in the process.

Here are the highlights from the no less exciting 250cc race, where Colt Nichols won his first ever 250 Supercross race. Adam Cianciarulo lead going into turn one at the start, but couldn't turn or stop and went right off the track, then fought his way back, only to tangle with RJ Hampshire, twice, and run off the track once again. It was a miracle that he managed to finish in fifth. Dylan Ferrandis and Shane McElrath took second and third, and RJ Hampshire took forth, despite being knocked over by Cianciarulo at one point.

You may think you don't care about racing, but it is hard to watch the spectacle that is Supercross and not end up a fan. Unlike MotoGP or even World Superbike, the motocross bikes the pros use are these days are pretty much what you can buy at your local dealer, with only the massive skills of the rider making all the difference. Dedicate 30 minutes to watching one of these races when they are on the NBC Sports Network.

Or better yet go see it live at your local stadium. At some venues tickets start at less than $20. For that price you get four heat races, two last chance qualifying races, and a main event in both 250 and 450 classes. Plus there are more pyrotechnics than a KISS concert, and all sorts of other entertainment.