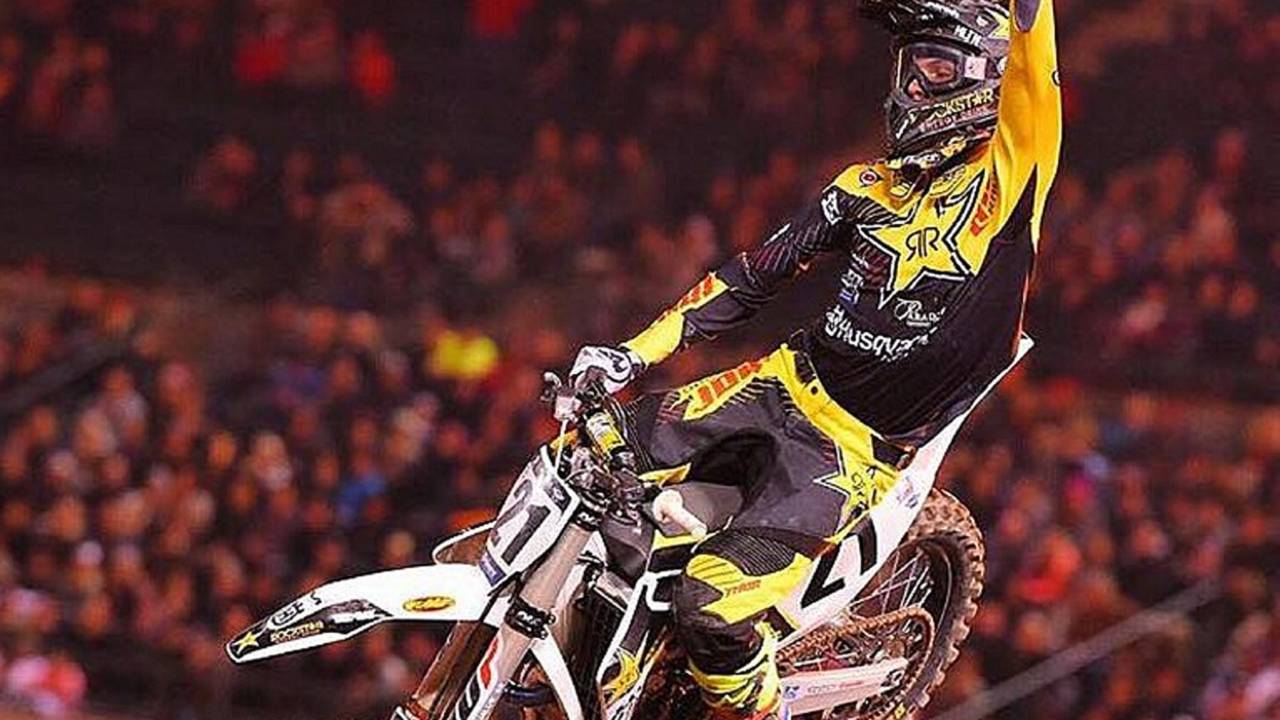 They say people watch hockey for the fight and NASCAR for the crashes. Well, fans of both would have enjoyed the AMA Supercross at Anaheim Saturday night. Amazingly enough, no one was seriously injured to the point of breaking bones and missing races.

This first video above is a crash at the start of a 450cc heat race, which nearly ruined Ken Roczen's evening, but amazingly enough only hurt his pride (he finished 5th later in the main event). Ryan Dungey, the defending champ was also involved in a little spill in this heat, then ran into James Stewart in the semi, but also made it to the main. Despite crashing again on lap 3 of the main, Dungey managed to finish 2nd.

The thing everyone will be talking about is the actual fist fight that broke out between Weston Peick and Vince Friese in the semi. Here's the replay:

It's hard to blame Weston for what he did though, seeing as how Friese had already run him off course in a heat, racing for a transfer spot. To then be used as a berm by the same guy in the next race, putting both of them in the dirt, would have even the most levelheaded rider seeing red.

Plenty of guys on the track and in the pits likely cheered when this happened, since even one of the Fox commentators mentioned that guys are tired of "getting Friesed" like that. For the smackdown, Peick was fined $5,000 by the AMA and suspended from the next event.

I have been a big fan of James "Bubba" Stewart for years, and was excited to see him back, running the third fastest lap time of the night in qualifying. He was suspended in 2015 because he had failed to inform the AMA he was taking prescription Adderall, which showed up on a drug test. Unfortunately for him, Dungey t-boned him on the second lap of the main event.

Reports I'm seeing are saying nothing is broken, but he was knocked out and does have a concussion, so he will have to be fully evaluated before being able to race next week in San Diego.

If you're not a fan of crashes and fights, or motocross in general, you really ought to watch one race live in person—it will change your mind. If you only ride a street bike or ride a dirt bike occasionally, the way these guys seemingly defy gravity and other rules of the physical world are mind boggling. They can skip a 200+ lb bike across the top of a set of bumps the same way a stone skips across the surface of a pond. Here's the highlight reel:

The other thing worth mentioning about Anaheim round 1 is that Jason Anderson got his first 450 main event win on a Husqvarna, which is a first for them in the big leagues of motocross since back in the 1970s.