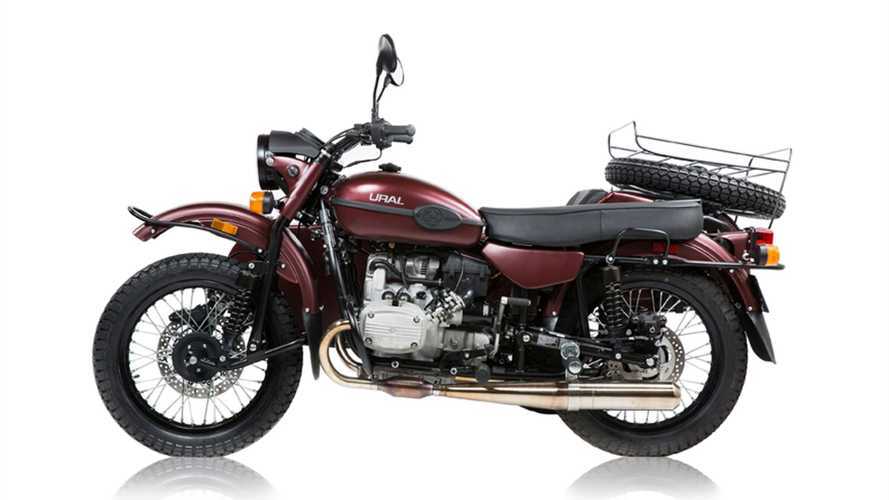 A new engine for the old warhorse.

Ural's had a pretty busy fall. First, the company announced it high-flying LE AIR drone carrier. Then there are the rumors of some super-secret skunkworks project swirling about. As if that wasn't enough, now the little old bikeworks from Irbit has unveiled its thoroughly overhauled 2019 lineup, and man, there's a lot to unpack here. Let's check it out, shall we?

First and foremost, we say goodbye to the retro-cool, trad-forked M70 for 2019. Going forward, the lineup will consist of the nimble, one-wheel-drive cT and the burly, two-wheel-drive GearUp adventuring rig. While I'm personally sad to see the M70 go, discontinuing that bike allows the company to focus its attention on its core bikes and anything else that might be coming down the pipe. Ultimately, it's a bittersweet farewell. Hopefully, that extremely cool old-school instrumentation the M70 had will be available as an option on future bikes, 'cause I love it.

Now for the really big news. You know how Urals have that BMW-derived, 750cc boxer engine, right? Well, that venerable old mill got a huge upgrade for 2019, the largest change to the engine in years. The top end was completely redesigned with an eye toward improved cooling and longer life. To that end, it got deeper cooling fins, an improved bore with more precision honing to improve ring sealing and oil retention, completely redesigned intake and exhaust ports, and new rocker covers. That's not all.

The pistons are all new as well. They're now gravity cast NASA388 (aluminum/silica alloy) pieces rather than the old-timey forged pistons. They have Teflon-inlaid skirts designed to reduce friction, tightened tolerances for the upgraded, high-tech rings, and a ton of space-age coatings (plasma-sprayed Molybdenum? manganese phosphate? What the hell did were they building, a B-wing?), and a hard-anodized crown and top ring groove to increase high-temperature longevity. Basically, all this LaForge-class technobabble adds up to pistons that are stronger, lighter, and better able to stand up to the engines heating-cooling cycles.

The final improvement to the boxer's top end is a brand new, high-tech fuel injection system. The biggest change here is that, instead of an old-school speed density sensor, the FI system now has a modern throttle position sensor which improves throttle response about one-million percent. Other EFI improvements include new Keihin throttle bodies, increased system pressure, an upgraded in-tank fuel pump, and better idle speed control. Not too shabby, Ural. Not too shabby at all.

The top end wasn't the only part of the engine that got some love. The old boxer got an all-new oil circulation system, too. A new oil pick-up combined with a redesigned sump has improved oiling and increased oil capacity without sacrificing ground clearance. That last part, the ground clearance, is pretty important for the off-road GearUps but maybe not so much for the citified cT.

“Our goal was to improve performance and reliability while meeting or exceeding ever-tightening emission control requirements,” the company said in recent press material.

The last upgrade for 2019 is a relatively small one compared to all the work on the engine, but it's still definitely notable. The wheels on all 2019 Urals are fully interchangeable due to a new hub design. In addition, the rims are made from a new, stronger aluminum alloy.

So there you have it. The new Urals have better, more efficient engines, smarter fuel injection systems, and truly interchangeable wheels. Keep your eyes peeled for a First Ride featuring yours truly and a stunning burgundy-colored 2019 Gear Up in the coming week.