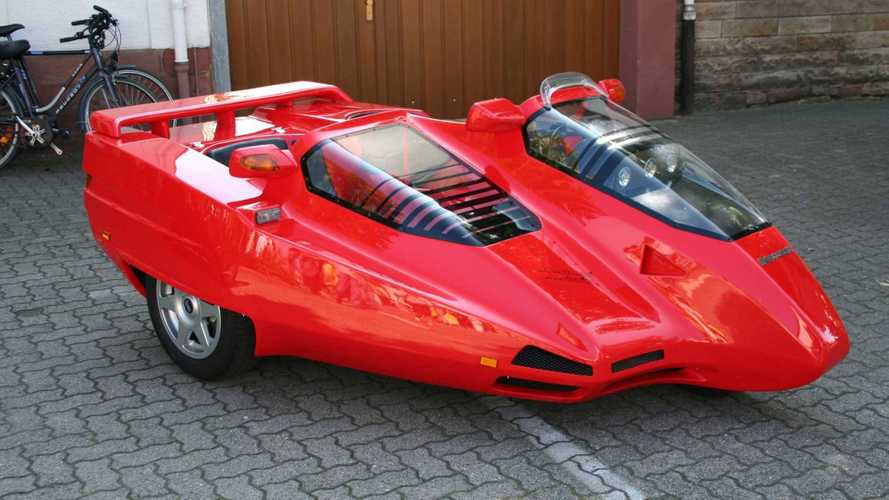 You all ever hear of Michael Krauser? That's okay, neither had I until this very morning and now I think he might be my favorite motorcycle designer ever. Even better than Craig Vetter. Well, weirder anyway. So, who is this Michael Krauser character? Let me tell you.

Back in the 50s, Krauser was a works BMW sidecar racer. He was good at it, too, as his wins at the National German Championships in '55, '56, '57, and '58 attest. Eventually, he moved from the saddle to team management. In the 70s he branched out again to what would really make his mark on the motorcycling world—designing and building killer motorcycle luggage.

The bike luggage business wasn't enough for him, though. He'd always dreamed of building and selling his own motorcycles and, in the late 70s, he decided to take a crack at it. He'd amassed a pretty good nest egg selling saddlebags to BMW riders and he had decades of experience with the Bavarians so he decided to base his new bikes on Beemers. On the R100RS, to be exact. He started cranking out hand-built custom BMW road bikes—which I'll tell you about later—then, in the late 80s, he started building sidecar rigs.

These weren't just any sidecar rigs. Oh, no. These were fancy-shcmancy sci-fi sidecar rigs powered by BMW "flying brick" inline fours. The Domani, which we're talking about here, is just one of his amazing creations, and just look at it.

Right? It's just... I don't really have the words for how blown away I am by this thing. It's bonkers. I was in junior high when these things were produced, and they look exactly like the weird mechanical creations I doodled in my notebooks while I was supposed to be doing homework. The Domani is powered by a K 1200 engine that puts 150 horsepower to the ground via a five-speed gearbox. Wrapped around the Beemer mill is a custom designed torsionally rigid tubular steel frame with a structurally integrated sidecar frame. The front suspension is a hub-centered setup—because what late-80s cyberpunk motorcycle is complete without a front swingarm?—and the rear has double-wishbone independent suspension. The entire thing is wrapped in super radical aerodynamic bodywork that looks more like a spaceship than a sidecar rig.

Despite how it looks, the Domani is definitely more a trike or three-wheeled car rather than a sidecar rig. The suspension and drivetrain gives the Domani very car-like handling, especially on the wide automobile tires with which it was sold. It even has a trunk that spans the whole rear of the machine and was offered with an optional spoiler to complete the look. You could even get them turbocharged, which is just an extra layer of lunacy.

Information on the Domani is pretty scarce, but the sources I could find suggest that only around 100 were made and the majority of these were sold in Europe and Japan. It will come as a shock to no one that the Domani was huge in Japan, a country that knows a thing or two about fine engineering and sci-fi/cyberpunk weirdness.

So there you have it, the Krauser Domani—It's real and it's spectacular. Here are a few videos out of Japan for your edification. Oh, and if you see one of these lying around let me know. There's a sidecar-shaped hole in my garage that needs filling.