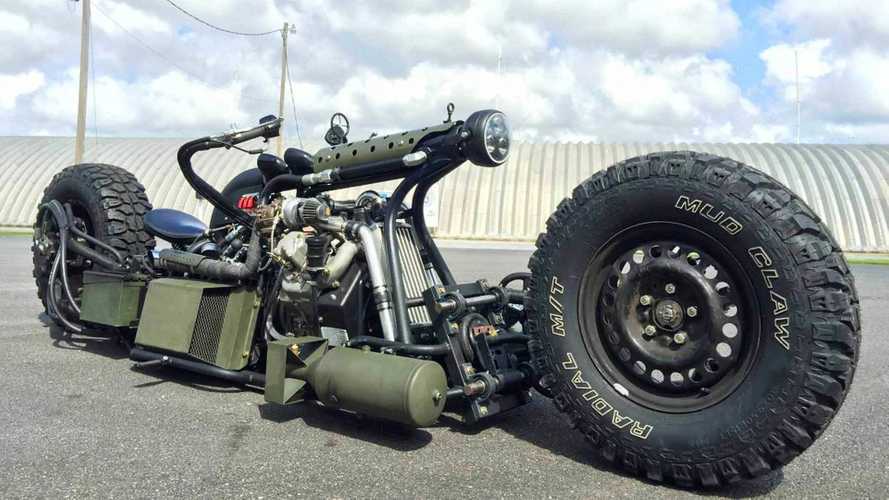 What do you get when you mix a small Chinese diesel engine, a handful of Japanese car parts, some know-how, and a ton of elbow grease? Something wonderful.

Let me introduce you guys to Sam Turner. Sam's a real cool dude from way down south who used to make his living as a diesel mechanic for the US Postal Service. He started riding motorcycles at a tender eight-years-old and learned to weld at 12. To say that Sam has some serious fabrication skills would be an understatement. Now that I've introduced you to Sam, let me introduce you to his magnum opus—the hand-built, diesel-powered, hydrostatic, all-wheel-drive motorcycle.

Beautiful, isn't it? The heart of this bodged-up beast is a Yanmar 840cc direct injection diesel V-twin out of an old cement mixer. The engine breathes through a pair of RHB31 turbochargers which are kept cool by an intercooler out of a Suzuki Swift. Initially, Turner wanted to use the diesel mill in a diesel-electric set up to power an electric generator which would have powered the wheels individually. This turned out to be, uh, prohibitively expensive since the electrical systems were all way too pricey for the project.

Undeterred, Turner switched to a hydrostatic setup where the wheels—which are steelies off a Toyota Camry, by the way—are turned by hydraulic hub motors powered by a hydraulic gear pump. The hydraulic hub motors are Eaton 200 series models out of a salt spreader, and the Prince fixed-displacement gear pump is out of a log splitter. My man used all the parts of the buffalo building this thing. Top speed is an incredible 98 miles per hour. No word on horsepower or torque, but since this is a diesel I assume the latter value is at least a three or four-digit number.

Use of the hydraulic hub motors required custom, single-sided suspension which Turner designed himself. It uses a pair of 2,500 pound Airmaxx air bags backed up by coilovers and controlled by a custom leveling system that gives the suspension about a foot of travel. At rest, the bike just sits on its frame rails. No kickstand required! At just over 11 feet long, the steering was a tricky issue. Turner settled on a cable-operated push-me-pull-you kind of setup that uses cables connected to the front spindle and the rear suspension. The cables are controlled by a pair of control arms where the handlebars would be on a regular bike, and the whole system operates like the old Green Machine big-wheel.

All this shadetree wizardry is hung in a hand-bent frame made up of a little of everything Turner had laying around the shop. The final product is a post-apocalyptic looking thing that's an unholy amalgam of the Harzer tank bike and the Batpod. Once it was finished, he painted it in bed liner and OD green paint, fabbed up some milspec-looking bits and bobs—heat shield for the hydraulic tank, ammo can battery box, jerry can fuel cell, etc.—and called it a day.

This thing rules. Hard. It's ridiculous in all the best possible ways and, best of all, actually works! You can ride it down the street no problem, although if I'm honest I don't know that I'd want to. Turner upheld the best and most hallowed traditions of the shadetree mechanic and garage inventor with this bike, and I salute him for the effort. If you'd like to know more—and why wouldn't you—check out Turner's Instagram and YouTube for more info on this and other mad science projects he's working on.